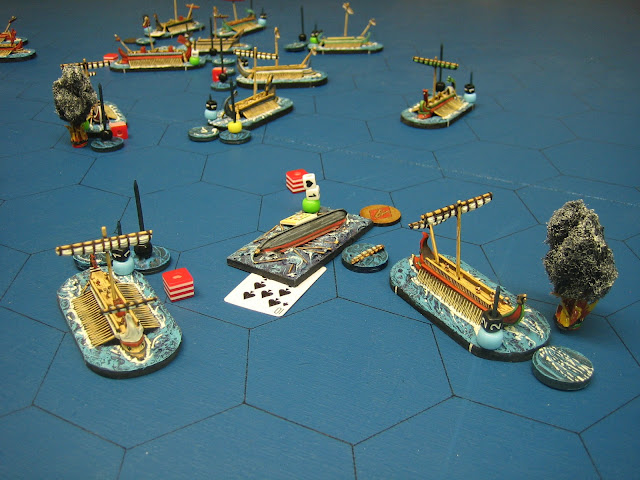 The second evening gaming this battle proved to be less interesting than the first. This was mostly due to the nagging suspicion that the rules were flawed. It soon became an evident truth.

There were a couple of great moments. Antony's decares flagship was sunk by a racing cataphracted trireme - it needed a 12 (on 2d6 +2) to sink it and got it, even though it was set on fire in its approach. Soon afterwards another cataphracted trireme performed a perfect 'anastrophe' (a rake followed by a fast turn around and a ram) on a quinquireme. A nice period special rule for the most manoeuvrable galleys.

There were a few more boarding actions than in the first week (largely due to better grappling rolls by galleys of Antony's fleet) and a couple of prizes actually changed hands but, most of the ramming attempts failed. There seemed to be far too much bumping about without any effect - a bit like dodgems at a fair, it was all good fun but pointless.

However, the biggest problem with the game was the missilery. There was simply far too much of it, making it a tedious process; it was far too effective. Although I didn't keep an accurate count, for each ship sunk by ramming two vessels went down in flames due to incendiary missiles. In fact, it actually occurred to Peter (playing Octavian's fleet) that a better way of sinking the enemy was to catch fire then grapple an enemy ship in the hope of the fire spreading to it. To his credit he didn't play this way, though given the rules he must have been sorely tempted. The game, more competitively played, could easily become like a battle using Elizabethan fire-ships rather than an ancient galley battle. 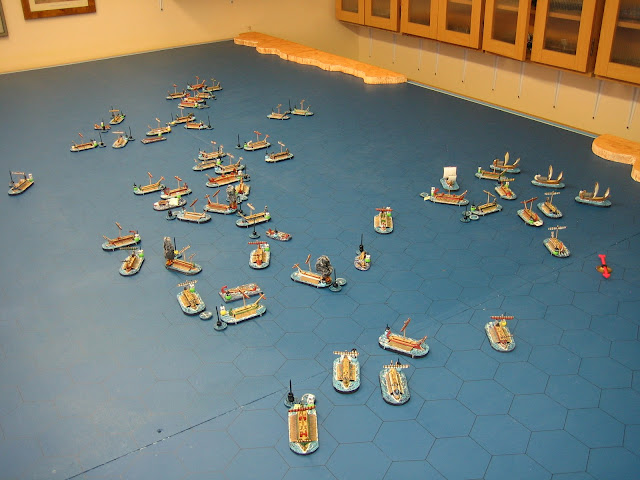 After the second nights play, with a clear victory looking impossible to achieve, I called an end to the experiment. On the night, thirteen galleys were sunk (about a third rammed), three more had been captured and were still afloat, and two more (the octares and a heptereme) were totally disabled (each having been raked twice).

I am making the following experimental changes to the rules.


Lastly, I am going to completely change to the shooting rules.

My next post will be the new Actium set up. I'm not sure if it will be played by the guys or by me solo. 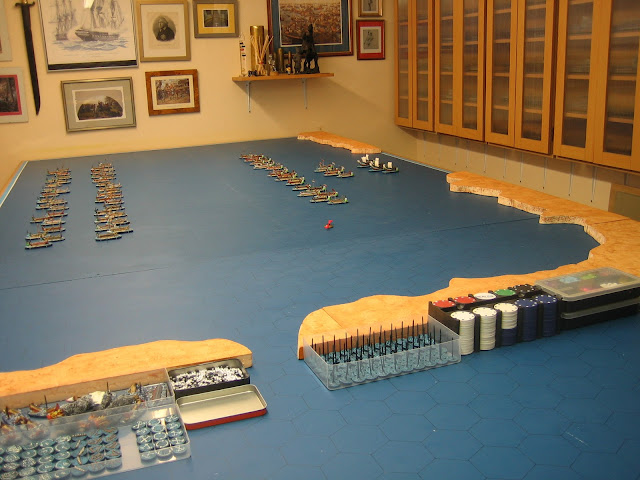 It sounds like the basic rules mechanisms are reasonably sound, but require tinkering to reflect your understanding of the relative importance of the various components of Galley warfare - moving/maneuvering, engine fire, small arms fire, ramming/shearing oars, and boarding (melee). The changes you're considering should influence the effectiveness of each. Play testing awaits!

I face the same issues with 16th century Galley warfare, and need to get my rear in gear to revise my own rules for 15mm galleys. Given the scale, these will be more tactical in scope and detailed in resolution.

Way cool! Some extremely valid points! I appreciate
you writing this post and also the rest of the website is also
really good.
Thank You