The Battle Of Drepana 249BC. 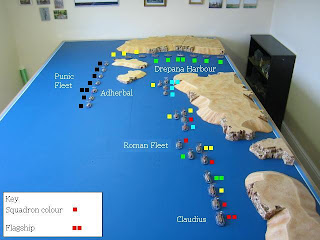 I thought that I would start my blog with a refight of The Battle of Drepana. This was a naval engagement during the First Punic War.

In 250BC the victory at Panormus encouraged Rome to besiege the Carthaginian stronghold of Lilybaeum on Sicily. Rome's fleet of 200 ships was to blockade Lilybaeum and prevent reinforcements and supply by sea.

This effort was thwarted by the Carthaginians who managed not only to re-supply Lilybaeum, bu deliver 10,000 reinforcements as well. After bolstering the defences the Carthaginian fleet broke out of Lilybaeum without incident and sailed up the coast to their naval base at Drepana.

In 249BC Publius Claudius Pulcher, with Lilybaeum putting up stiff resistance, decided to mount a surprise attack on Drepana. If successful, the loss of the Cartaginian fleet and its naval base would put additional pressure, perhaps even overwhelming pressure, on Lilybaeum to capitulate. Claudius made all the right preperations for the attack. He reinforced his galleys with fresh rowers (many of whom had died in the siege lines) and put to sea at night to avoid being spotted. The fleet, of around 130 ships, hugged the coastline, but in the darkness the ships lost contact with each other. At dawn the fleet's line astern formation had become jumbled and straggling. Claudius' flagship was at the rear.

As the disorganised Roman Fleet approached the element of surprise was lost when it was spotted by shore patrols some way down the coast. Adherbal, the Punic admiral, at once manned his ships, bolstered by a large number of mercenaries to act as marines, and set sail out of the harbour to confront the Romans at sea.