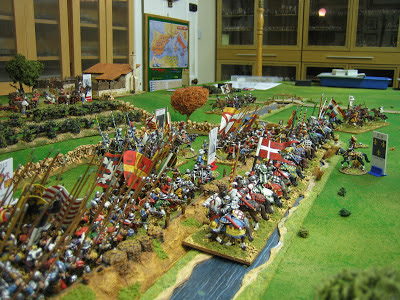 Having shaken itself out into two supporting lines the French gendarmerie charge the defences.... 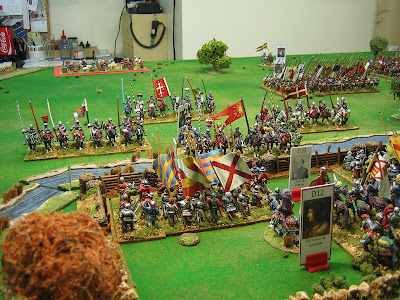 ....before being forced back in disorder. 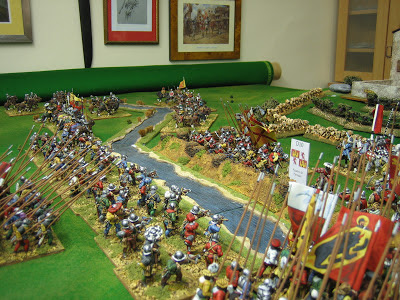 The Swiss and French infantry charge whilst d'Alegre's command tries to outflank the Spanish position. 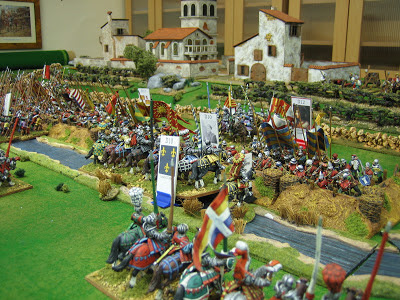 D'Ars, leading a desperate charge in person, falls at the ditch. A classic case of having your D'Ars kicked. 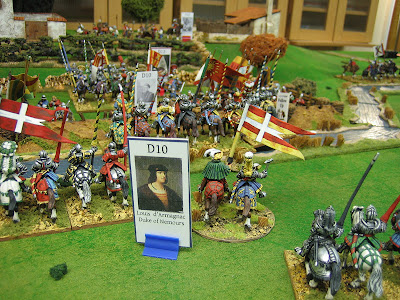 Nemours rides into the fray to restore order. 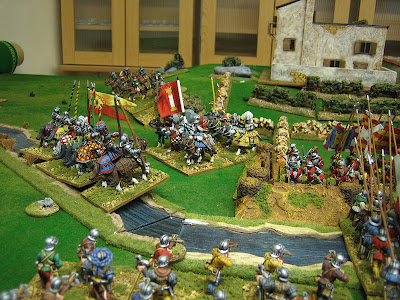 Heavy fighting on the French left is going their way - French gendarmes being gallantly, and effectively, supported by Gascon missilery. 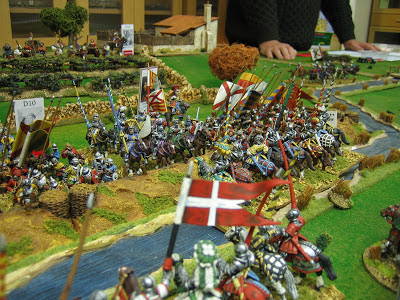 At the entrenchment the fighting is at it's height. The French are making some progress, but they are taking heavy casualties. 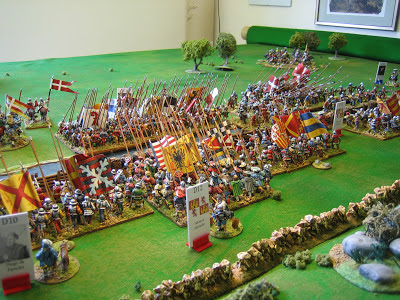 The French are spent, and start to withdraw. 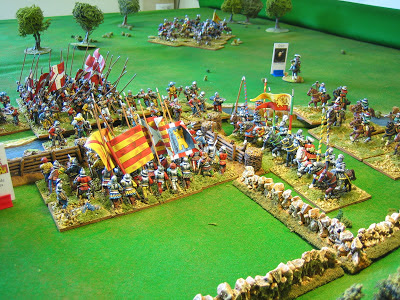 Only on the left are the French now threatening to take the entrechment.... 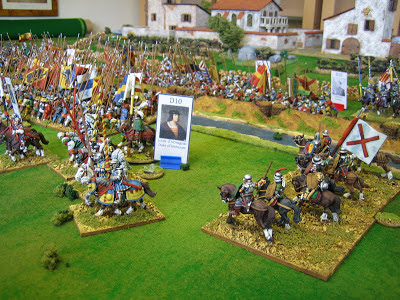 .....but the right wing collapses and the battle is effectively at an end.

This Battle was much more closely fought than last time. If the Spanish had not had a string of high dice rolls at the critical moment it might have been very much closer. The French will always be hard pressed to win this battle (which is just as well) but, with luck on their side, it might be possible. The French player (that would be me) also made a big mistake early on: I spent far too many morale points keeping d'Ars' cavalry fully intact, when partially might well have been enough. Also, just as a footnote, not one Stratagem was successfully played.
at November 08, 2012 4 comments: 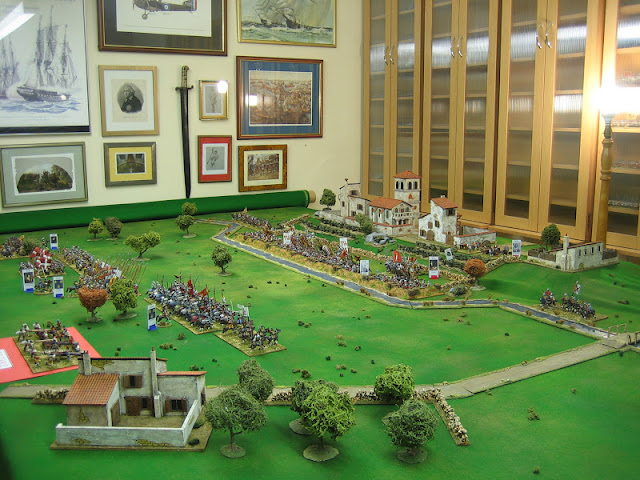 
This battle took place during the war for Naples, between France and Spain, early in the Great Italian Wars. 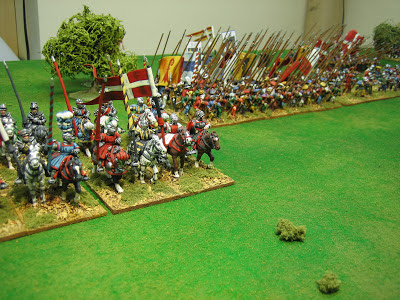 Following their defeat at in July 1502 it was the French, under the Duke of Nemours, who took the offensive in the following spring. His intention was to use the usual combination of gendarmerie and Swiss pikes to run down the Spanish in one determined rush – it was a tactic that the French had achieved much with. 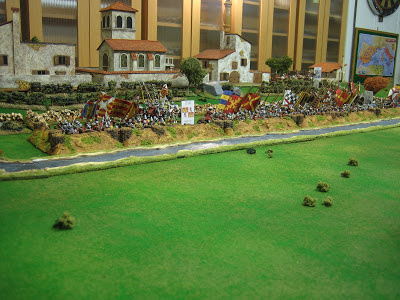 The Spanish commander was Gonzalo de Cordoba, victor of . He was well informed of enemy movements, and marched his army 16 miles inland from to await the approach of the French who were coming up quickly. He stopped his army, in the early afternoon, at the foot of vine covered slope beneath the small town of . 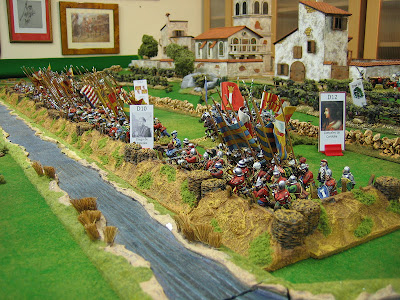 In the short time available before the arrival of the French Gonzalo set his troops to widen and deepen a small stream at the foot of the slope and use the spoil to build an earthwork. The earthwork was strengthened with vines and stakes grubbed up from the vineyards above. 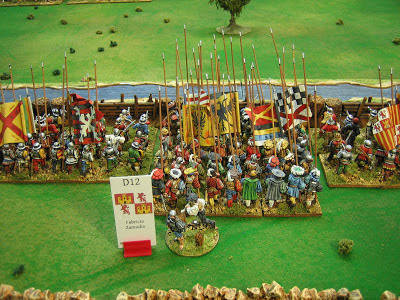 Gonsalvo placed the 2500 Landsknechts, which had been sent by Emperor Maximilian, in the centre of his line. These had been recently placed under the command of Fabricio Zamudio, an experienced Basque leader. 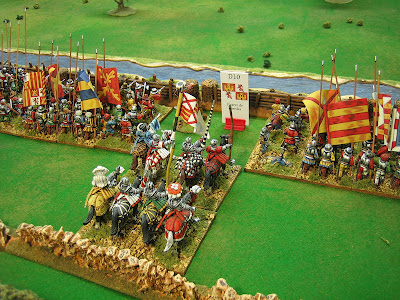 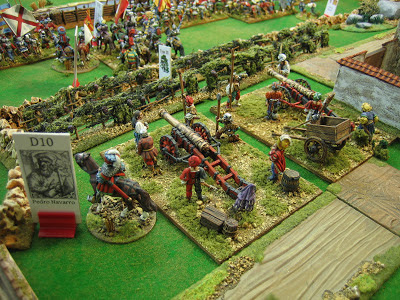 He set his small train of artillery (13 light guns under Pedro Navarro) at the top of the slope and sent out his Genitors (light cavalry) to worry and delay the Duke of Nemours. 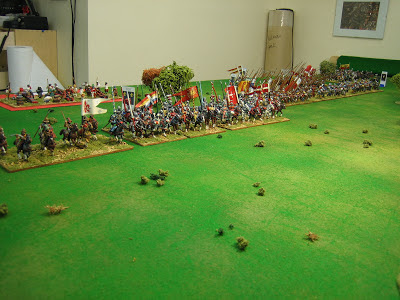 Late in the afternoon, Nemours arrived before Cerignola. He had not reconnoitered the Spanish position because of the interference of the Spanish light horsemen. He was completely unaware of the presence of the earthwork before him. It was late in the day. The French held a very quarrelsome council of war. Nemours favored deferring the action until the next day in order to rest his tired soldiers before the fight. Many of the French captains, led by Yves d’Algre, urged an immediate attack. 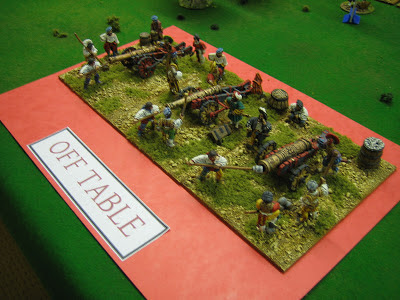 The Battle of Cerignola would be unlike the Battle of Ravenna nine years later: where French artillery, facing a similar deployment, decided the day.

Before his artillery had come up into position,  Louis d'Armagnac, Duke of Nemours, gave in to his junior officers and ordered his army to deploy echeloned from right to left, for an immediate attack. 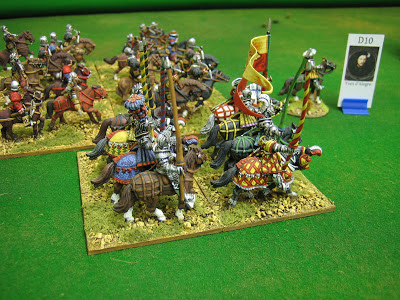 On the refused left, he placed four hundred knights and the bulk of his light cavalry. This, the rearward, fell under the command of Yves d'Alegre. 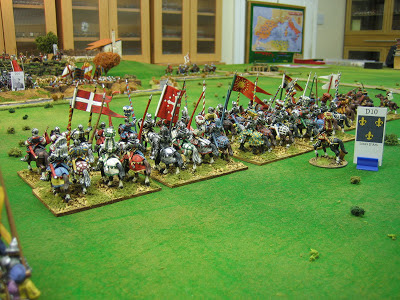 To the right of his echeloned line he placed the bulk of his 2000 heavy cavalry and some stradiots. This, the vanguard, fell under the command of Louis d'Ars. 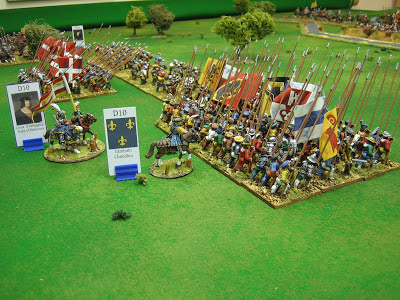 In the centre Nemours deployed his mainward. This was made up of 3500 Swiss and a similar number of Gascon and other infantry. They fell under the command of Tambien Chandieu. 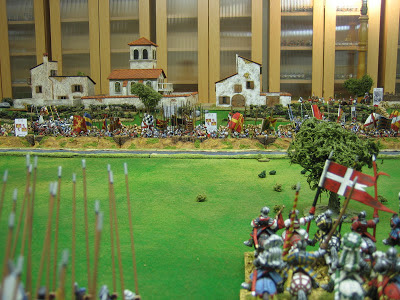 Late in the day, 28th April 1503, as the shadows lengthened, everything was set for one of the most tactically important battles in history. It would demonstrate the power of firearms and the vital importance, being 'the great leveller', they would play in future wars. 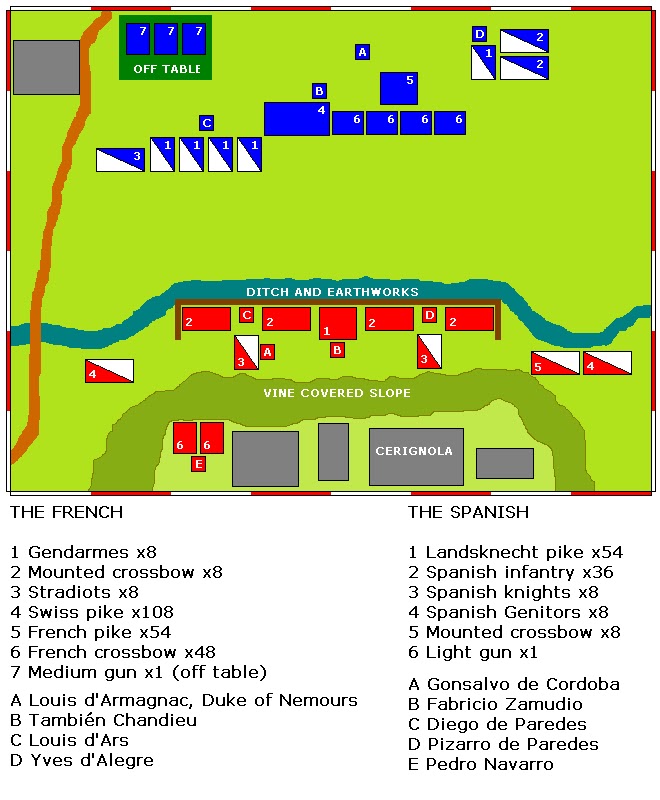 The Spanish player’s mission is to hold the earthwork against French attack until darkness falls, and the French are forced to withdraw. Darkness will fall after the completion of two full turns. Turns ending on an equally rolled initiative are ignored regardless of the number of cards turned.

The Stratagem 1 sequence card allows Gonsalvo de Cordoba to move, and if within command distance, rally 2UI and the vexation of an infantry unit that has suffered due to the explosion of munitions at the entrenchments. The Spanish player does so with the words "Courage, don't you see the first victory beacon is lit?"

*No command figure present. Duke of Nemours commanding by default.

Special rules & notes
To make this scenario work, the French must be forced to attack in a determined manner. To ensure this, the French player's victory conditions are brutal. The French player must have destroyed or routed at least three defending infantry units, or have thrown every enemy infantry away from the entrenchments after the completion of two game turns. Turns ending on an equally rolled initiative are ignored regardless of the number of cards turned.

The Stratagem 1 sequence card will cause a single enemy infantry unit manning the entrenchments, and in contact with a French unit, to become vexed and lose 2UI. This represents the explosion of munitions at the earthwork during the melee.

The Stratagem 2 sequence card indicates the arrival of French artillery into the field (historically it never arrived and was captured on the road after the battle). For the artillery to arrive the French player must make a successful check using Army Die Vs Army Die. The artillery must deploy together; it must not be deployed within 12” of an enemy unit; it must be deployed within 18” of the French baseline. 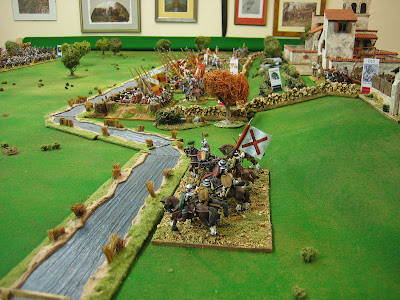 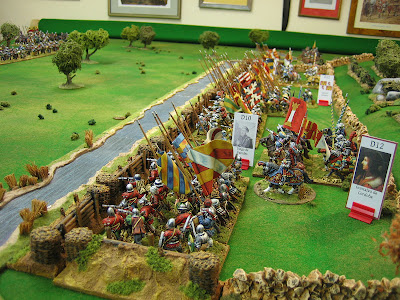 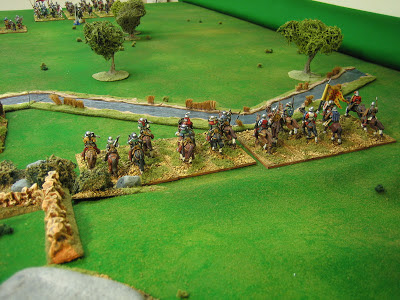