Two years ago I said that I would rework my Pike and Plunder campaign rules (a four player Italian Wars map and table-top campaign system) following intensive play testing. Unfortunately, due to more pressing projects, work on Pike and Plunder virtually ceased. As you may already know (I'm taking a year off new projects) time has now become available to revisit unfinished work; Pike and Plunder has been first on my to do list.

I have changed much of the Pike and Plunder to make it a far more flexible campaign system. It will be a two to four player campaign (originally it was for four players only) and will be usable with any set of table-top rules. It is, following a reworking of the the turn sequence, playable by mail; thus allowing players to save valuable gaming time, by concluding campaign moves, before meeting up to fight the table-top engagements. Several other elements have also been tightened up and expanded upon. The original version of Pike and Plunder gave a very enjoyable campaign, but I think it is a much better, and totally different looking, beast now; even the map / playing board has changed.

It will, if all goes to plan, be ready in about a month or so. When it is, I will pass it on to Martin Stephenson of Vexillia Miniatures for final editing and publication. Then it will, though much later than I'd originally planned, be available as a download. Version 1 was, and will be, available as a free download, version 2 will not be; though we will endeavour to keep the cost low.

If you have been unaware of Pike and Plunder, and the Ilkley Lads Italian Wars campaign before now, you can take a look at it here: 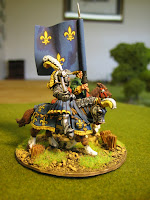 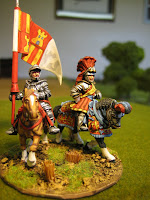 Before I look at what special rules and notes that will be required to play this scenario, I think that a summary of the battle, as it was fought in 1522, is required.

THE BATTLE
The attack started at dawn. Giovanni dei Medici’s Black Bands were sent forward to clear the Imperialist pickets. These pickets were Genitor light cavalry, and after a short and possibly quite fierce fight these were pressed in. The two columns of Swiss were now sent forward with artillery support. The French plan was probably to subject the Imperialist ramparts to a bombardment (as at Ravenna) before the Swiss were sent into the assault, but the Swiss, in their bravado, refused to wait and attacked immediately – both columns racing each other towards the enemy. The Imperial artillery played on them all the way in, causing 1000 casualties amongst the densely packed columns.

Meanwhile, half (400) of the French Gendarmes on the French left, under the command of Lautrec’s brother Lescun, made a flanking march down the Milan road towards the bridge behind the Imperialist position and became engaged with the Milanese.

Back at the sunken road, the Swiss descended into the hollow to be faced by an 18 foot bank and continuous volleys of arquebus fire from the earthworks above them. The first three or four ranks of the columns perished almost to a man in these vital seconds. The Swiss, trying desperately to surmount the obstacle now became subject to enfilade fire from the artillery platforms. Some of the Swiss, clambering over their dead and dying comrades made it to the top but were forced back down into the ditch by the timely intervention of the Imperialist’s supporting pike men. Leaving 3000 casualties behind them the Swiss slowly withdrew to their start line (– Slowly Withdrew!)

Lescun had by now got himself over the bridge and into the rear of the Imperial encampment. But his force was, with the failed frontal attack, too small to cause much damage. Colonna dispatched some cavalry to repel him, which with the aid of some Milanese they managed to do.

The Battle of Bicocca was effectively over. 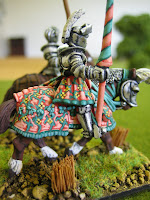 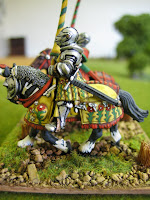 MY THOUGHTS AND CONCLUSIONS
I will approach this from the point of a game scenario rather than just going through the motions of a ‘historical’ re-fight. My reason is quite simple: If you only allow the historical actions to take place it will not be much of a game! I am also going to leave much of the precise mechanics out of my notes as we all use different war games rules. I use Piquet, which is very flexible when it comes to tailoring rules for scenarios. 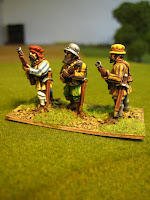 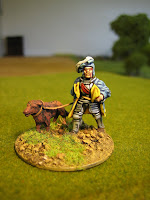 The Actions of the Swiss
These are important to this game. Some method of forcing the Swiss to advance must be used. This should not be a fait accompli; there must be a chance of ‘what if’. My chosen rules, Piquet, use a sequence card deck, I will add two ‘uncontrolled advance’ cards and use a die roll to determine if the Swiss rush forward or not on each as it appears, removing them if they pass the test. But if one goes they should both go, at full pelt, until forced to retreat.

The Sunken Road and Ramparts
These must be, for movement, the hardest terrain allowed under your rules, possibly with a die test to surmount. But traversing them should not be impossible – just very hard. I would class the artillery platforms as even harder to get over because under most rules artillery does not defend very well in melee, and the Swiss chose to attack the ramparts not the platforms and there must have been a reason for this.

The defenders should get cover bonuses, good superior position modifiers for fire, and good terrain advantage modifiers for melee.

The Lack of French Support.
You can readily see by the narrative of the battle that all the troops deployed behind the Swiss, except for Lescun’s Gendarmes, seem to have done little to support them in their desperate attack. Even Lescun’s flank attack seems a feeble attempt in the face of such odds. This, in my view, is the key ‘what if’ in the battle.

The Venetians came under severe criticism for not pressing an attack on the right. They for their part they complained that the ground to the right of the Imperial position was too boggy to make an approach. I don’t know that they even tried, but the French player should be allowed to develop this attack. I think that the best way, is to declare the boggy ground as ‘probably impassable’. When the first Venetian unit contacts it roll a D6. On a result of 1 - 2 it is impassable; 3 – 5 it is very difficult terrain; 6 it is ‘much drier than it looked’ – it is only difficult terrain. (Piquet classes terrain by factor, V impassable, IV very difficult requiring a test, III difficult, II moderate, I easy).

Lescun’s attack was probably the most inspired French move of the day. If supported, even after the Swiss assault had failed, it might have done much harm; at the very least it would have given the Imperialists something to think about. I would allow the entire body of French infantry and cavalry, or the French cavalry and Medici’s Black Bands to try this approach, but not both – one must stay in front of the ramparts. Historically the Black Bands covered the Swiss retreat and the army’s withdrawal; so perhaps they should support the Swiss at the ramparts with fire. 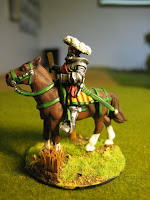 These are my conclusions and thoughts on how to make such a historically one sided affair into a good game. You probably have others and I would like to hear about them. Please use the ‘comment’ button below if you do.
at May 01, 2009 5 comments: