Save £0.85 on the price of ordering each magazine individually + FREE UK P&P.Available only while stocks last. 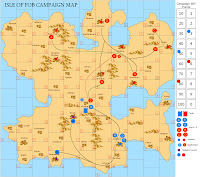 The map above shows the positions at the end of turn 4 (2nd turn of the game). The red line indicates the retreat of Seljuk army B.


From the Chronicles of Kermit the Hermit:

.....With renewed spirit the armies of the Franks sought to expand from their small bridgehead. Reynald de Winscale [D] took, by force of arms, Noaheum from those loyal to the emperor. The King, following the victory of his nephew, swiftly seized Ghazzan from the Turk......


........The King's nephew Baldwin [B], having won his victory over Sheik Mahand [B], did go in pursuit of Gudrupee, seeking to catch him far in the northwest and bring him to battle. As to bait a trap he took Despina Khatun from the him by force, but the Seljuk King did not take the bait and was content to look on from Balunyas.......


........Meanwhile, in the north of Fob Mustapha Camel [C] and his brother Mohammed Ali [D] marched south. Mohammed bypassed the King, seeking to threaten Lampron. Mustapha, being cunning and possessed of martial spirit, joined his forces with those of Sheik Mohand [B] and marched against King Chernobyl......


.......Chernobyl had marched north with an army recruited for speed of action rather than power, and his force was largely made up of cavalry and local Armenians. It was against this band that the full force of the Seljuks came to bear close to the walls of Ghazzan........ 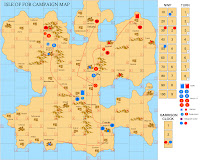 The map above shows the passage of events during the turn. Army pins with black letters show start positions, those with yellow letters end positions.

The Chronicles of Kermit the Hermit is not detailed account of campaign events. The campaign turn was peppered with raids, spying, national will morale challenges, logistics tests, etc. These are over too quickly for me to record exactly and their effect is abstracted into the campaign game mechanics. Suffice to say, that the rules are now almost perfected. Miniature Wargames magazine has expressed an interest in publishing them as part of the Ager Sanguinis series so, hopefully, copies will soon be available.
at February 26, 2010 No comments:

Email ThisBlogThis!Share to TwitterShare to FacebookShare to Pinterest
Labels: Isle of Fob campaign reports, The Chronicles of Kermit the Hermit 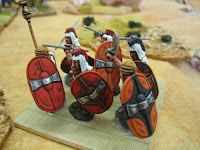 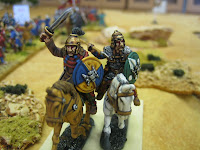 This month it has been hard to find the time to do much painting. As well as commercial painting jobs (I'm booked up until October-ish) I've been working on a series of articles for the wargames press. But I did find a bit of time. Enough to knock out 16 Gallic cavalry (lots on white horses - the stands will all get mixed up together when all 80 are done) and 48 Spanish infantry.

You will note that the shield pallet for the Spanish was limited to 4 colours. When I do the next batch of 48 one colour will be replaced by two others, and so on, until all 8 batches are complete. Like the Gallic cavalry they will then get mixed up together.

All figures are by Renegade. The bull's head standards were kindly provided by Gripping Beast.
Anyway, the figures..... 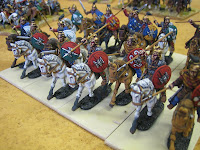 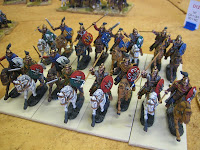 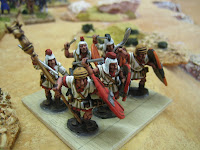 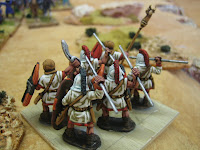 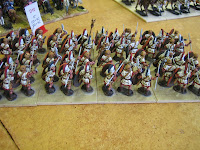 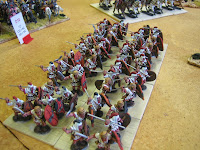 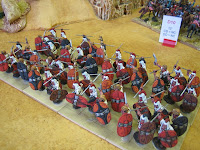 Next up, 48 Libyan spear men. Half finished already, and which will bring this months quota to 108. Still on target.
P.S. Excuse the crusaders in the background, I have not found time to put things away!
at February 24, 2010 5 comments:

From the Chronicle of Kermit the Hermit. 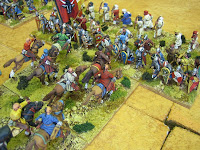 .....And so it was, that when Spring arrived, King Chernobyl set to cut out for himself a Kingdom. Sending his forces westward and northward he sought first to overawe Irtysh and Noahaeum, covering this move with another force that set itself at Kinana. Sending envoys to the towns with promise of fair treatment and concessions to their faith he thought to bend them to his will. The townsmen, chose to remain faithful to the Emperor and sent back the envoys with insulting replies. When the armies arrived before the walls of the towns they found the gates barred and the walls garlanded with elderberries. Before spring was out, suffering much from poisoned wells and a good defense, the King was forced to withdraw his sickly and weakened forces back to Lampron. His covering force at Kinana finding themselves isolated built a castle there to better withstand the attentions of Gudrupee....
.....Gudrupee meanwhile was more worthy of the title King. The inhabitants of Fob at first thought to emulate the people of Irtysh and Noahaeum; but following the sack Eschiva and Hethoum all other resistance crumbled and wherever the forces of Gudrupee went thereafter they found the gates open. Before the first months of summer were over a sizable part of the Isle fell under his sway......
......Feeling himself strong, Gudrupee ordered an attack on the Franks at Kinana......where his forces were soundly beaten.......
The Campaign map shows the movement of armies up to the battle of Kinana. Lines in black are spring moves. Lines in green are [first turn of] summer moves. 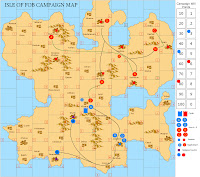 The Battle of Kinana.
Virtually nothing has been written of this battle. Outside of the initial deployments and that it proved to be a crushing victory for the Franks little is known. Only vague glimpses of the passage of the battle can be ascertained and they are given below. 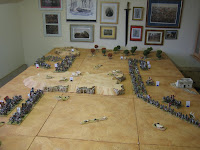 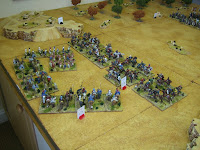 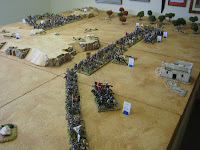 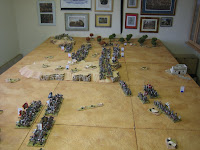 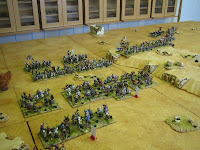 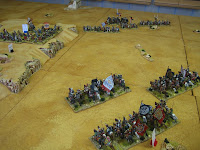 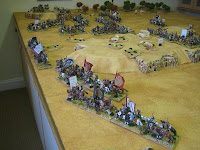 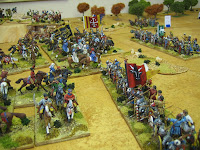 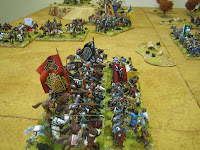 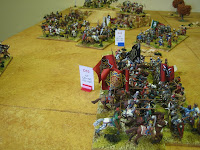 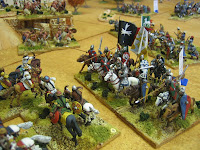 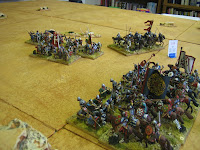 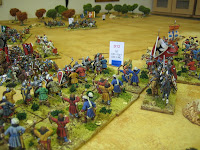 Email ThisBlogThis!Share to TwitterShare to FacebookShare to Pinterest
Labels: Isle of Fob campaign reports, The Chronicles of Kermit the Hermit

Storage. The perennial problem that we all face from time to time.

Finding my wall units (actually DVD /CD cabinets) were full, and my Punic Wars collection had no home to go, to I scanned the net for a new solution. This is what I found. By adding two more shelves (see below) the cabinet will hold all 2000+ figures. 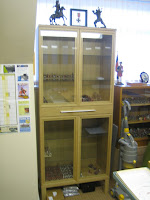 This is a BJURSTA cabinet from IKEA. Bought sight unseen, I am delighted with it. The cabinet stands 179cm high, 80cm wide and 40cm deep. What is more important is the shelf size. These are 76cm wide and 36cm deep - perfect! Each glass shelf is capable of bearing a 25kg (55lbs) load and the cabinet comes with four (making six shelves in total - 2 are wood). 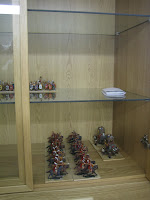 The glass shelves are adjustable and more can be added. Extra shelves are also amazingly cheap at £4 each. Extra shelves cannot be bought on line and they are not linked to the cabinet in the catalogue. Search for 'glass shelves' of the right size - they have their own name (which I can't remember off hand). They are there. This cabinet will have 8 shelves (total) when I can get to IKEA to pick up the extras. 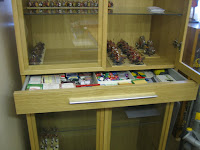 The cabinet comes with a shallow drawer in the middle - perfect for dice and such storage.

So how much are these cabinets? Just £199 each.

Following a new use of rooms, elsewhere in the house, I will be shipping my bookcases out of my war games room into the room next door. The space, you've guessed it, will be taken up by two more of these beauties. Each will have 10 shelves. That will be enough to store six thousand more figures. My figure storage problem, for the next ten or so years is solved!
at February 09, 2010 4 comments: