A bit of recycling: Islamic mangonels for the Crusades

Edit: When I linked this post on TMP, Col.Campbell (hi, Jim) commented on the name 'mangonel' being applied to this type of siege engine, thinking it should be called a 'trebuchet', specifically a 'traction trebuchet'. For some reason, I've always called them 'mangonels'. Luckily for all, both of us are right, and Jim posted this interesting link about the "Torsion Mangonel Myth" explaining why.

Before I get to the models, let's get the big issue out of the way. I know that throwing engines were not used in field battles. However, artillery, in any period, can be great table-top fun. I know because, I have a couple of onagers with Frankish crews (Gripping Beast Normans range, I think) which have seen the table a couple of times. 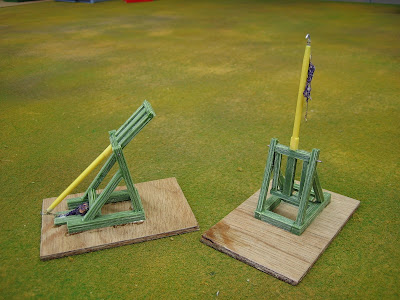 The basic design for these models is taken from various sources including pictures and models of Chinese mangonels. The scale I can only call 'table-top scale'; they were made to look just big enough to look like practical pieces of siege equipment.
The model, with arm up, is 110mm tall overall.
They are made from recycled plastic.
The throwing arms are plastic pins (I can't remember their original use).
The green plastic beams are made from the plastic bases that come with plastic figures, glued together to make small pieces of plastic sheet. There are two thicknesses: three layers thick for the base frame; two layers thick for the upper structure.
The plastic is soft enough to be cut into 'planks' with a modelling knife. Each piece was sanded with fine sand paper after cutting to get rid of the burrs.
I added wood grain in two ways. At first I used the tip of a blade but, this was too slow. To speed things up a lot, I simply dragged the plastic over rough sand paper. 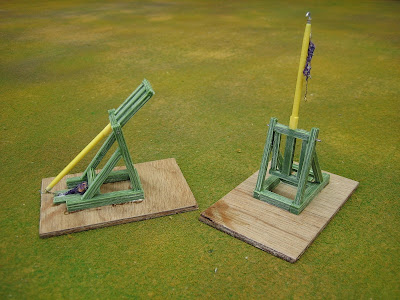 The throwing 'bag' is made from a piece of netted ribbon, and a few bits of wire drilled into place as axles and throwing hook finish the pieces.
Start to finish, they took about two hours to design (as I went along, more or less), and make.
The bases, like all the bases for my crusades stuff, is 4mm plywood. It seemed like a good idea at the time but, is now one I regret. Cutting 4mm ply with a Stanley knife is a hastle I can do without. The bases, for scale, are 60mm x 90mm. 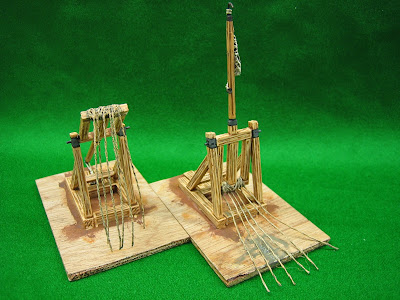 Here they are with the ropes attached. These things were man powered.
There should probably be more ropes. However, as I can't find figures in poses suitable for actually pulling the ropes, I thought six would be sufficient to express the basic working principles of the thing.
The ropes are cotton button thread: a single thread has been wound around the beam; the actual ropes are two threads twisted and glued (PVA) together before being glued into place on top of the cotton around the beam. 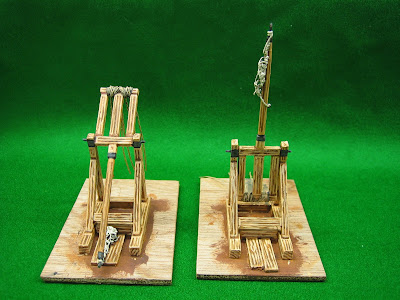 All in all, I'm quite happy with the way these turned out.
The best crew I've found so far are Gripping Beast shepherds. Each model will get a crew of four figures idly standing about the place. The figure with the staff / crook over his shoulder will be given a longer pole with a hook on the end - he's the guy who hooks the throwing bag after firing to drag the arm back down into the launching position. 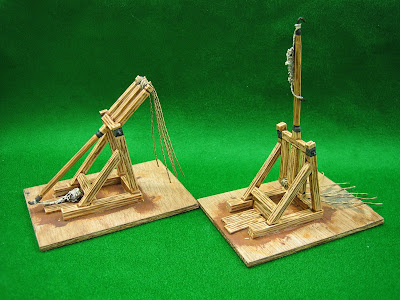 Neat little models that cost next to nothing. Something from scrap. 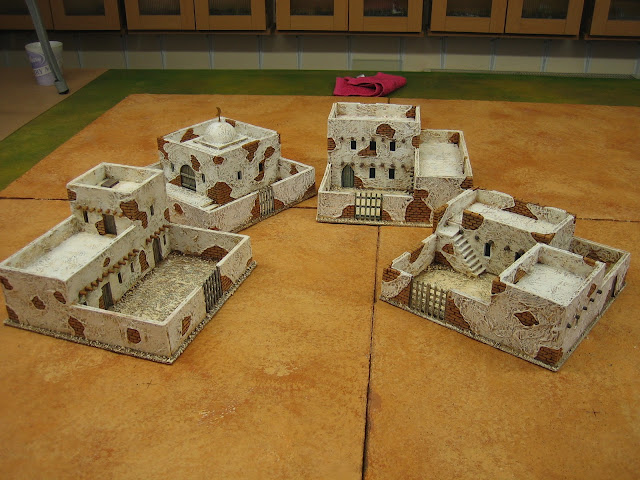 Having reorganised and rebased my Crusades collection (units are now on three stands, each 60mm frontage) for To the Strongest rules, I decided to re-do my desert buildings so that they could hold units more comfortably. There were several ways I could have done this but, after much thought, I pitched for building modules that fully embraced the grid and TtS box sharing rules. I made four modules including a mosque.
Each section is 210mm wide. My grid boxes are 200mm and ideally the building modules should have been the same but, during the design process I realised that the unit frontage plus the thickness of the walls wouldn't quite make this possible - so I added 10mm.
All the buildings were all made in the same way. They are based on 2mm MDF (or hardboard from the back of a broken picture frame - waste not want not). The walls are constructed from 5mm foam board. Doors are balsa wood and the gates are made from the wood of ice lolly sticks (because the latter is much stronger than balsa). The dome is a plastic lid (I found in the street last year and picked up) with a crescent made from a spare shield. Brickwork is old greetings card / cereal box (I keep some of this about the place too). Roof supporting beams are cane barbeque skewers. Plaster daub work is heavy body artists acrylic (dark blue and left over from basing ships for a client - Hi, VDS). Ground texture is artists acrylic, a bit of sand and grit and cat litter (unused: I do draw the line somewhere). All are painted using household emulsion (when you choose your room colours, think about what you can use the leftover paint for afterwards) and artists acrylic paint and ink.
They take the units quite nicely, as you can see here. 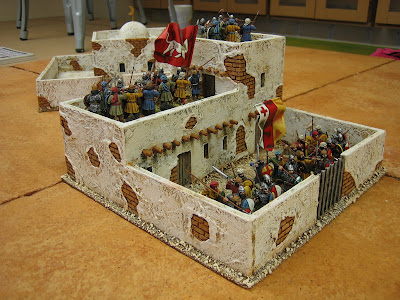 Building with tower. This is a good looking, very basic design.
All the buildings are built as fully enclosed 'compounds'. I got the idea for this from footage of the goings on in Afghanistan a few years back.
A secure compound structure seems fitting for built up areas in 'lawless times': I imagine compounds would be the normal format for most rural buildings in the Holy Land during the times of the Crusades.
Note two new flags for the Armenians. The mountain lion on red features in a film, as does the small cross. A white red and yellow tricolour is the flag of modern Armenia (horizontal stripes?). 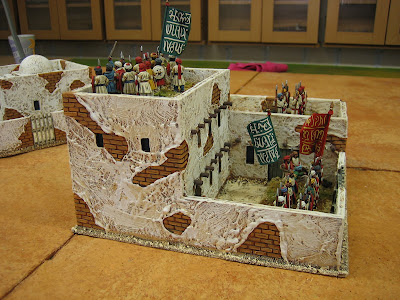 Two storey building with long one storey warehouse attached. This will give a 'multiple module village' a bit of height.
Note the small high windows on the outer face of the compound. Windows low down would defeat the compound's purpose. 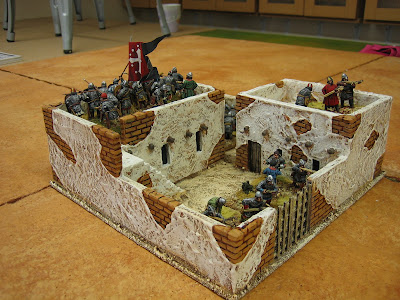 Two small, single storey, buildings sharing a compound.
I might make another similar to this. As a design, it came out much better than expected. The narrow gap, between the buildings, leading to a smaller courtyard beyond, was important for its success, I think. 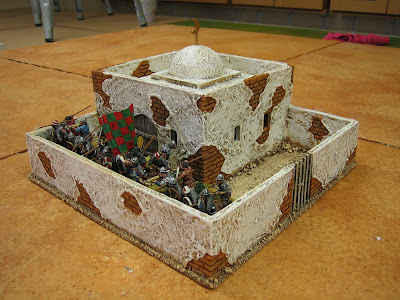 A mosque.
Domes are a bind because they preclude putting troops on the roof and spoil any chance of two unit per box occupancy... 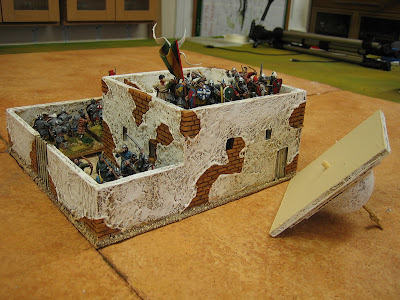 ...but wait!
I actually managed to think about this before gluing the dome structure in place: the dome lifts off when required.
I very nearly glued it on. Phew!
The roof has a hole in the centre and the dome has a plastic locator pin. these centre everything when it's put together. Troops on the roof cover the hole.
Will I make more? Yes, four, I think. Three will be made with a single building on one edged and a road on the other (the road being the position of the second 'occupying' unit) so that I can have a road going through two module villages. I'm still at the design stage for these - getting these to look good is actually harder that it seems; one will be a row of shops with a cloistered front.
On the rules front. TtS rules for 'village boxes' are not quite right, IMHO. So, I'm tweaking again.
at December 04, 2020 10 comments:

Following the lengthy reply I made in comments relating the last Crusades post, I thought it might be useful if I posted these. They are the army lists and quick reference sheets that I'll use here for TtS Crusades games. They have all of the house rule amendments included (at least I'm pretty sure they do), and the sheets over ride the rules as originally published.

Obviously, the lists reflect what's in my collection. The rule changes have been made purely to add an extra layer of depth to give my Crusades games more period characterisation - this is especially the case when it comes to missile weapon technology.

I've added a new formation called whirling mass specifically to reflect the tactics of Turcoman horse archers. Unlike settled Seljuk Turks and Arab troops, who used shower shooting whilst stationary, Turcomans were constantly on the move when shooting. Turcomans used, what I can only describe simply as, 'shooting by tribal caracole': That is sweeping in in large groups, before shooting, then retiring, the process constantly being repeated by more groups behind. This whirling, dust raising multi-unit tactic is a difficult thing to model, so I've come up with whirling mass. (see notes under Turcomans in the lists below).

I've also added a couple of simple rule changes for impetuous troops who often charged without orders, and made a simple change to the way artillery works.

Possibly the most radical change I've made is to dispense with ammunition chits altogether because so much in the Crusades shoots; having stacks of chits everywhere isn't great; I frequently forget to expend them on shooting (or worse put them into the replenishment stack); it is a needless complication that slows the game down. Units do still go out of ammunition (and such units are marked with a counter) but, they do so following activation to shoot, on drawing a 1 (ace) chit when determining if there is a hit or not (javelins are treated slightly differently - see QRF). Ammunition is replenished in the usual way except that on a single replenishment the unit counts as 'loaded' until it draws a 1 (ace) chit again. I do something similar for lances. I do not have separate lance and ammunition chits, they amount to the same thing and have been termed 'replenishment chits'.

I'll stick my neck out here and say that Simon M. will not mind me publishing this as I think the official TtS army lists and QRF are free to download from his site, and he's quite open to new ideas. He calls his amendments TtS Even Stronger; I call my amendments TtS Even Longer.

EDIT: Since originally posting I have edited the tables and reposted them here. Some people are not getting the tables in the right format. If you are experiencing difficulties, drop me an email (see my contact details in the sidebar), and I'll send you the original MS Word doc.