Crusades Campaign - The Isle of Fob

Peter J and I are about to start a fictional Crusades Campaign. We will be using Ager Sanguinis Rules to fight the table-top encounters, and an Ager Sanguinis / Theatre of War (Piquet) hybrid set of rules for the map moves etc. The hybrid campaign rules are currently available from the files section of the following Yahoo Groups under the title 'Isle of Fob Campaign'; as are Ager Sanguinis Rules for early Crusader warfare:

The photos are from a recent (not campaign related) game, hurriedly thrown together, that Peter and I fought out (Crusader victory) a week or two ago. 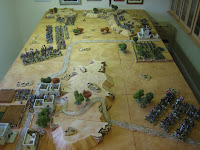 Background:
From the Chronicles of Kermit the Hermit........

….In the summer, in the year of our Lord 1110, sore pressed by incursions on his northern borders by Asiatic hordes, the Emperor [Byzantine] withdrew armies and garrisons from quieter parts of the Empire to meet the threat. This was folly for, in leaving the Isle of Fob unprotected, he invited the attention of divers Seljuk princes. 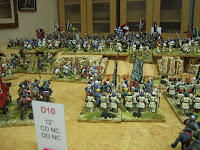 The Isle of Fob is not, in truth, an isle. It is a large tract of land connected to the mainland by an isthmus that borders the lands of the Hashishmendid Seljuks. No sooner had the garrisons left the Isle the Seljuks, led by a certain Emir called Gudrupee, crossed the isthmus and occupied Chiosus. It was late in the year and here Gudrupee encamped for the winter and declared himself Malik of Fob. On promises of land, wealth and the Glory of Allah his army was swollen by reinforcements in readiness for the campaigning season. 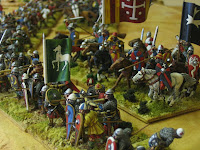 Fearing for his cherished Isle the Emperor was at a loss, for in sending troops there he must give up another cherished part. Then fortuitous help came to him. A Crusade, led by Louis of Chernobil, was on its way to Jerusalem and was at that very moment passing through the western borders of his lands. 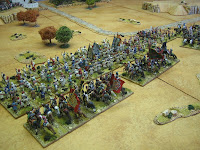 It has long been known that the Isle of Fob is a blessed place; for it was to here that our Lord’s Cup was taken and hid in one of the many monasteries. The Emperor, being both wise and cunning, let it be known throughout Christendom that this Blessed Relic would surely fall into the hands of the heathen if left unchecked.

But now the Emperor’s plans became untied. Betraying the Emperor, the Crusaders crowned Chernobil King of Fob and set to plan conquest of the Isle for themselves.

Thus the scene was set for the bloody War of Fob……… 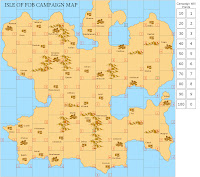 The Ilkley Lads and I will also be at the York show on 7th Feb 2010 - doing a Crusades game. Drop by and say hello.

Email ThisBlogThis!Share to TwitterShare to FacebookShare to Pinterest
Labels: Crusades Project, The Chronicles of Kermit the Hermit

It has been some time since my last post. This isbecause I've been snowed under with painting commissions and Christmas. But I have found time to keep my Punic Wars project more or less on schedule.
Here are the latest additions. 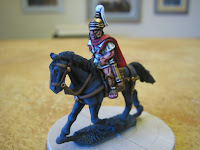 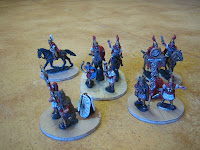 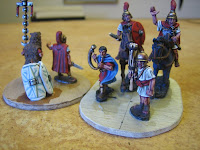 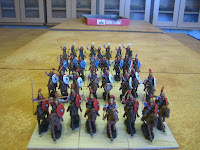 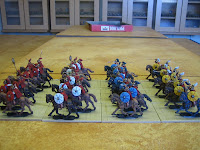 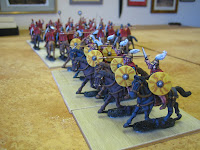 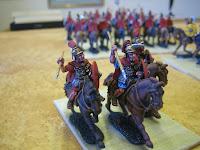 4 units of Roman and Allied cavalry. This completes a very small fraction over half of the Roman army. 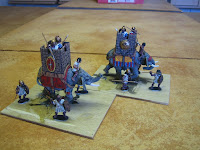 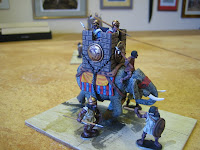 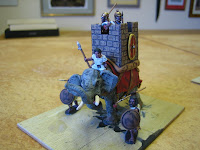 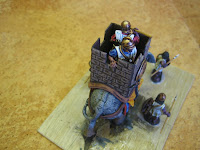 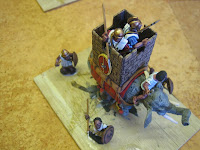 Now the schedule is getting interesting. Elephants - the first 2 of 8. 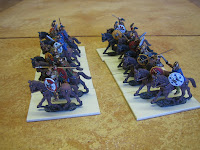 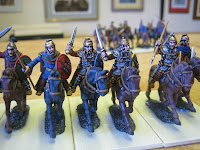 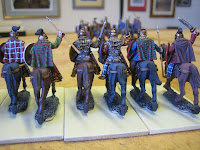 The first units of Gauls. Two units of cavalry. (2 of 10). I don't like these figures much (I've removed a lot of swords and replaced them with spears - I've removed even more from the batch in progress) but they paint up well. 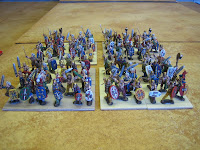 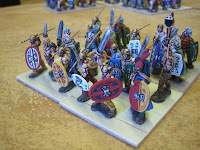 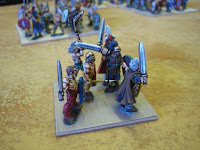 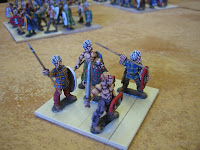 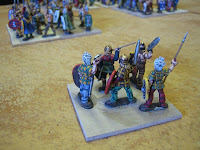 Lastly, 4 Celtic war bands. These castings make up for the cavalry and some. They are fantastically easy to paint. The 'square' nature of the torsos on clothed figures makes check patterns a doddle! This makes me very happy as I've got another 14 to do. I also decided to cheat on the basing. Instead of 24 figs per unit, I'm going to do them at 22 because it actually makes them look more 'irregular'; it also makes 2 extra 'free' units.
Next up, some more Gallic cavalry and Spanish infantry.
at January 29, 2010 10 comments: