Some terrain I made for X-Wing games

I've been so busy with one thing and another over the past six weeks or so that I haven't played a game or painted a single figure for myself; I haven't written a blog post either; rumours of my demise are premature.

However, I've got a few hours this afternoon, so to prove signs of life I thought I'd show you some things I made in January following a Christmas splurge on X-Wing.

It's not to everyone's taste but, it's something. 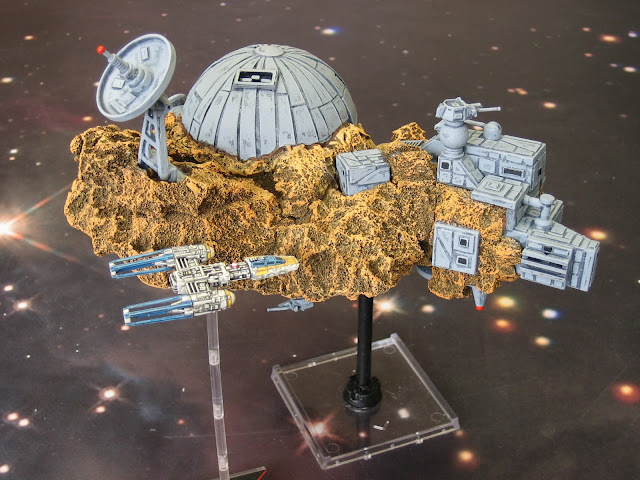 I don't get to play X-Wing very often but I like collecting the models ever so much. As the new ready to go models arrive I always get the urge to have some input of my own into what is a 'complete game' that needs no input: It's the megalomaniac in me.

In January I decided to add some more pieces of 'terrain' to the asteroids and satellites that I have already made. First, I wanted a large military base to use as a mission objective - in effect, something to bomb. 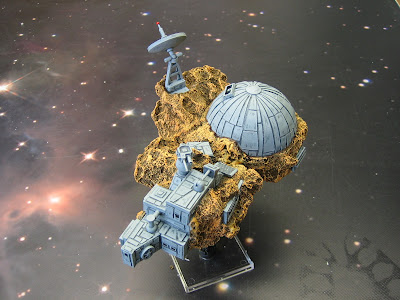 I decided on a 'deep space communication / intelligence gathering station' built on a large asteroid.

As per my smaller asteroids I used man made sponge to make the 'rock'. This was torn and pinched to make a rough surface except for a few flat patches for the 'man made structures'.

These structures were shaped around half a polystyrene ball, several pieces of Lego (some from Star Wars kits, including the dishes), and a couple of 15mm Marmon Herrington armoured car turrets stuck to wood beads (making ball mounted heavy laser cannon capable of very wide arcs of fire). 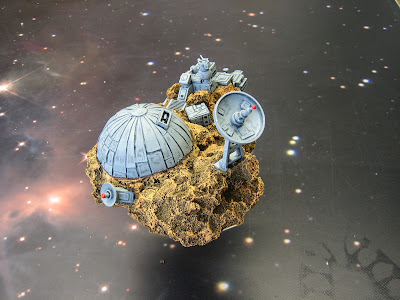 The structures were enhanced with plastic card panelling before the whole lot was painted in household emulsion paint.

When painting the first undercoat onto the sponge (I used white paint for this) I watered down the paint with 1 part water to 2 parts paint so that it soaked deep into the sponge. When this is dry, especially after the finishing coats, the sponge is no longer spongy, it drys into a hard, light, solid mass. 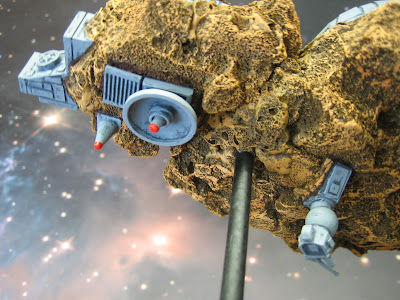 When the first coat of paint was dry I went around some of the edges of the structures (such as the dome) with Gorilla Glue with some water stirred in so that it frothed whilst curing to make it look like the structures were coming out of the 'rock' rather than simply perched on the top.

The glue drys with a smooth surface but, if you cut the 'skin' off with a scalpel blade it looks rather like the surrounding sponge.

At this stage I sliced into the bottom of the the sponge (in a star pattern), at it's centre of balance where the 'peg' would fit, and filled the slices with Gorrilla Glue and stuck the peg (a piece of plastic tube) into place. The glue has set as a solid lump and is very stable.

Then I painted everything with various emulsion paints (match pots / colour test pots) to finish it off. I used a dark brown, bright sand colour and various greys. The red bits are luminous orange enamel.


To make an X-Wing style token for it to stand on, and define it's exact shape and location in game terms, I photographed the finished model. I printed it off onto a sheet of sticky backed label paper, stuck it to a piece of thick card (the back of a sketching pad), cut it out, painted around the picture with black paint and finally covered it with clear sticky backed plastic.

I've scanned the finished token and I give my permission for you to print it off for your personal use if it will be of use to you. I've added a line so that it can be played in a similar manner to a huge ship; I'm still to do a special 'huge ship damage deck' for it. 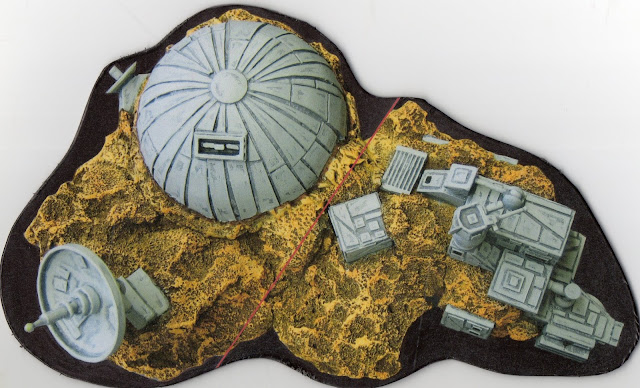 I had a spare large ship base (I got it with a TIE Reaper) so I used that for the base. I stuck the plastic peg into it using Gorilla Glue and it's absolutely solid!

The whole as it will be played. 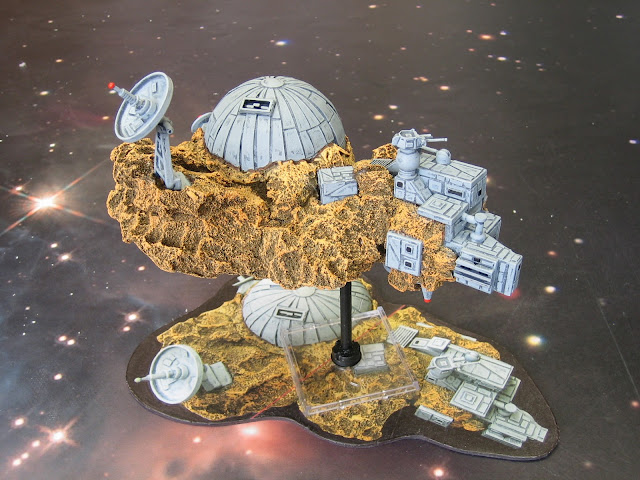 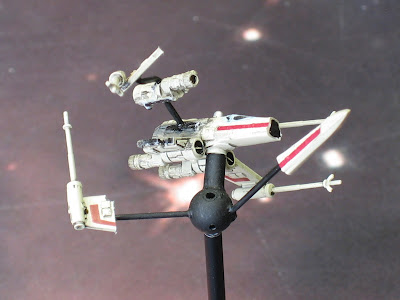 I also decided to make several pieces of space junk.

I bought two ship and stand only lots (no cards or tokens) from ebay to make a couple of destroyed ships, the 'exploded' parts held in place with steel pins. The centre ball is a wood bead with a peg. The peg slots into the stand peg - so that the stand can be used for different things - and it is free to rotate. 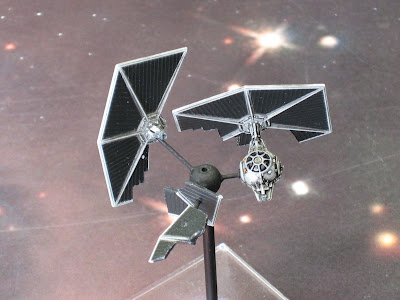 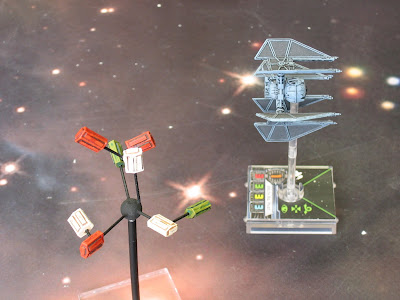 I made some spilled containers (inspired by the C-ROC Cruiser) using the same bead and pin arrangement.

The containers are two pieces of sprue from a model kit, stuck together back to back (making containers with a flat hexagonal section), with a some plastic card panelling. 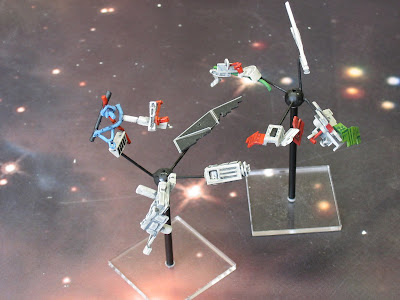 More space junk was make from some bits and pieces from the model of a HO scale Quad 20mm AA gun kit, suitably chopped up (plus a bit of TIE Fighter).

I also used this modelling occasion to change the bases of all of my junk and asteroid stands by buying some 3 mm thick, 40 mm squares of clear Perspex (acrylic) so that you can see the appropriate game token beneath (tokens not shown here). The pegs are 3 mm aluminium tubing. Each complete base cost £1. 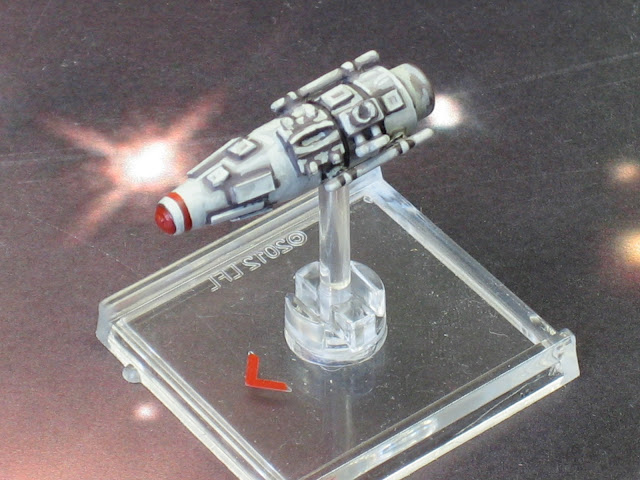 Finally, I made an escape pod. I saw one on Lead Adventure Forum and pinched the idea. It's various bits of an old ball point pen with some bits of plastic (some of the Quad 20 mm again) and plastic card panelling glued on. I based it on one of the flight stands that came with one of the ships I made into junk.