A Light Snack: My Light Division for the Peninsular

In preparation for my first post lockdowns face to face game next week, I've made a push on finishing what's left of my British lead pile. I still have ten units and a clutch of command stands to paint (after the stuff shown in this post) but, I've recently done the hard part: Namely, my version of the Light Division.

It is, without doubt, the prospect of painting this division that has put me off getting the British finished. Commercially, I paint a lot of riflemen and, along with Cacadores, I don't ever enjoy doing them: Painting the dark shades of black equipment on dark green and brown clothing is always hard on the eyes; doing them two or three times is fair enough but, I've painted tens of units of them over the years and now my heart sinks at the prospect.

Anyway, I bit the bullet and eight days later the pain was over. My Light Division is done and ready for service. Huzzah! 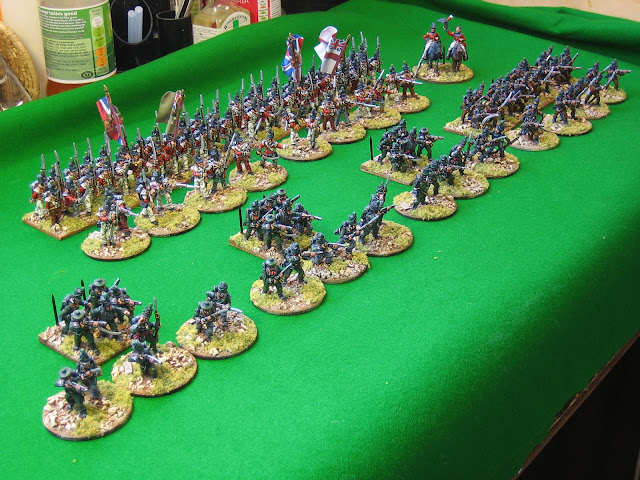 I don't represent command elements below division, so I don't bother with 'brigade structures' and, although this is a somewhat heretical approach, it makes life very simple because I have some discretion to paint the units with most interesting facings, flags, etc. 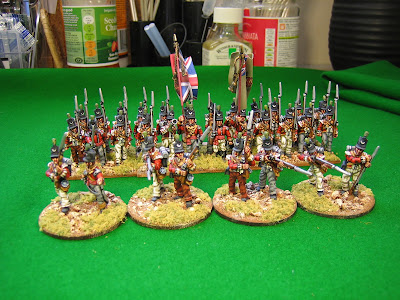 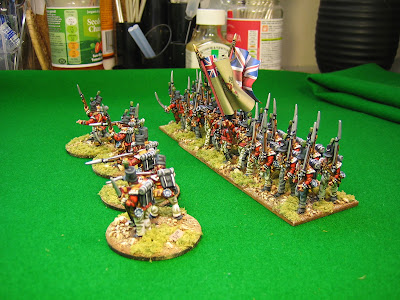 Buff facings means buff accoutrements. I can never decide if I like it or not but, it makes a change from from everything white.
Figures are Front Rank.
Flags are Flags for the Lads. 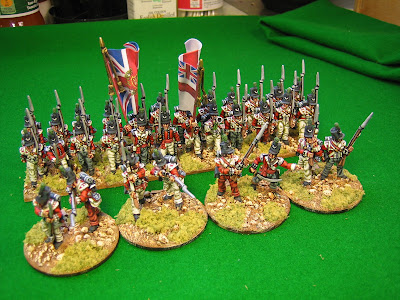 43rd Foot, Monmouthshire Light Infantry.
White facings and a regimental flag with the Cross of St. George makes this a nice bright unit. 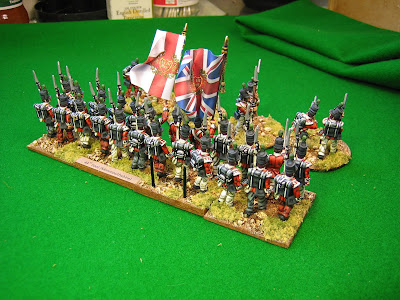 Figures are Front Rank.
Flags are Flags for the Lads. 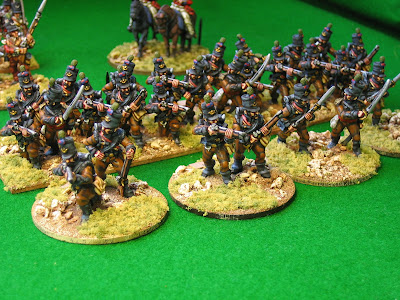 3rd Cacadores.
Two battalions were fielded in the Light Division (1st and 3rd Cacadores) but both were usually well understrength. My scaling means they are represented by a single battalion. 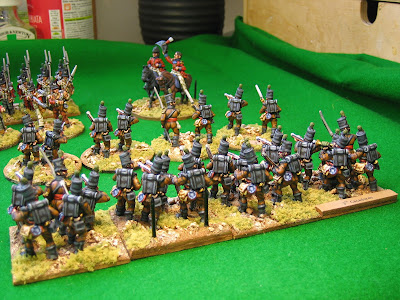 Figures are Front Rank.
Note that Front Rank don't make Cacadores armed with muskets and consequently this unit is a 100% rifle armed fudge. It's a fudge I can live with. N.B. The unit, under my definition, counts as equipped with muskets, not rifles.
Note that the unit only has 5 figures on each close order stand: I found 6 to a stand  looked very overcrowded (see 95th below). 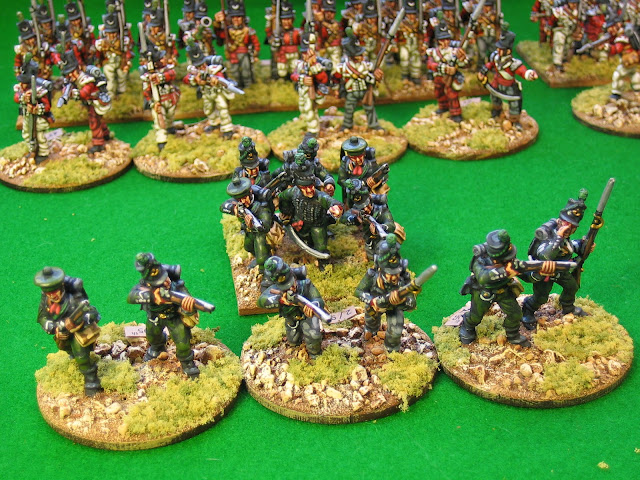 95th Rifles (x3 skirmish units)
The 95th Rifles, as is their way, cause a bit of a problem because they shouldn't fight as a formed unit. Even within the division, half of 1/95th fought with one brigade and the rest with the other. 1/95th didn't even combine when a third half battalion was added later in the war. Consequently, I decided to paint and base them as three small skirmish units proper.
Note that this close order stand has six figures and looks overcrowded (see comment above). The other two units have five to a stand, and I used the two extra figures to make a single skirmish stand to add to the skirmish potential in another division. These units were painted as a single batch before the Cacadores. 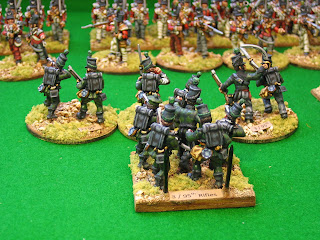 Each unit has three skirmish stands and one close order stand. The latter is used to determine facing, measure ranges and, in the face of cavalry (with skirmish stands removed), represent the unit 'clumped'.
Up until 1813, the Light Division will only field two Rifle units.
Close order stand with five figures, which looks like much better spacing IMHO.
Figures are Front Rank. 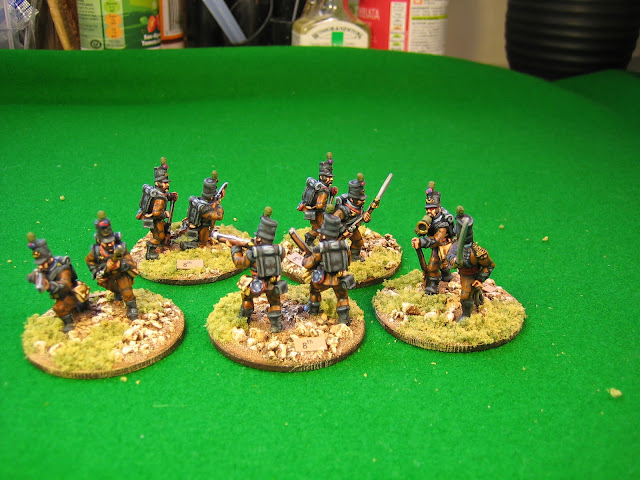 Lastly, and not as part of the Light Division, when I painted 3rd Cacadores I chucked in a few extra stands of 8th Cacadores to bolster the skirmish potential of an infantry division (8th Cacadores fought with 5th Division).
With my scaling method Cacadore battalions are too small to be generally represented (typically only around 400 - 600 strong). With this in mind, I thought it would be best to fudge Cacadore battalions and just field the occasional one. On reflection, this was muddle headed. Outside of the Light Division, which will field a full battalion, Cacadores will be fielded as skirmish stands only, one being attached to each line unit in the division to bolster its integral skirmish factor from 2 to 3.
It's such a simple concept I can't understand why it didn't occur to me as the simplest way to represent their presence within a division in the first place. That is why I've painted five stands of them - most Anglo Portuguese divisions were 5000 strong (5 units) so five stands are required.
Note: Some divisions did not have a Cacadore battalion. These will get one stand of 95th Riflemen / 60th Riflemen / Oels Jagers (for each company attached) with which to bolster the SK factor of one or two units therein. Where both Cacadores and rifle companies are present, the riflemen will be ignored - line battalions with a SK factor of 4 would be over egging the pudding.
Anyway, next up, another generic 5000 strong Anglo Portuguese infantry division.