Those who follow this blog will know that my expanded SYW collection is largely down to committing to doing a demo game of Zorndorf 1758 at Triples in 2014. Game aside, that show did not go well (the worst experience I've ever had at a wargame show) and the thought of doing Zorndorf again at another show has been a hurdle that I've not been able to jump - even though I had originally planned to 'tour' the game for a year or so.

However, wounds heal and I've decided that my Zorndorf game will be at Fiasco 2017 this Sunday.

Here are some shots of the game I took today prior to packing it all up for the show. The playing space is 14 x 6; there are in excess of 1500 figures (including some new wagons from War Bases - see next post). 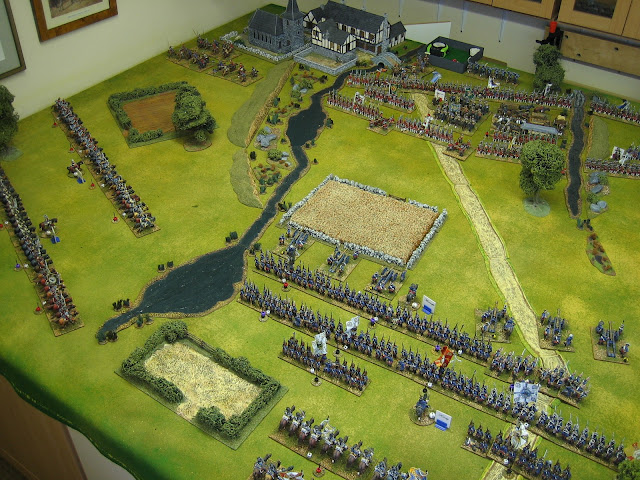 Anyone wishing to join in this game for a few turns (or the day) need only ask. There are only three Lads doing the game this weekend, so a few more people to actually play the game would be welcome. As with the Cerignola game last month, places are limited and the game is not child friendly (sorry about the latter but, it's not a 'true participation game' - we leave that for others). 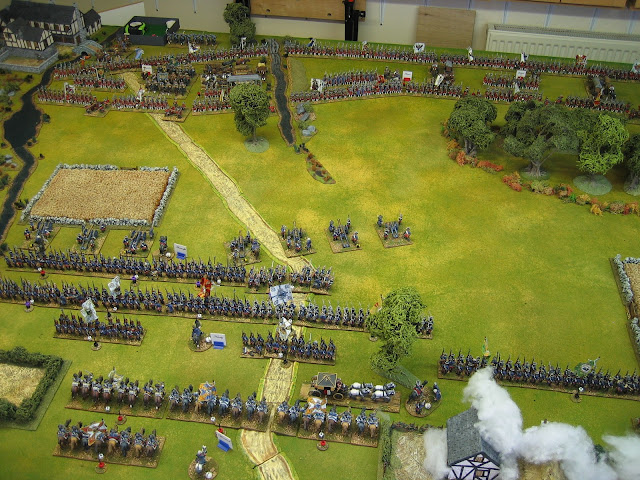 The rules will be Warlord's Black Powder with some fairly simple house amendments. If you want to play, my address is in the side bar - book a place. 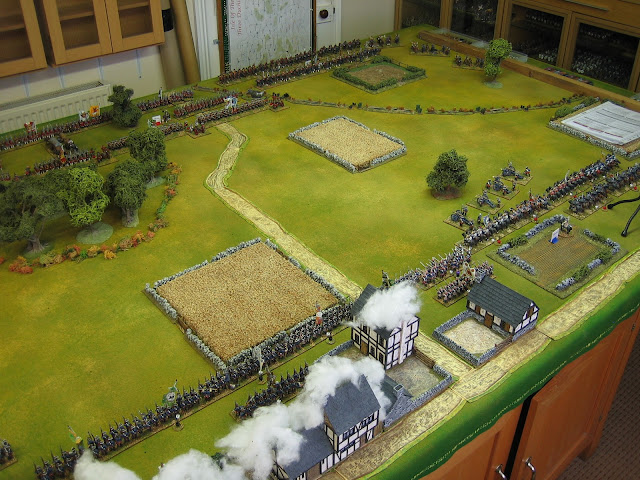 Derby Worlds - Thanks to everyone who stopped by for a chat.

I counted them all out, and I counted them all back. All of the Italian Wars figures and terrain pieces are back in their cabinets and I'm glad to report that they all made the trip to Derby Worlds and back safely.

I'd just like to say thank you, on behalf of the Ilkley Lads, to everyone who stopped by the Cerignola game. We had a thoroughly enjoyable time at the show (despite the somewhat cramped conditions imposed by the smaller new venue) and everyone seemed extremely chatty and friendly this year - I can't remember a game or set up that generated as much interest or as many questions.

The games, one played on each day, were both played to a satisfactory conclusion: the results came as a complete shocker: the French won both! The first day's result was down to a powder explosion happening on the first turn of the game when the gun in front of d'Ars exploded and d'Ars' cavalry successfully charged the ditch in the French phase of the same turn - it was a case of 'a perfect storm'.


The second game was contested rather more closely, with both sides tiring, but the Spanish were eventually forced to throw in the towel when the Landsknechts collapsed. As a re-fight of Cerignola it wasn't that historical, partly due to the downgraded definition of the ditch and earthwork, but as a game it was highly entertaining.


Anyone wishing a for a more historical scenario result should count the earthwork as a strong fortification that affords a +2 morale save bonus and a +2 melee result bonus for defending a fortification. However, for a game that keeps the French player interested I would keep everything as it is here.

This weekend The Ilkley Lads will present Cerignola 1503 as a demonstration game. On the Derby Worlds site it says that this will be a participation game but, this is a misprint, it's actually demo game. However, if one or two people want to pitch in for a few moves to try the rules, or simply to roll a dice or two, we are normally happy to oblige - with one caveat, due to the nature of the game and the figure collection is not really suitable for children (sorry).


As with all games put on by The Ilkley Lads, we will not have handouts. We will have an account of the battle and the OOB that can be read at table-side and blog address slips to so that people can find the same material published here if they want to use it in the future.

We have put on a Cerignola game at a show before and much of the material that follows is a rehash of previous posts. However, this time we will use Pike and Shotte rules by Warlord to re-fight the battle. Consequently, the order of battle and scenario have been tailored to suit P&S and new figures have allowed more and bigger units to be used.

The Battle of Cerignola 1503

In 1500 Louis XII determined that he would re-conquer the Kingdom of Naples for France. In June 1501 his army, under the command of Louis d’Armagnac Duc de Nemours, began to mass in Rome in readiness for the invasion. King Federigo of Naples anxiously watched the French preparations and frantically tried to raise an army of defence; his one consolation was that several thousand Spanish troops under the command of his friend Gonsalvo de Cordoba had crossed the Straits of Messina to land in the south of his Kingdom. It seemed as though Federigo’s uncle, King Ferdinand of Spain, was coming to his rescue.

Just before the French army departed south Pope Alexander VI disclosed the secret Treaty of Granada signed on 11th November 1500. By the provisions of the treaty King Federigo would be forced to abdicate and his kingdom would be divided. King Louis XII of France would become King of Naples and take control of Naples, Terra di Lavoro and Abruzzi. King Ferdinand of Spain would take the title Duke of Calabria and control of Calabria and Apulia. Federigo had been stitched up by his own family.

By the spring of 1502 it was all over for the old regime. The Kingdom had been occupied and divided by the armies of France and Spain. But not everything was settled. Two important regions in the Kingdom, Capitanata and Basilicata, were not mentioned in the treaty and both France and Spain laid claim to them. By the summer of 1502 what had started as angry skirmishes between French and Spanish outposts in the contested provinces had escalated into open hostilities.

The Spanish army was heavily outnumbered by the French. Fearing that he would be overrun Gonsalvo ordered most of his troops to concentrate at, and fortify, the port of Barletta on the coast of Apulia. There he would await reinforcements and events. Nemours moved the French army to blockade Barletta. Gonsalvo wisely refused to give battle and Nemours secured most of the rest of Apulia for France.

Gonsalvo’s situation in Apulia began to change from the autumn of 1502. Nemours divided his army and sent a strong force to occupy Calabria; Nemours lifted the blockade of Barletta to put his army into winter quarters; Gonsalvo was reinforced - including a contingent of seven regiments of veteran landsknecht pikemen; in late February 1503, Gonsalvo led a sortie out of Barletta and took the town of Ruvo, capturing the French captain La Palisse, 150 gendarmes and 800 infantry. The scales were in balance (both sides were now equal in number with about 8,000 men each). Gonsalvo decided that the time had come to seek a battle with Nemours. On 27th April 1503 Gonsalvo marched his army out of Barletta and Nemours moved to confront him.

The Spanish army arrived at the hill top town of Cerignola on 28th April. It was a swelteringly hot day but, rather than rest his men after their hard and dusty march, he set them to deepening and widening a wet ditch at the foot of Cerignola’s vine clad slopes. The spoil, held together with stakes and vines grubbed up from the hill side above, were piled into a low rampart. This rampart, lined end to end with thousands of arquebusier (early musketeers) would decide the battle to come.

The French were marching to Cerignola, strung out along the road, advancing without reconnaissance, and harassed by Spanish light cavalry. It was very late in the day when they finally arrived before Cerignola. On seeing the Spanish army below the town the French held a council of war to determine their next move.


The Duc de Nemours favoured waiting until morning before attacking. This would allow his artillery (struggling up the road some distance to the rear) to come up, and his tired infantry (some of whom had suffered heat stroke) to rest after their long, hot march. Many of Nemours’ captains disagreed. Even though the army had not yet fully come up Yves d’Alégre, amongst others, urged an immediate attack. Surely, they said, one violent attack with a combination of the Swiss and Gendarmes that were present would decide the battle – as they always had – and afterwards they could all sleep, victorious, in comfortable beds in the town. The council became argumentative and Nemours was forced to bow to his officer’s wishes. No one in the French army had seen the deepened ditch and rampart.

The French hastily formed up in echelon from the right. Nemours ordered the trumpets to sound the attack. The French line moved forward under fire from Spanish arquebusier and artillery. A light wind blew the powder smoke towards the French and that, with the clouds of dust kicked up by the horse’s hooves, blinded them to the danger of the ditch until they were upon it. The French were brought to an abrupt halt at the edge of the unexpected obstacle and subjected to a murderous fire. It was several minutes before the French crossed the ditch and came to close quarters with its defenders on the other side.

Suddenly, there was a moment of panic in the Spanish ranks as a powder magazine blew up inside the entrenchment. Gonsalvo, seeing his troops flinch, rode up in person to restore their courage. All along the ditch the French tried to break through the Spaniard’s defensive line. Attempt after attempt was made in vain. Crashing volleys of Spanish arquebus fire poured into them and soon the French were knee deep in mud, and the blood of their piling dead.

As the sun began to set the Duc de Nemours, riding along the line shouting words of encouragement to his men, was shot by an anonymous arquebusier. Then Chandieu crossed the ditch in an attempt to find a gap. He was immediately identified by his white plumes and fell, armour sieved, in a hail of shot. Darkness fell and the leaderless French began to falter.

Gonsalvo ordered a general advance. His infantry leaped across their breastwork crying out “Castile, Aragon, Santiago!” His cavalry crossed the ditch and wheeled in on the French flanks. The French broke. The slaughter was terrible. Only the darkness saved them from being completely massacred. The battle had lasted little more than an hour but, in that time, more than 4000 French soldiers had been slain. The Spanish had lost less than 100 men.

For the first time in history, an army comprising the best troops in Europe had been defeated by a thin line of ragged soldiers wielding short lengths of iron tube loaded with gun powder and lead pellets. Warfare was changing……….

There are only three significant pieces of terrain.
Command Ratings
Blunder Rolls
Turn 1 & Other Timings.
at October 03, 2017 12 comments: