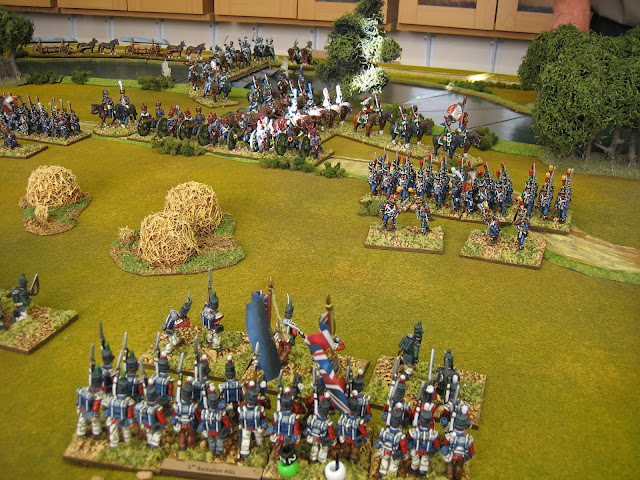 Last night Peter J. and I played our first game using Lasalle rules by Sam Mustafa. The scenario set up can be found here: The Bridges at Taco Reir

The first thing to say, as when playing most rules for the first time, is that we played several things slightly wrong. Most especially, I forgot that the recovery test often requires the rolling of more than one dice - so things recovered far too easily. 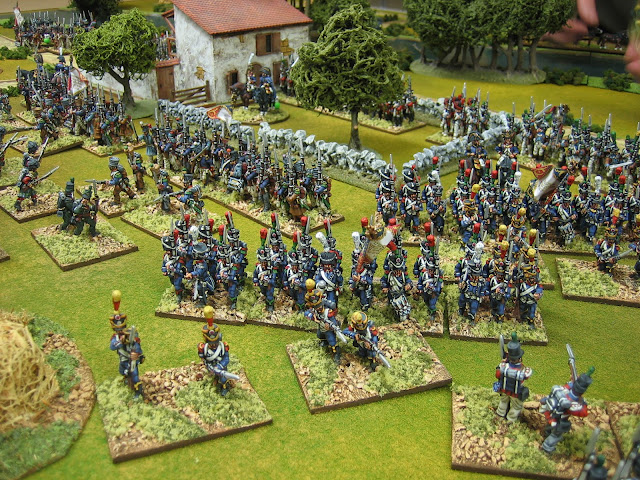 The British were breaking the French left and pressing towards the pontoon bridge and the French had broken through the British centre and were mounting the high ground.

According to the rules we were about to run out of time; at best guess we played 18 player turns (9 each) - so the game could be called a draw. The 'lack of result' was largely down to advancing in line rather than column - a habit picked up from playing rules with much greater move and shooting distances - which meant several 'wasted' early turns. 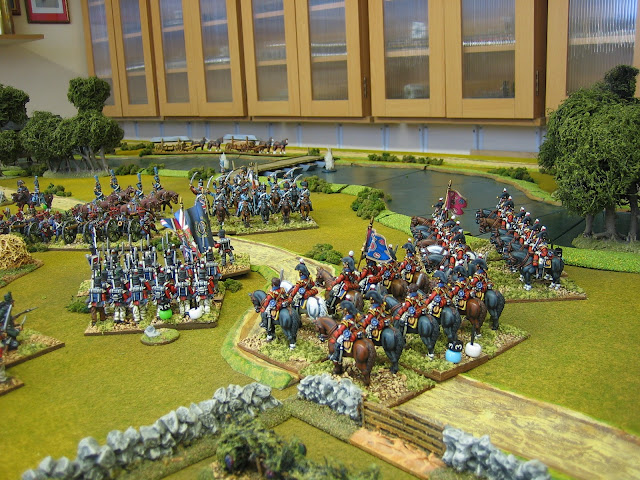 Good things about the rules:

Lasalle has a superb, very clever upside down move sequence that we liked very much. It allowed for much cut and thrust whilst keeping everything 'clean'. By that I mean that despite the confused look of the battlefield the game wasn't confusing at all. The move sequence is the basic mechanism that runs this game and it is excellent.

We liked several clear cut rulings - like not being able to shoot if there are any friendly troops in your fire zone closer than the enemy (straight ahead, width of unit, out to 8" for musketry, and about 40" for artillery roundshot). I just need to make a few beaten zone templates.

The factors for shooting and melee are kept to an absolute minimum. Indeed, there are astonishingly few. There are quick reference sheets but I can see these becoming almost redundant after a few games because there is so little 'detail' to remember.

The complexity in the game comes from what I might call 'situation rules' which are well explained in the main rule book. There are a fair few of these. Fortunately, they are mostly intuitive; I'm sure these to will be remembered and become second nature after a few games.

The move rates and shooting ranges are also excellent. They are just what I was looking for. This is because the game was developed to fight battles on 6' x 4' tables. Now, my table is much bigger than that, and this means I have plenty of room, especially in depth, to deploy reserves at some distance from the enemy - going forward, for Napoleonic games, this will be a very useful aspect of Lasalle. Thinking back on it, wanting a bigger table had nothing to do with shooting further or moving faster, rather it was all to do with table depth for initial deployment areas and table length for flank room - how soon we forget.

How much any set of rules provides for 'period feel' is, in my opinion, a mute point. In my experience, period feel usually comes from the period knowledge, and the attitude to game play, of the players playing the game, not the rules sending players back in time. That said, I think Lasalle, played in the right spirit, is as good as anything I've played and better than some. 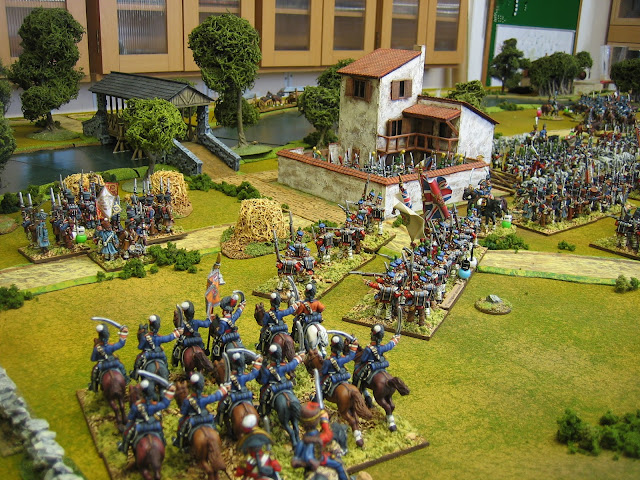 I wonder if Sam Mustapha has an artillery fixation. According to my research, artillery occupied a frontage of about 10 yards per piece. For a French battery this equates to roughly a third of the frontage of a typical battalion in line. With my basing, this means a single gun per battery. I don't like single gun batteries so I fudged my collection and settled on two gun batteries. Big Sam has four model gun French batteries (representing 8 guns) with the same frontage as a battalion and this is simply too big, IMHO. I'm going to use two gun batteries with Lasalle (and be damned) and just have them roll for the rule prescribed number of guns; as guns never lose 'bases' this should work just fine. He also puts a battery with every six units or so - which also seems rather populace to me. My thoughts on Lasalle's artillery rules are a quibble, not a deal breaker. I'm fairly sure my house rule will not affect game play very much at all - we'll see.

On first play, we found the commander 'tactics' factor in melee too powerful. We can see the logic behind the mechanism - it is an abstract way of exerting commander influence at the schwerpunkt - but, it does seem to swing a combat in a very draconian way. We'll persist with it for now, one game probably isn't enough to judge the 'probabilities'.

Walls. Why does it take a whole move to get over a wall? Again, this is probably just me. Perhaps I'm too used to having them on the table in the first place - especially as I often use them to bound and distinguish areas of rough terrain. Thinking about it, the rule makes good sense for game play - the unit is over the wall or not. So this is even less of a quibble than the artillery thing - but, to be 'BBC balanced', I can't be wholly positive about anything! 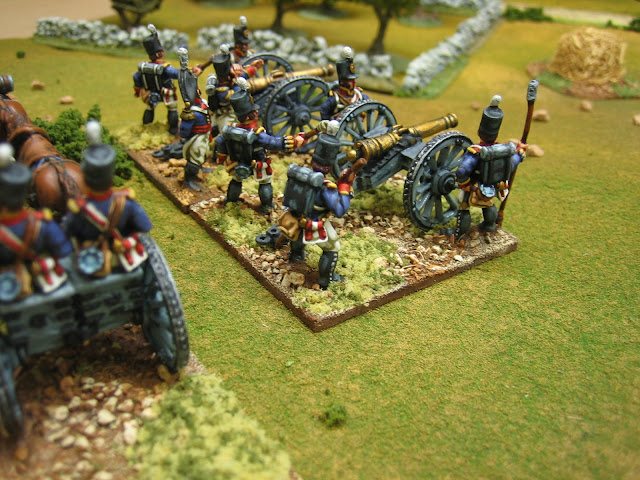 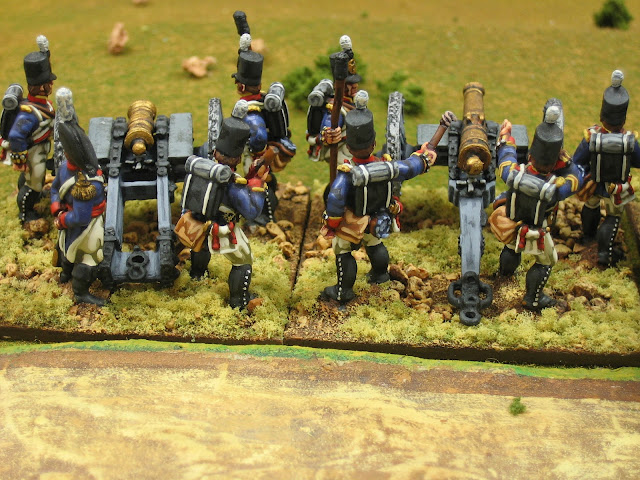 So, not bad then. At the end of our first night's play our opinion of Lasalle was very positive. These rules have a lot of merit. We're looking forward to giving them another bash next week.
at July 04, 2019 10 comments:

It's that time of year again. The League of Gentlemen Wargamers meet three times a year to play a two day game. It's the only time I get to play in a serious multi-player game (typically 12 - 15 players plus an umpire) and I can't tell you, given the game length, what a difference that dynamic makes. This game was organised by Dale S. and his organisation and umpiring was, to say the least, very clever.

This was not the only big Napoleonic game going on in Scotland this particular weekend. In Glasgow a hundred player 22,000 figure Waterloo game was being played to break a world record. We only managed 12 players with 12,000 figures (apparently). I provided only 300 French infantry, but I was on the train.

I'm not going to tell you that I won the day on this occasion, as my table fellow Corps commander was the ever lucky Charlie Grant. We broke the allied left and swept round behind their centre. We did it with gusto and a fair amount of bluster - much to the chagrin of my host Steve R. who was kind enough to put me up again. It says a lot when you can kick the living whatever out of a man on one day and see him cooking you bacon for breakfast the next!

Anyway, the original game frontage was 48 feet (three 16 x 6 tables), with a reserve 16 foot table (which, guess who got to fight on) used to represent the allied centre rear. So, without much explanation, the pics. 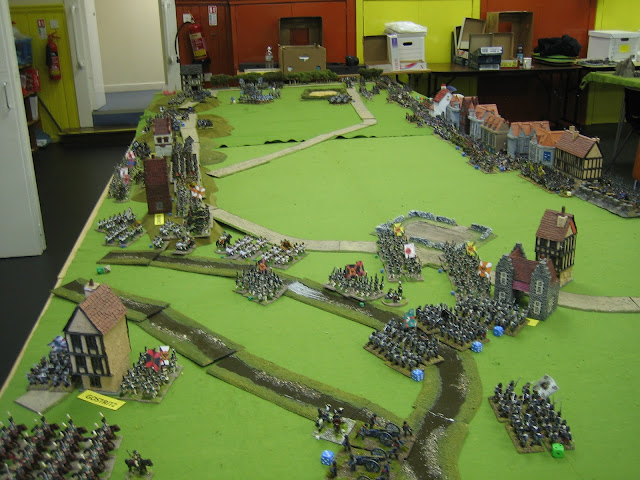 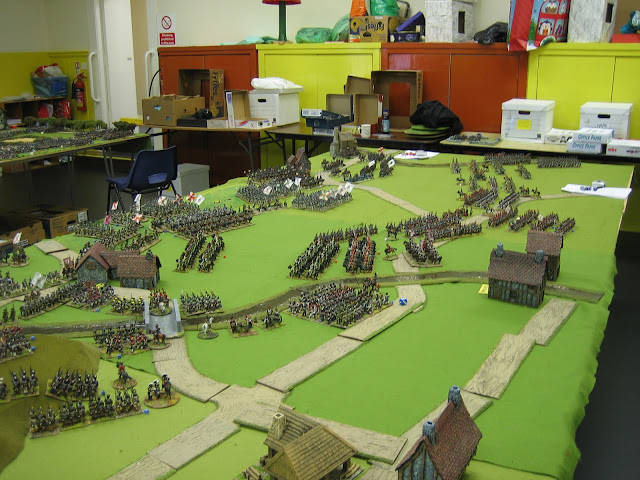 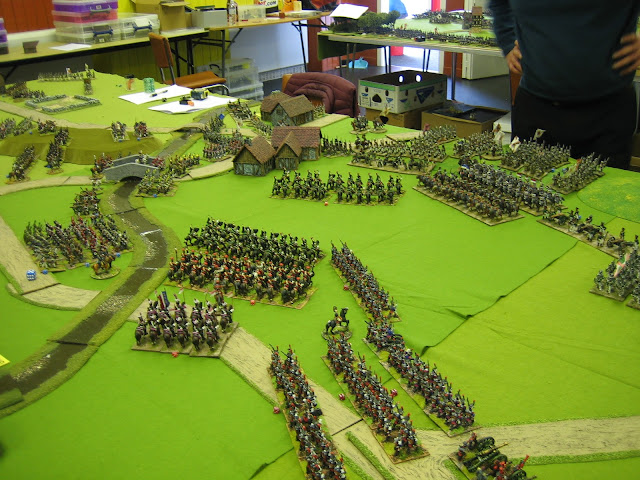 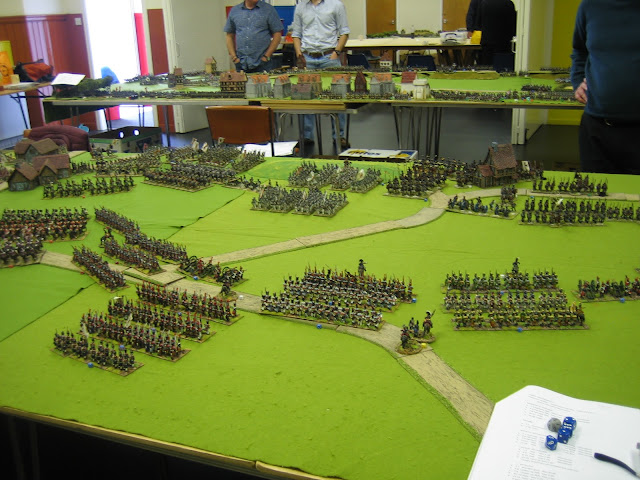 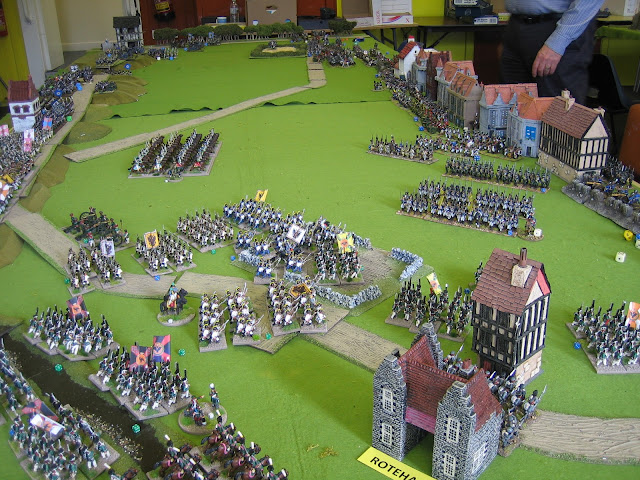 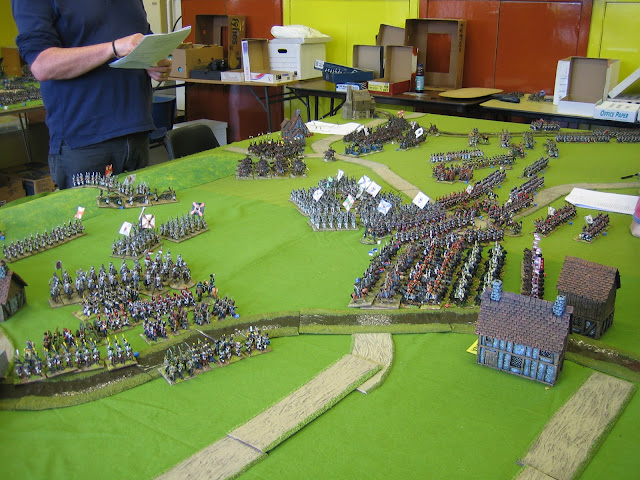 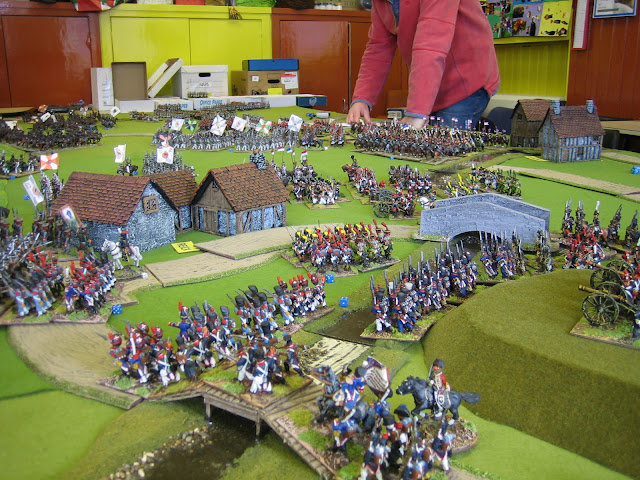 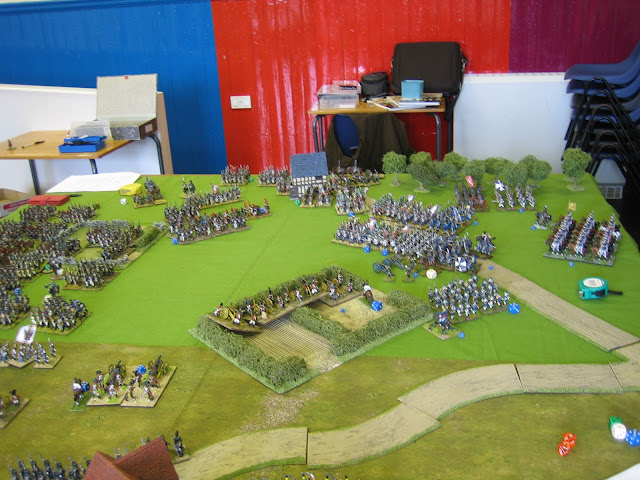 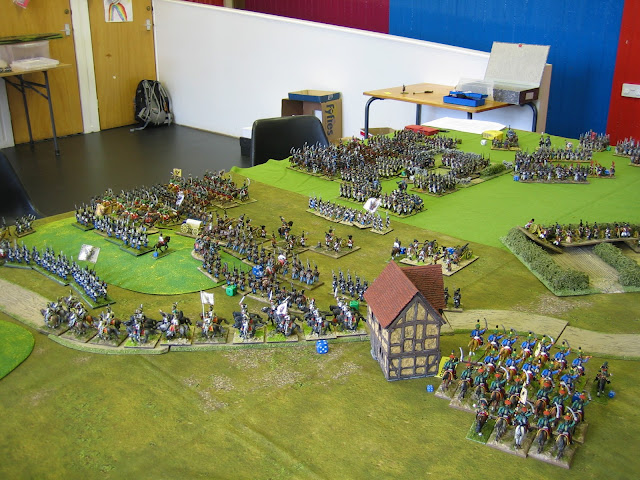 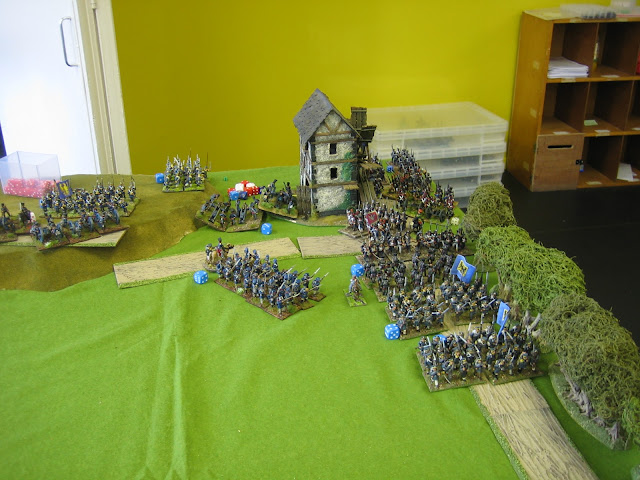 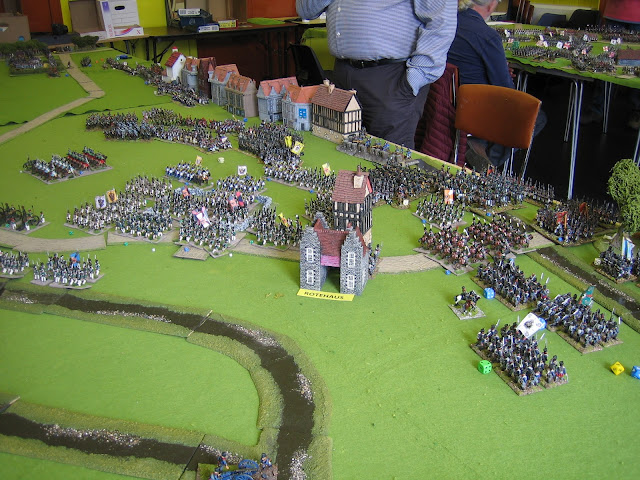 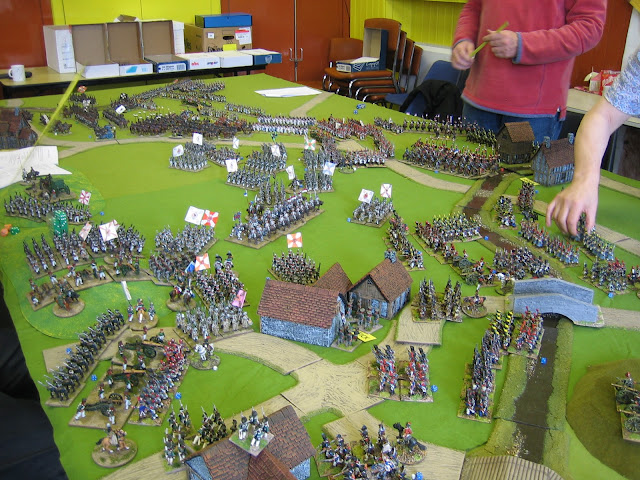 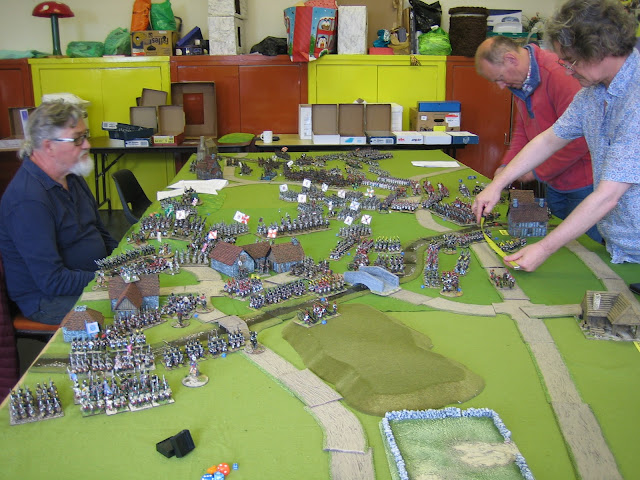 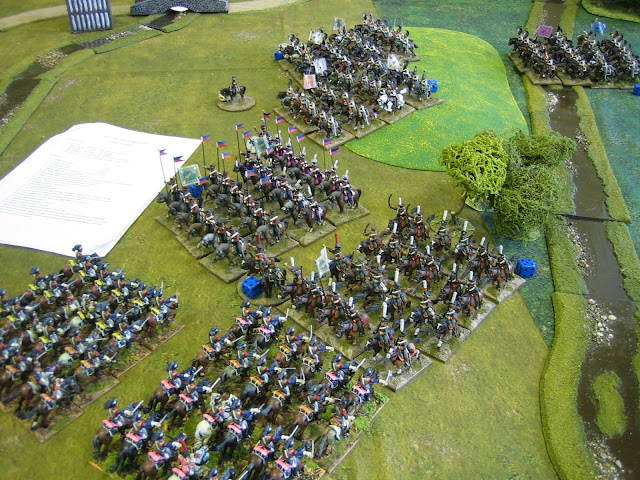 And the French won.

I'm a very lucky boy to get to play games like these with the LOGW.

The Bridges at Taco Reir.

It's been a while since I've put on a game so I thought I'd go to town on it. The game I've decided on is not a big one by any stretch of the imagination. However, it does involve new rules, a scenario by C.S. Grant, and my table with all of my trimmings. 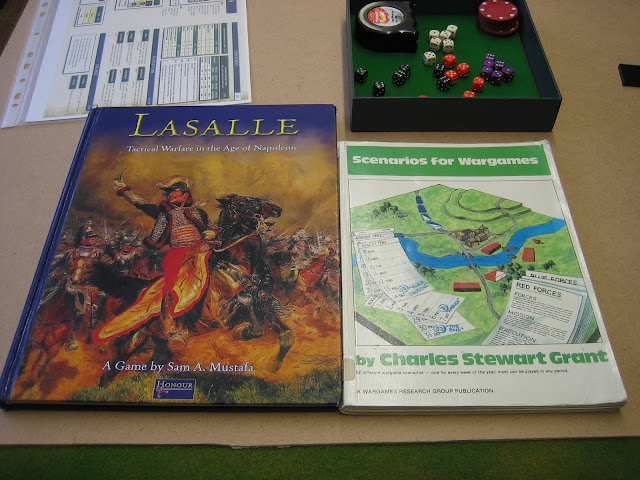 Firstly, the rules we will use are Lasalle by Sam Mustafa. I've had these kicking around the place for a long time. At first all I could see were the negatives but, following positive advisement by friends, I read them again (this time carefully) and thought they might be worth a go. This is quite a reversal for me. Lasalle rules might be Napoleonic but, they are not 'Peninsular Napoleonic' and my preference is always towards very period / theatre specific rules. My reservations still persist but having read the rules again, and again, they seem robust enough for 'home thought' tinkering. Of course, for a first time out, very little tinkering will be required. Indeed, except for calling 6 stand units of cavalry 4 stand units, partially ignoring artillery frontages (the artillery being one of my problems with the rules), and having bigger 'town sections' than the rules propose the rules used will be as per the book.


The scenario is one by the Old Man (most recently Napoleon) Charles S. Grant, who will be forever in my debt for turning the Allied flank in the LOGW Dresden 1813 game quite recently. That aside, Scenario 21,  from his book Scenarios for Wargames has all the makings of a rip roaring tester.


The game is Charles S. Grant's Bridgehead Breakout. Surprisingly, this is a scenario I've not played before. Of course, the scenario I will play is not exactly the same as that in Charles' book. If you want to see the original map, forces and notes you will have to read his book because I will not reproduce his exact scenario here. However, the bones of my scenario has the French breaking out from a bridgehead and the British trying to crush it and force the enemy back across the river. To successfully break out the French must hold their bridges and take the high ground facing them. To successfully crush the bridgehead the British must hold the high ground and dismantle the bridges (by holding a near bank exit for two turns). Any other result is a draw - simples. 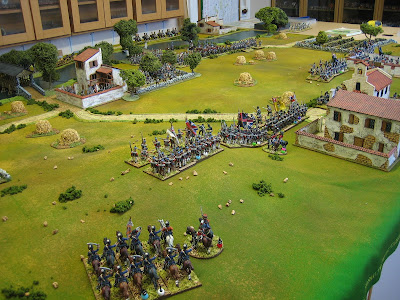 The scenario has two bridges crossing an unfordable river. In the original scenario these are both pontoon bridges. In mine one is a pontoon and the other a wood bridge, the latter recently repaired by the French. The other side of the table is dominated by a ridge of gently sloping hills (the French objective). There are a number of built up areas dotted around the table and three walled areas of rough ground that give soft cover (orchards and vineyards). All other terrain serves only for aesthetic purposes.

In my scenario, remembering this is a rules test (I have no idea how the balance of types will work) the forces are as follows: 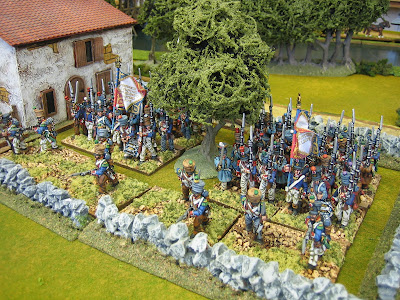 So there we have it. A game set up for Wednesday night - the first game here for ages!