Whenever I think of Seven Years War battles, the first on my list is Zorndorf. I'm not sure if it is because it involves the Russians (never has the expression "red and green should never be seen" been more wrong); because the terrain lends itself to a wargames table so well; because it was so hard fought and such a close run battle; because it is a wonderful combination of all of the above. Whatever it is that draws me to it, few will be able to argue against the fact that, as battles go, Zorndorf 1758 is a wargaming belter.


The last time I fought this battle was in 2014. Looking back at my blog posts, I fought it solo over five sessions using my home amended Piquet rules for big SYW battles. This latest re-fight will be contested by Peter, Graham and myself plus, if I can find someone else who is free for a few Wednesday nights, a fourth player. The game is well suited for two or three players until it really gets going (and I don't mind standing back for those earlier moves) but once it gets going it is better suited to three or, ideally four.

As well as the number of players, this time I plan on changing the rule set. We have been playing a lot of Pike and Shotte recently, so it is probably a good time to play this scenario using Black Powder for the first time. It's a big game, for a first game, but the basic mechanisms for the Warlord rules series don't change much - a new unit characterisation list, a new quick reference sheet and we will be down with the kids (so to speak). At this point I'd like to thank Colin Ashton of Carry On Up The Dale for sending me the Black Powder unit characterisation list he used for his own Zorndorf game. I will be using it as the basis for the unit list for my game.

The main resources I used to put this game together, were:

Even if you don't have access to the books, the two online resources have made such a good job in recounting the campaign and battle that I think it would be pointless for me to rehash it as a complete work of my own here. The work by Jeff Berry is the fullest single account I have found - a truly excellent work.

Suffice to say, in 1758 Prussia faced imminent threats from all directions. Frederick, to relieve the pressure, decided to tackle the Russians under Fermor which were besieging Kustrin on the Oder. In a move of astonishing speed (170 miles in 11 days) he marched 15,000 picked men from southern Silesia to the Oder and crossed to the Russian side of the river, forcing Fermor to abandon his plans. Frederick then joined with the Prussian army set to observe the Russians under Dohna. This brought his force up to c.37,000 men.

Fermor retreated south to a position near the village of Quartschen where he was joined by the 9000 men of the Russian Observation Corps (originally organised, from regiments of unemployed horseless dragoons, hence their riding boots, for the observation of East Prussia earlier in the war). This brought his force up to c.43,000 men. Here he waited, facing north, in a very strong defencive position .

Frederick had nothing  but disdain for the Russians prior to Zorndorf, "describing Russian troops as worthless, insisting that a disciplined army would make short work of any number of them [Showalter]". When Frederick asked Seydlitz for his opinion after the battle "the general responded more or less curtly that such an appellation hardly fitted men who had repulsed Prussian troops so decisively [Showalter]". The Russians were now recognised as a great military power in the war.

So, what does my initial set up look like? Well it's impossible to show you in one photograph because to deploy all of the troops I have to raise the drop leaf extension on the table (making the table six feet wide and just under fifteen feet long) and this doesn't give room to position a camera. The best I can do is this.

The Grunds: These are small watercourses in wet depressions of varying depth and difficulty.
The Stein-Busch: This is an open wood.

Quartschen and Zorndorf: Villages comprising various built-up areas.
High Ground: I have added high ground (a 1" contour high) to much of the Prussian side of the table because the Russians are sat at the bottom of a large shallow depression with a large stream (the Hofe-Bruch) and boggy ground immediately behind them. However to troops on the ground the terrain seemed fairly flat. 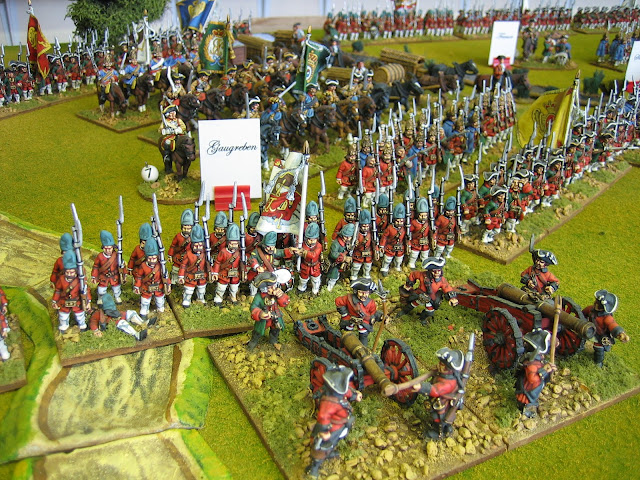 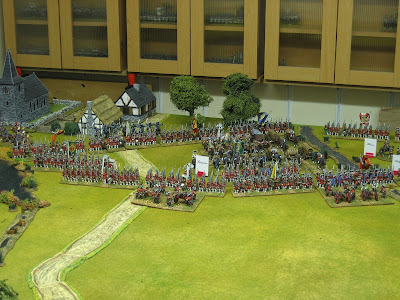 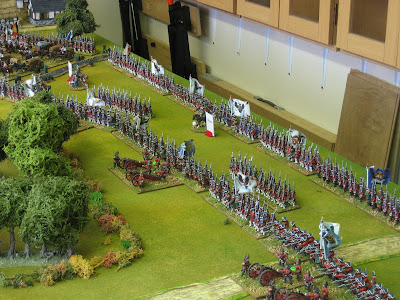 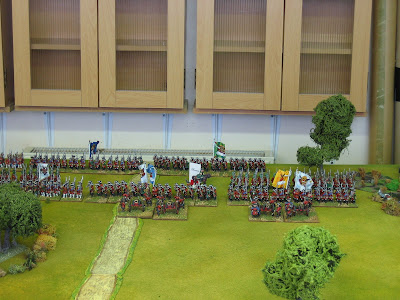 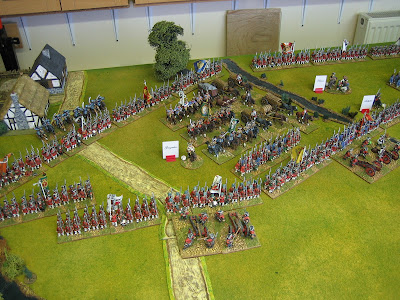 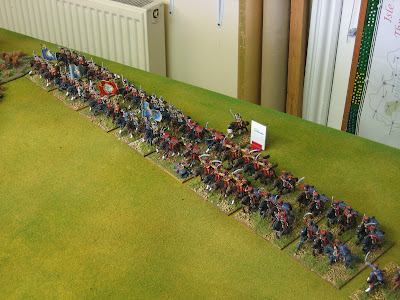 Note at this point that none of the seven units of Cossacks present at Zorndorf , three on the left wing and four on the right, have not been included as being under any commander. See scenario notes. 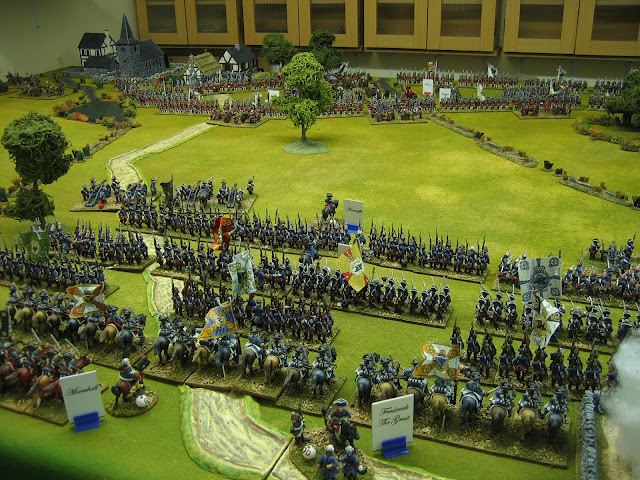 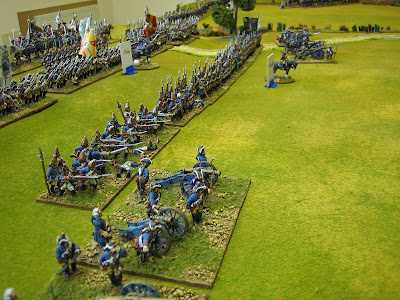 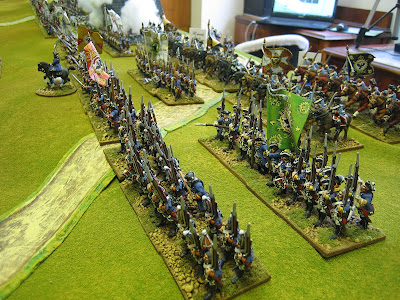 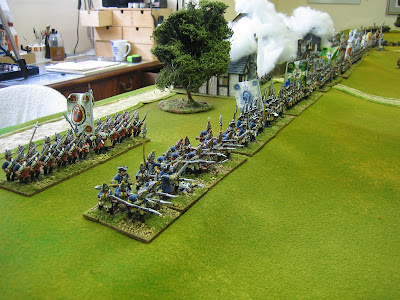 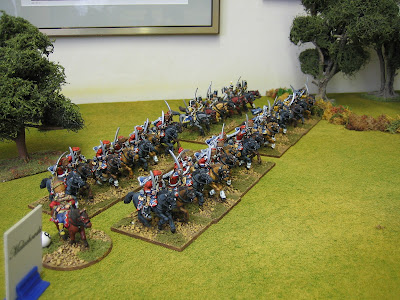 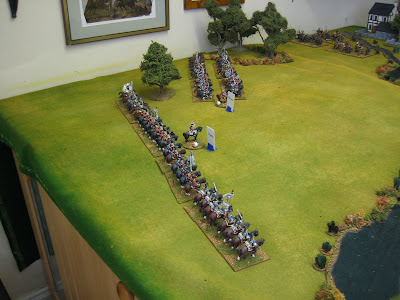 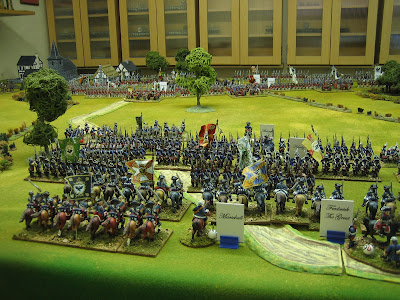 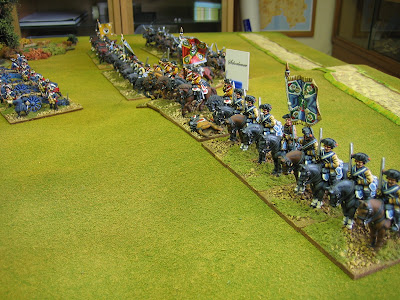 Note that the Prussian artillery has not been put under the command of any field commander.

The artillery comprises: 6 batteries of Field Artillery (2 of which are Brummers, one positioned at each end of the artillery line).

Russian Command Blunders: Because the ground behind the Russian position is very difficult going any blunder roll that would take the unit off the Russian table edge will be ignored. Instead the unit raids the stores of brandy and vodka in the regimental baggage and must re-roll for the result:
Note: Deal with disordered and shaken troops as per the normal rules. Unreliable pertains to effected units for the remainder of the game and they should be marked as such. If non-Don Cossacks blunder in this way they should be removed from play.

Note: Several references to Russian troops raiding their own baggage for alcohol and becoming unruly, especially by the Observation Corps, are recorded.

"General St. Andre, I will try to get through to Schwedt!": At 2 p.m., with the battle at crisis point, Fermor departed the field with those words. To represent this man's craven disregard for the men he left behind, every time a Russian unit breaks two d6 must be rolled. On a result of 2 - 3 Fermor is removed from the field and Saltykov will assume overall command of the army. Fermor counts as a lost unit to each Russian command.

Cossacks: The Russian Cossacks do not have a commander of their own and will not accept orders from field commanders. Instead, the Russian player will need issue orders to Cossacks directly from the C-in-C. If the C-in-C is used in this fashion he cannot issue orders to other troops subsequently in the same turn. Up to four units of Cossacks can be nominated as Don Cossacks - most of the bad ones had been sent home as worthless to the war effort by 1758.

Moller: Historically the Prussian 2nd Field Artillery Regiment (at Zorndorf) fell under the direction of Moller but, as far as I can ascertain, his was only an administrative command. Consequently I have put him with the 'General Staff' as part of Frederick's command stand.

Edit: Since taking the photos I have reduced the Russian artillery and redistributed the remainder equally along the line. The Russians have one less battery of howitzers and I have replaced the O.C. field battery with a light field battery. This is probably still being quite kind to the Russians - they had 136 pieces compared to the 193 belonging to the Prussians and numerically they should have a scaled eight guns (four batteries) to the Prussian twelve guns (six batteries) - but, four batteries does not allow for a good spread along the line and the weight of the Prussian guns (all heavy Vs one heavy) should help balance the fire-power of the opposing artillery well enough.

Edit: I have made Gaugreben aggressive. His cavalry, especially the St. Petersburg horse grenadiers, were very feisty on the day.

Edit: I have made all Prussian grenadiers 'steady' to allow Manteuffel to attack with more confidence. The 'steady' rule also applies to IR 2 of Manteuffel's command (it was a very good regiment).

Edit: Up to four units of Cossacks can be nominated as Don Cossacks.

Edit: I have shortened the Galgen-Grund beyond the Russian front line by about 10". It now only extends to a point level with the front of the Stein-Busch.

Edit: 'Steel wall' and 'Rear rank reversed' have been better defined and ruled upon. 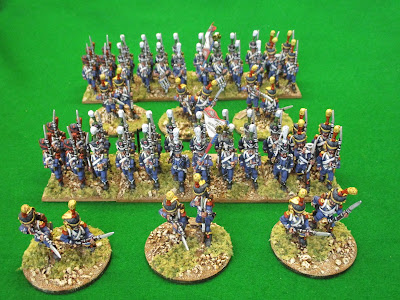