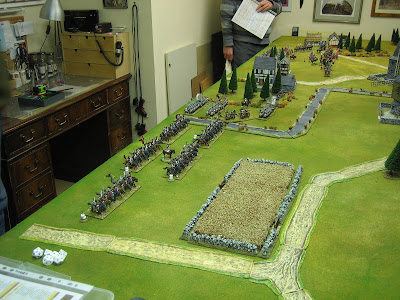 Peter's Austrians deployed on their right with their strong command cavalry holding the flank.

The cavalry would suffer early in the battle from artillery fire from the massed Prussian batteries. 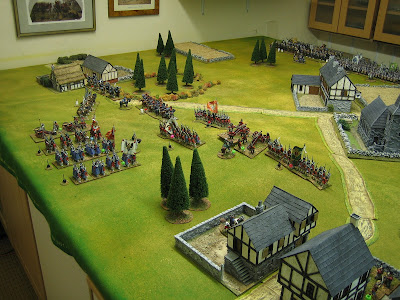 Graham's Russians deployed on the left of the Allied line. Their reserve infantry were deployed in columns, ready to react to the Prussian deployment. 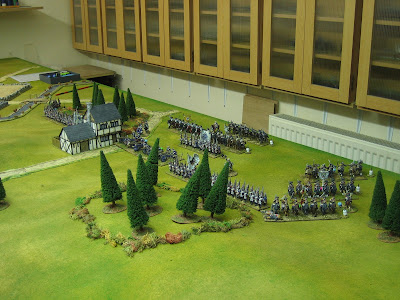 The Prussians deployed facing the Austrians. 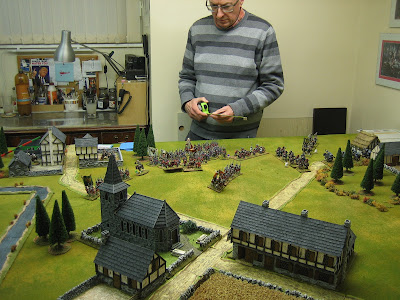 The distribution of initiative in the session was pretty even. The allies got most at the start, then it balanced up.

The Russians, out on their own, spent much of the early initiative to redeploy onto the Prussian right flank; this threw any hope of a planned early Prussian attack against the Austrians off balance. On the other flank the Austrians demonstrated with their infantry and launched their cavalry into the attack. 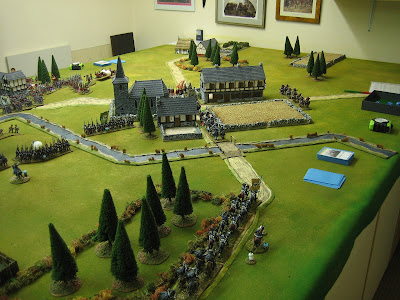 The Prussians dispatched infantry and cavalry to slow the Russian advance. 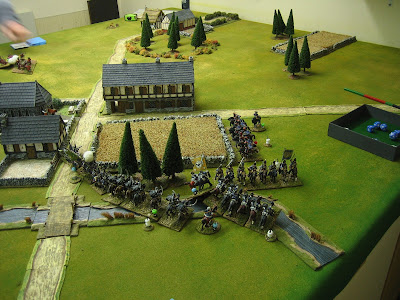 The Prussian cavalry with infantry support duly slow up the Russian attack and temporarily throw its advance elements into confusion.

By the end of turn two several allied units had been repelled. 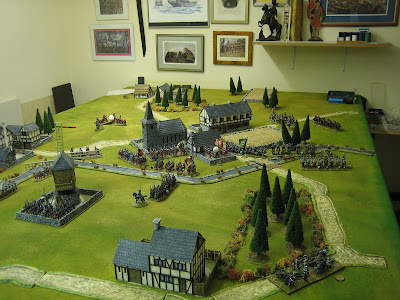 This shot shows the position of the Russians at the end of the first session. 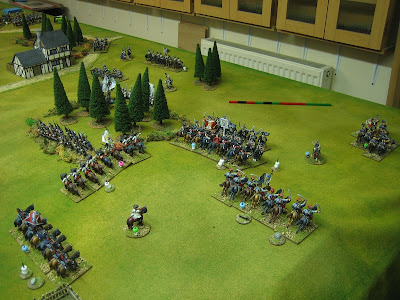 The Austrians have had one success. Their cavalry has managed to summit the hill first and is now fighting down hill.

The Prussian infantry, in the wood are seriously threatened by a flank attack. This will be touch and go - will I turn a manoeuvre card before Peter turns a move in difficult terrain card. 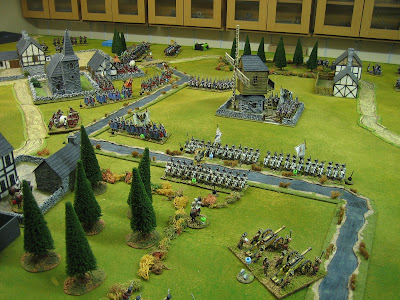 This shot shows the Austrians facing the windmill and the Russians, still in columns, massing for their attack.

Note the Prussian Guard infantry holding the windmill. In most games this unit gets clobbered but this time it did sterling work. It has stormed the hill, thrown the Grenzers out of the windmill (both units were routed early on) and is now peppering the Austrian line infantry at the stream. 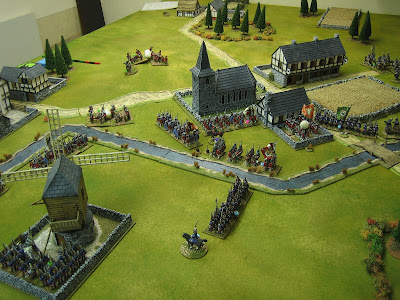 The Russian position at the end of the first session. Again, the Prussians desperately need an elusive manoeuvre card. 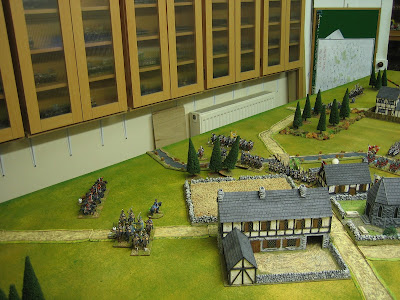 A shot of the extreme left flank of the Russian line. Barely visible, coming up the road behind the wood, the Prussians are trying to bring up a battery to face the Russians.

On the whole, the first session went decidedly in favour of the Prussians and the Allies are facing ever more difficult major morale checks*. However, the Prussian line is threatened on both flanks and I feel decidedly uneasy about my position - next week it's going to be nip and tuck.

*In my amended rules for the SYW we play the effect of major morale in a very different way to that in the official master rules. For one thing, each side has two major morale cards and our rule runs as follows:


MAJOR MORALE CHECK
The routing and pursuing units of both sides move at this time regardless of terrain; they move at their full normal rate; they move for free. Routers always ignore the impediments of terrain.

When this sequence card is turned it is played against the enemy army. The enemy’s C-in-C must take a major morale check. He does this by rolling a d20, adjusted for command quality (-2 to +2 in this case) versus the total number of units he currently has destroyed or routing. To pass the check the die result must be higher. If the check is passed no further action is required. If the die roll is equal or lower than the number required the army fails the check and:


If the army has no C-in-C or morale chips to take the major morale check it automatically fails, the army adds one Dress the Lines card to its sequence deck,
and must individually check the morale of each of its command groups.

Command groups forced to take major morale checks do so by rolling D12, adjusted for command quality, versus D8. If the command is currently leaderless a D6 is rolled. If the die roll is higher the command passes the check. If the command fails the army loses one morale point; if the army cannot pay a morale chip all of the group’s units are downgraded one battle quality level (determined - eager - ready - battle weary) and any units already rated as battle weary are routed.

Recovering lost officers. On the appearance of this card any officers lost in battle can be recovered on a successful other difficulty check versus D8. Each test costs one initiative point. If the officer is recovered at the first attempt the replacement officer will be the original one (he had just fallen off his horse, or something similar); if not, the officer will be a new officer and his quality will need to be diced for.

This game is a re-run of the first game fought this year but with the three players taking control of another army.

The scenario is a simple one. It is a late SYW affair between a small well led Prussian army comprising an excellent mix of troops including a high proportion of elites and a much larger, poorly led allied (2 player) Austro-Russian army of average composition. Victory will be achieved by forcing the enemy into submission.

For those unfamiliar with Piquet, a sequence deck is a deck of roughly 24 - 30 cards that governs each side's move sequence. The sequence deck of each side is tailored to reflect what it was good and bad at. Each deck comprises cards that govern the movement rate of troops by arm (infantry, cavalry and artillery), how often troops can shoot, resolve melee, rally, change formation, etc.; there are also do nothing cards, and army morale check cards. Each turn the players get a random number of initiative points (up to about 20) which they use to turn cards from their sequence deck and spend to activate troops using them as they are turned. A Brilliant Leader card is a wild card, redefined each time it is turned, giving the army greater flexibility and freedom of action; a Command Indecision card reduces the army's current initiative to zero and effectively ends the player's go when it is turned.

Working on the assumption that dice rolls even out, all other pre-deployment dice rolls, to discover sub-commander ability and troop quality, will be determined by the players in the usual way. The allied C-in-C (the final arbiter in their sides distribution of initiative points) will be decided by coin toss.

The armies are quite small, with each commander controlling 14 units or less. The OOBs are as follows: 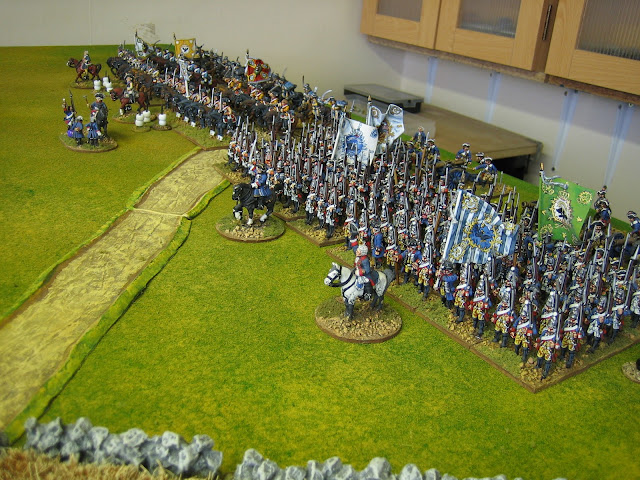 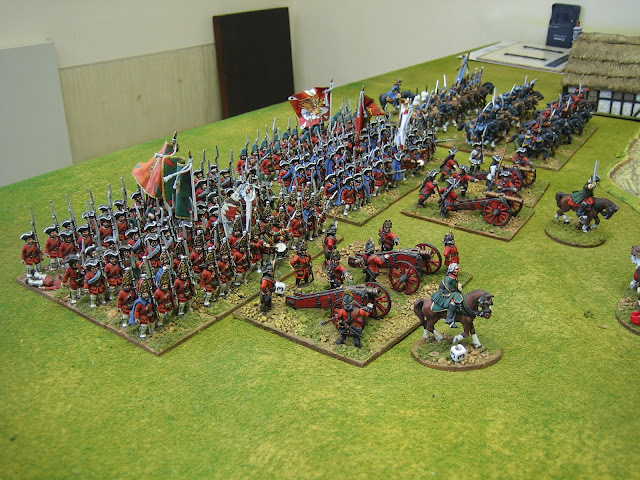 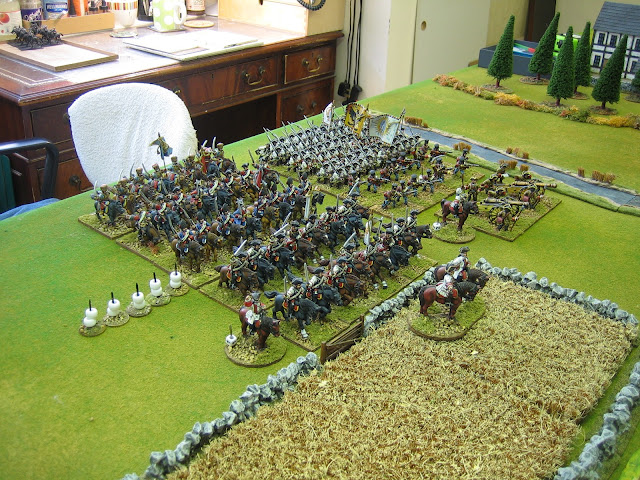 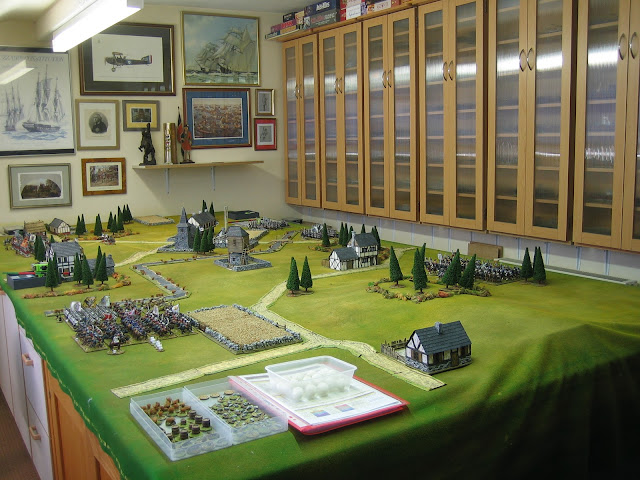 Because the forces are smaller than those I usually deploy I decided to clutter the table with lots of terrain. Here's the table I came up with. This terrain should localise the combats and allow some clever manoeuvring of the forces - it did in the first game. The table is 12' x 6'.

The Austro-Russians will deploy first. Their initial deployment zone will be approximately 2' on table and 18" from the flank edges. Within that zone, they can deploy as they like. The Prussians deploy after the Austro-Russians anywhere in a similar zone (on the other side of the table).

We will start to fight this battle tonight (it will probably go to two sessions). A report will follow.

I have made a decision about my artillery batteries. They will each be two guns strong with a single 'train' piece, either a limber or caisson, to represent the artillery battery when limbered. 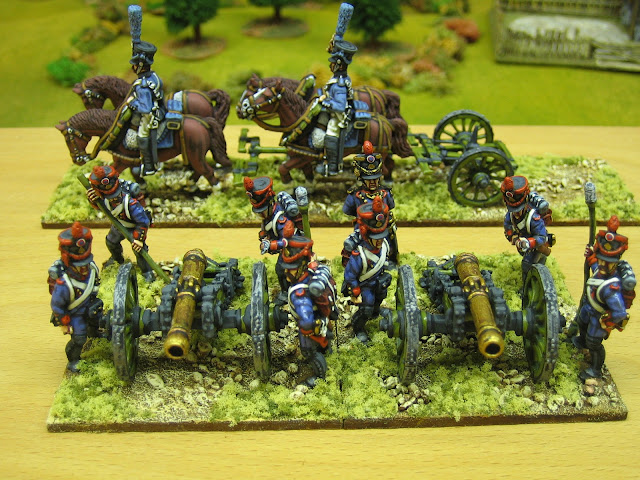 The latest addition to the project is a battery of French foot artillery. Bizarrely, I've got very little uniform information about artillery so had to rely on my ever reliable single combined volume of Funcken books (has all the Lace Wars, Napoleonic and Franco Prussian in it) and google for most of the details. 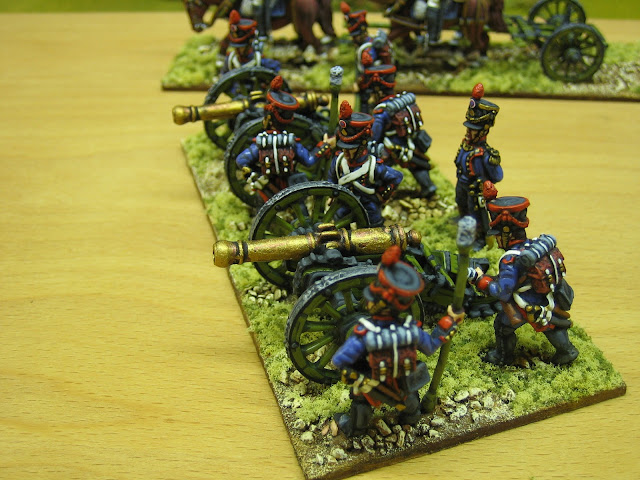 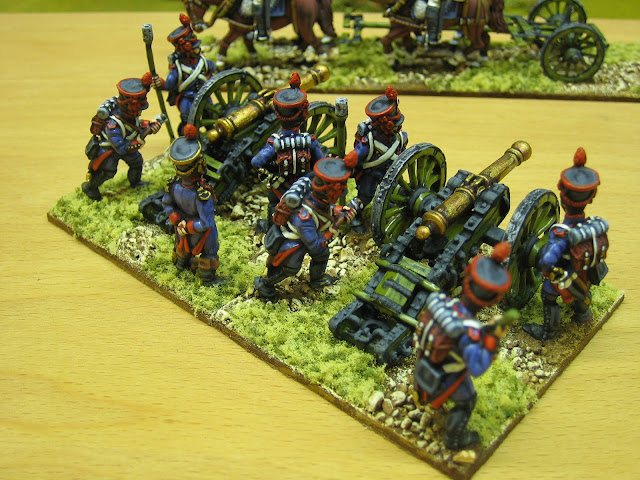 Though it would be nice to have a limber per gun, possibly with a caisson added too, I think one train piece will be adequate for game purposes. In some games I've played, where the full panoply has been fielded, the train ends up being put back on the shelf because its footprint takes up too much room on the table - so I wonder if having more train pieces might be a waste of money and painting time.

At some point I might add the traces but, for now I'm leaving them off.

One thing worth pointing out about the photos is that the French artillery green isn't quite so green in the flesh (lighting?). 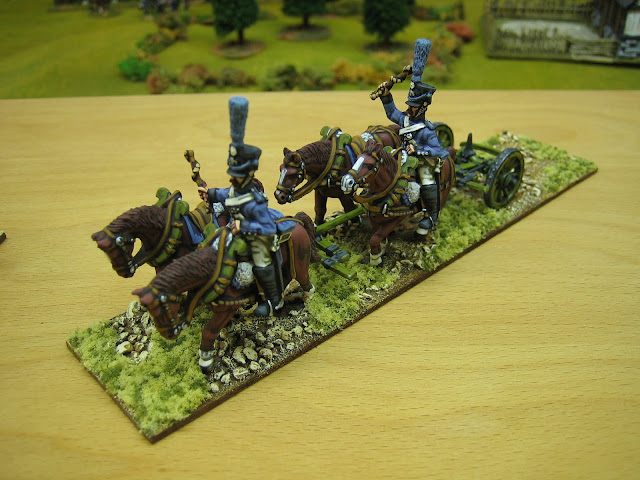 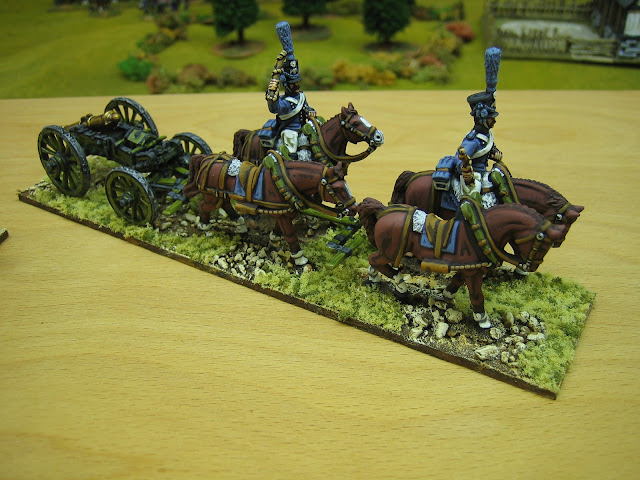 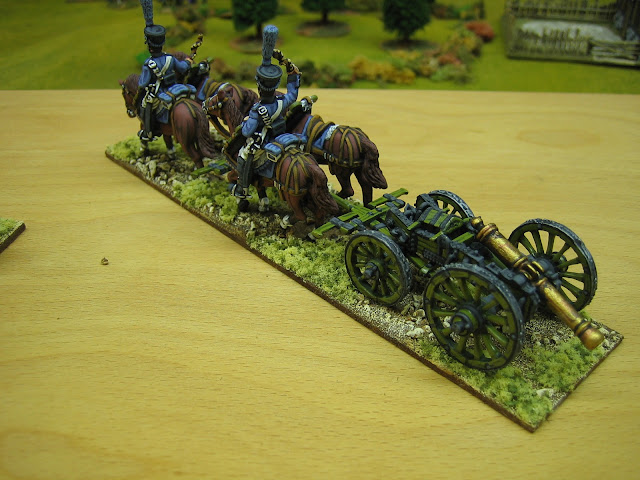 I think they came out alright, and hope you do too. The figures are all Front Rank.

First batch for the Peninsular project in 2018

Over Christmas and New Year, I decided to use some of my 'holiday time' to get ahead of the game with the project quota for January. Most of the rest of this month will be taken up painting commissions, probably long into the night, so I'm not expecting too much more to be completed for my Peninsular project until well into February. 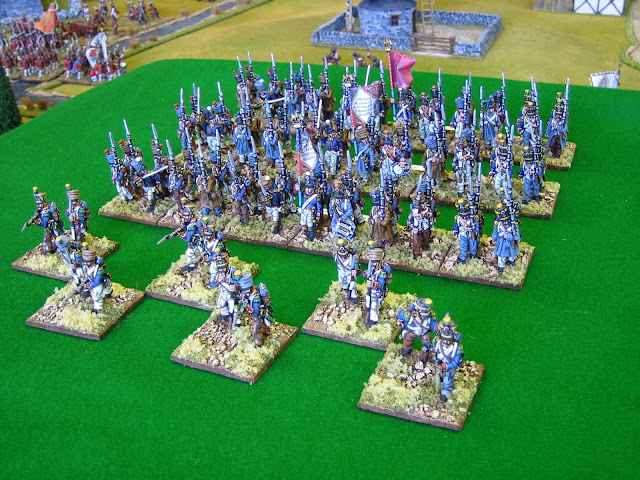 The units I chose to add were three battalions of the 27th Ligne.

Figures are by Front Rank. They were painted by yours truly using Humbrol enamels (mainly).

The tricolour flags are by GMB Designs and the fanion is by Flags for the Lads; the latter had to be cut down because the GMB flags are several millimetres smaller than FftL flags. 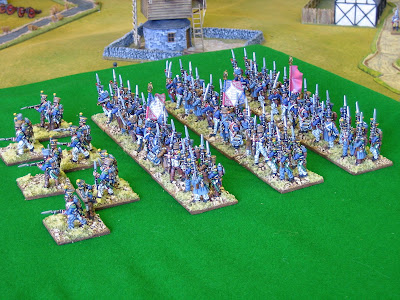 Another difference between GMB and FftL flags is the paper they are printed on. GMB paper is 'shiny' and consequently the colours seem more vivid than FftL. However, GMB paper is also much heavier and doesn't bend as easily for the 'on the fly' look. 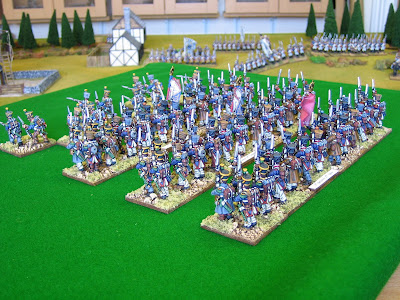 The reason I chose this regiment is visible here. The regimental distinction is not only a colourful one one, it's also blindingly obvious, even from a distance. 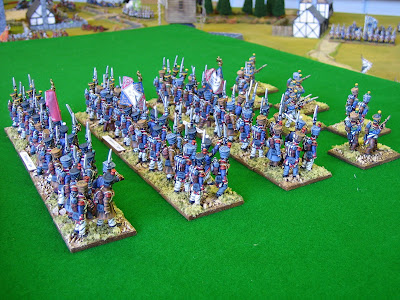 These are the last troops in campaign dress that I had in the lead pile.

The next six battalions of Ligne will be in full parade dress.

I have chosen to field the French in both uniforms (full and campaign) because I like uniform variation and French full dress is very striking.

I rather fancy doing a converged grenadier battalion, or two, in great coats for even more variation. 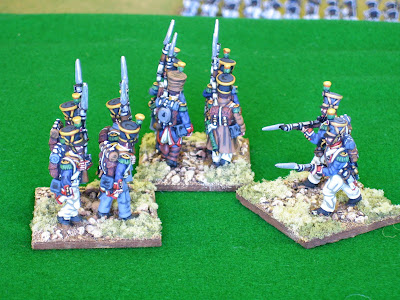 Now Santa has been, I will be able to do the three battalions for 2nd Legere - with grenadiers in bearskins.

Speaking of Santa and wargaming, he was very good to me this year. He also brought another battalion of Legere (bringing my total lead pile to six); a regiment of Polish lancers; a couple of companies of riflemen; Six battalions worth of Portuguese line skirmishers in shakos which, having wrongly ordered in barretinas over a year ago, Alec at Front Rank kindly replaced; a hardback copy of Brent Nosworthy's Battle Tactics of Napoleon and his Enemies; Osprey's Napoleon's Polish Troops. Ta, Santa!