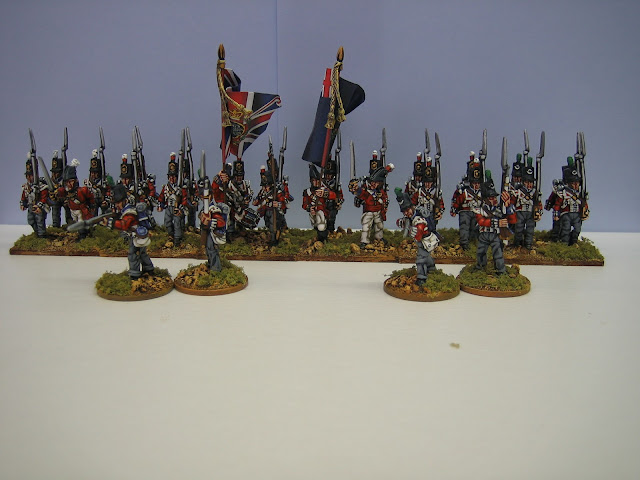 Well, the Peninsular project trundles on. I currently planning on adding a new unit every week. This week I've added 2nd KGL. I think a unit a week, of British at least, will be about right. Next up will be the last unit I'm going to do for my von Lőwes Brigade, the 5th battalion KGL. I'm not going to do the 7th KGL. 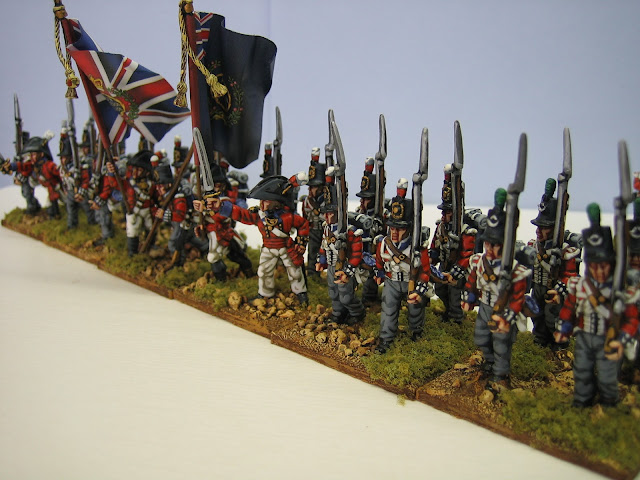 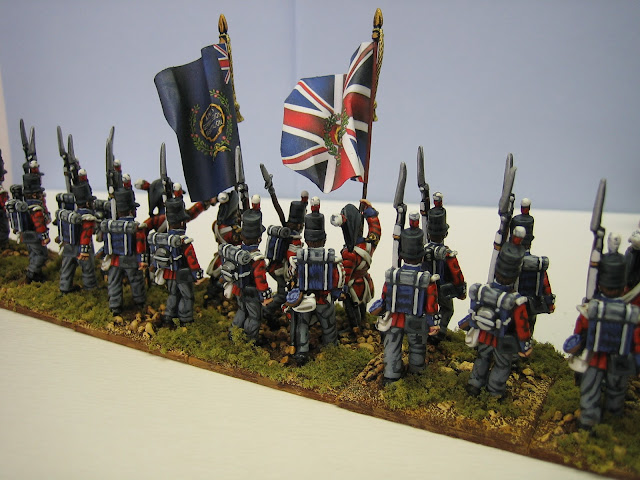 This time I've done the back packs the right colour from the start.

It has been some time in coming but, at last, the Peninsular War Project has begun. I'm very excited at the prospect of getting a new period onto my table.

It has been several years since I last painted a British Peninsular War unit (for a client, I've never painted one for myself) so I thought I'd begin by doing a practice unit to get my eye in, so to speak. Consequently, this unit has taken several hours longer than most units will in the future because I've had to continually check things by looking them up in my books and via google. A recent purchase of note is British Napoleonic Uniforms by C.E. Franklin which has prints of just about every piece of equipment and weapon from several angles, not to mention a page of plates on the uniform for every British regiment - highly recommended. Unfortunately, it doesn't cover the uniforms of the KGL and hence the Google searches because, of course, that's exactly where I've started.

My first three units will be the 1st, 2nd and 5th Battalions of the King's German Legion for Von Lowe's Brigade of 1st Division. 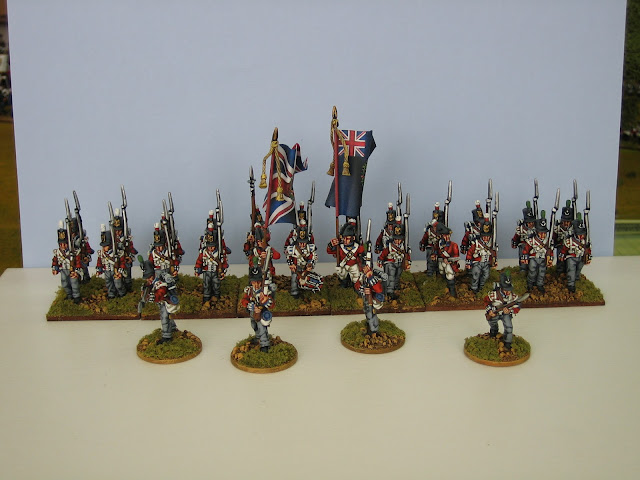 So here is the practice unit for the British: 1st Battalion KGL.

It comprises 28 figures (Front Rank Figurines), including representative skirmishers. It is painted in Humbrol enamels and the flags are by Flags for the Lads (flags very kindly donated to the project by a reader). 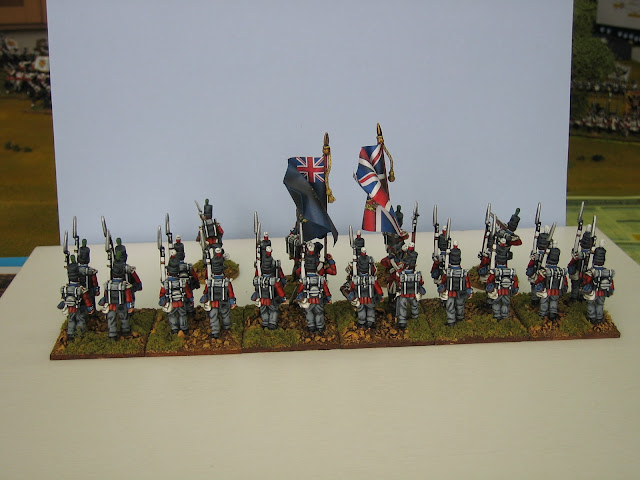 I have chosen to base the unit, after much thought, on six bases, each 40 mm x 40 mm, because: 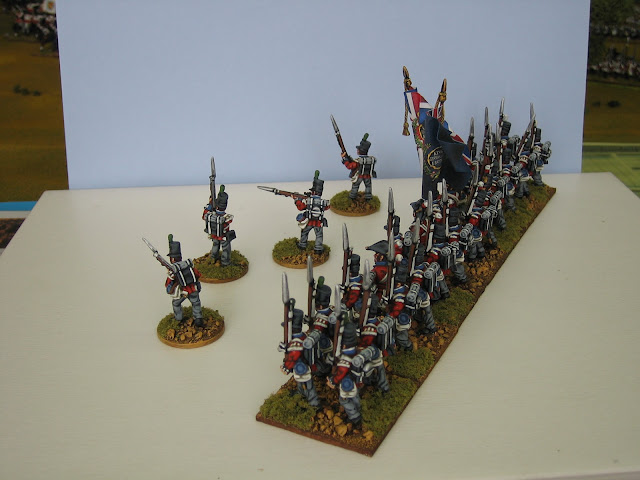 The Basing system has its downsides for British infantry, in that two stands have to be used for 'over sized' flank companies, but I understand this is a frequently used compromise and will be hardly noticeable in play. 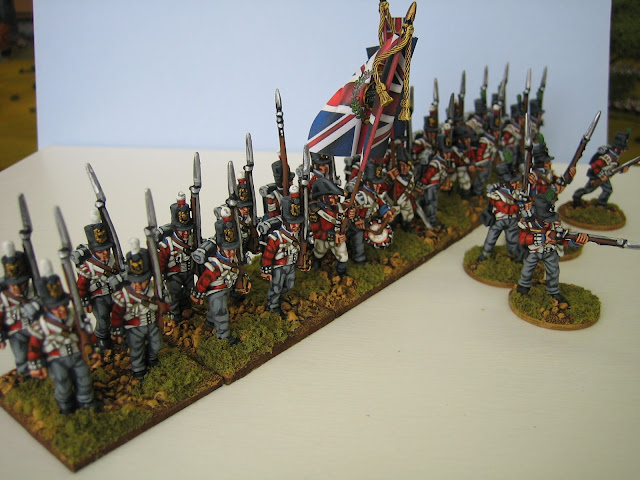 I really like these new 'reinforcement pack' figures by Front Rank. The belts and lace are well defined and, the fudged lace pattern on the front of the jacket allows this usually difficult lace to be done with very clean lines with the minimum of time and effort: I applaud Alec for his forethought for the figure painter. 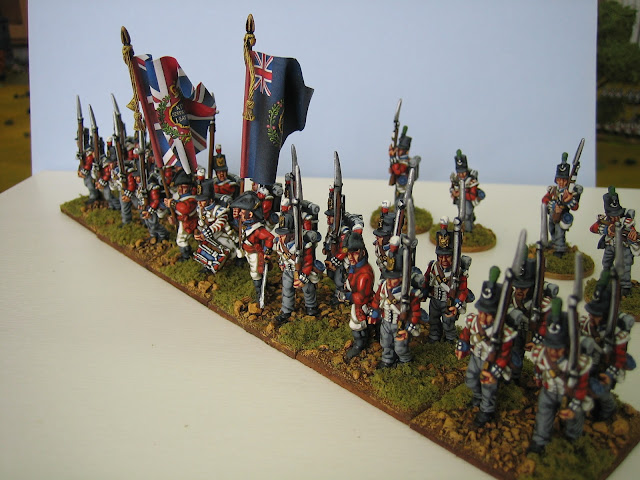 Choosing to go down the pre-printed flag route, rather than hand painting my own, was a difficult decision. However, since discovering acrylic ink blocks (you use them like water paint blocks but they are indelible), painting away the white paper line with flag matching colour has become much, much easier. I use Inktense Blocks by Derwent in the basic box set of 12. Properly finished, I've become a convert and a big fan of pre-printed paper flags.

All in all, I'm pretty happy with the way this first unit came out. If you spot any glaring mistakes I'd appreciate the heads up.

Next up, 2nd and 5th Battalions KGL.

I asked for glaring mistakes to be pointed out to me and one has been (by Rob Bresnen over at LAF). Over breakfast coffee, killing that hour between my son getting up and going to school, all was made right: I prized off the rear rank figures, corrected the mistake and glued the figures back again.

MISTAKE: The backpacks of the KGL line battalions were painted dark blue (black for light battalions) and when the general order came, in 1808, to paint them black they ignored it.

This was a mistake I was happy to correct. Firstly, it was simple to correct; secondly it's a very nice KGL distinction. 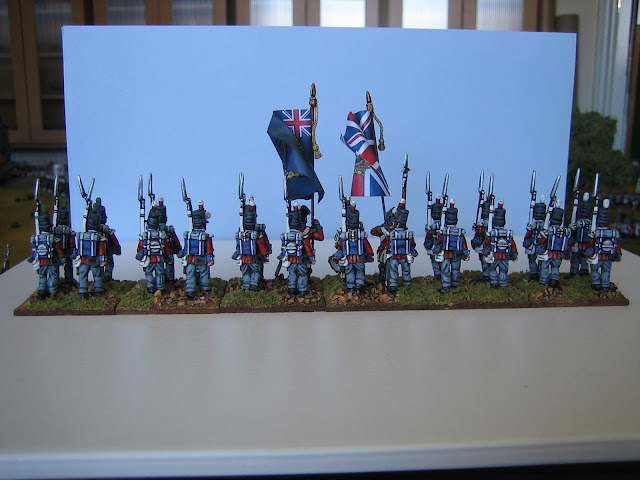 The Battle Of Lobositz October 1st 1756 - the order of battle.

As some of you will know, I plan on taking this game to the Derby later this year and I don't want a last minute rush to work things out so, with help from the Lads, I'm going to get the scenario sorted out over the next two to three weeks.

Last week Peter and I spent an evening talking through the battle and working out one of the harder parts to get right - Gessler's suicidal cavalry attack. The discussion has led to some slight alterations to the initial set up.

Firstly, the road network between Lobositz and Sullowitz has been altered. The bend at the Sullowitz end of the sunken road has been made into a shallow 'S' bend. This 'fudge' was made in an attempt to bring the Morellenbach forward, immediately at the 'old' turn in the road, to allow a greater depth of deployment behind it and allow room for a ford giving access to the area lying behind the sunken road. This is more important than I at first thought.

Secondly, although I changed this shortly after my last post on the Lobositz set up, you will note that Sullowitz has been shifted farther to the left and the Park's woodland has been omitted.

Thirdly, I have managed to compress the depth of the Prussian deployment area allowing Wchinitz and the Prussian line to be pulled back a few inches towards the Prussian baseline. The initial deployment, especially of Gessler's cavalry, is no longer strictly historically accurate but this has not significantly changed the tactical situation. The reason for the change is to widen the no-man's land between the armies. This will be useful for the cavalry to manoeuvre in. To the same end, the Graben stream has been shifted and extended somewhat to channel any move made by Gessler's cavalry towards the sunken road.

Purists will read this with their heads in their hands, cursing me for playing with geography. Of course, this assumes that the first set up was geographically correct in the first place which, of course, it wasn't: for me to accurately fit this game on a single table would require it to be nine feet deep! It is nearly always difficult, if not impossible, to represent a historical battle, using 28mm figures, with a wholly accurate ground scale; compression, especially of the depth of ground, in most cases, is mandatory. Having said that, in my opinion, the tactical problems are still the same because table depth is usually much less important than an accurate frontage in most 'line 'em up' combats which, in essence, the Lobositz deployment is. 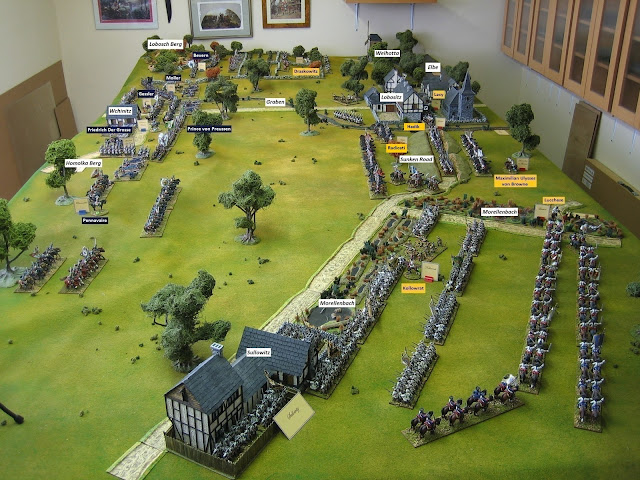 As previously stated I have amalgamated information from three sources to set up this scenario, all of which differ slightly, to come up with a set up that best suits the game. Consequently, this set up doesn't exactly match any of them but, if they can't agree why should I?

I have used, to a great extent, the command structure given by Jeff Berry on his excellent Obscure Battles web site, which has, by the way, the most comprehensive single account of the battle I've come across. The one major difference in command structure, and jaunt into fantasy on my part, is my use of Hadik. In reality he should be in command of some of the cavalry under Radacati. Hadik is surplus to gaming requirements in this role but, for ease of play, the Austrians are a 'brigadier' short to command the grenadiers and so forth out in front of Lobositz and in the sunken road (actually part of Lacy's division) and, as this command would put Hadik in approximately the right place at the right time (and rather than have Blankety von Blank), I have re-assigned Hadik to it.

Next up, the scenario special rules and notes.