French get to the half way stage - Roll Call! 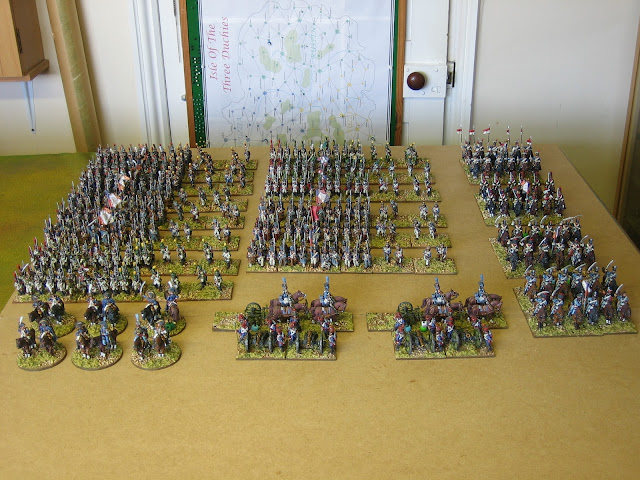 Twenty units done!
My Peninsular French 'army' has hit the half way stage!

There is only one criteria for units joining this 'army'. They must have fought, at one time or another, in the Peninsular between 1808 and 1813. It helps their bid to join if they are wearing an interesting uniform; it also helps if I have already have a flag for them in my 'flag bag', to save a little on cost. 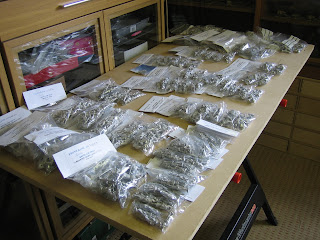 So what, from the French lead pile (this is most of the French order - it grew), have I painted so far? 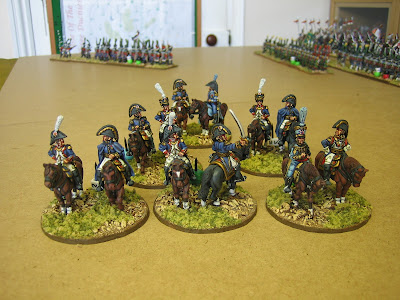 These are for use as divisional or brigade level command groups (depending on the rules in use). The guns are not glued to the bases. 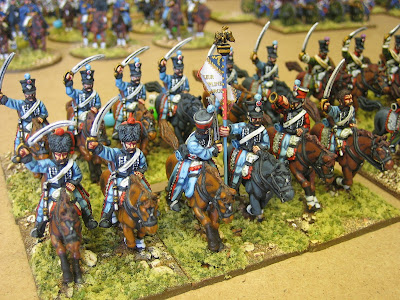 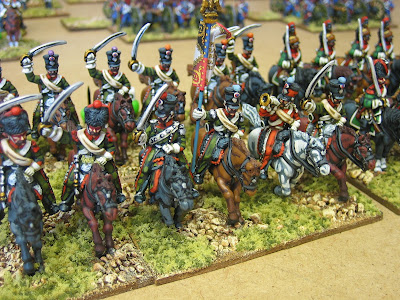 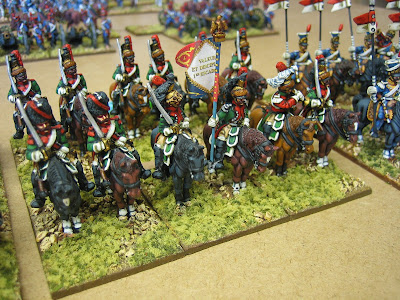 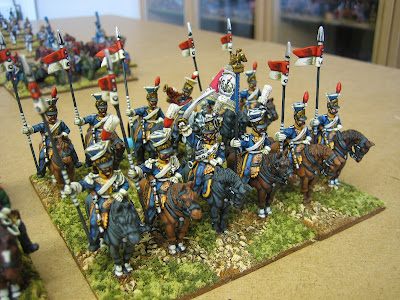 Caveat emptor: The plume colours are guess work, based on internet images. 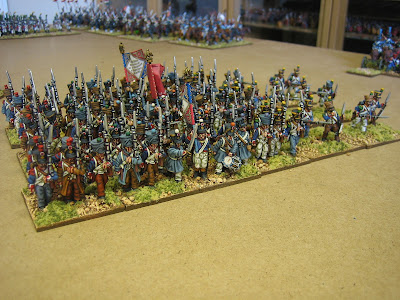 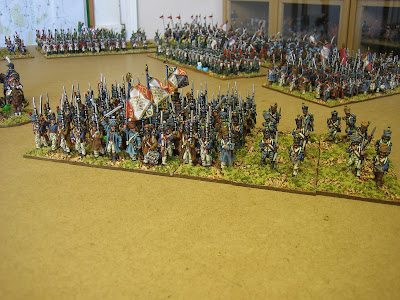 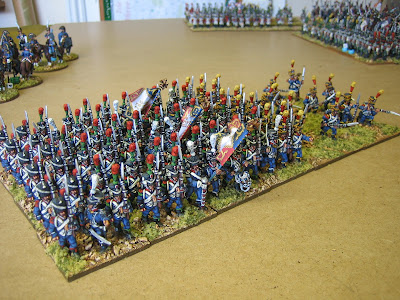 This unit has great plume colours! 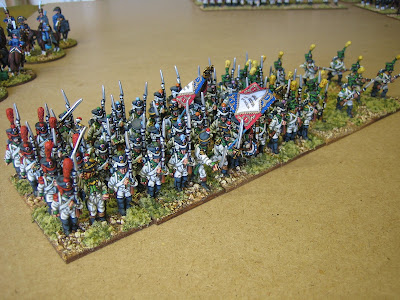 I absolutely wanted a few units in white. 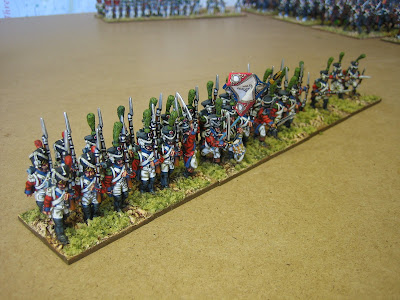 Red uniform and not Swiss. Also interesting because they are a legere unit wearing a ligne uniform with elite company distinctions.

This unit has no voltigeur company. 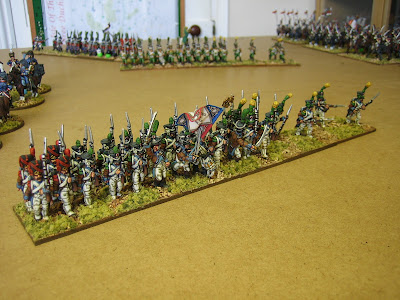 In brown. Again legere in ligne uniform and elite company distinctions. The chasseurs have a lozenge shaped plume - these fashioned using Miliput. 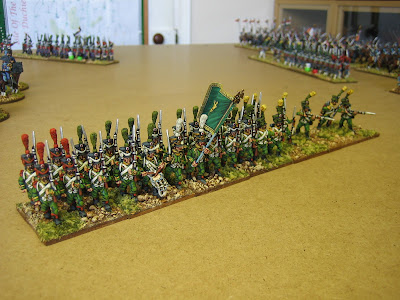 A legere unit in bright green.

I might change the flag - this one is for the 2nd battalion; I thought the large harp it bears would look good but, in retrospect, the flag for the first battalion bears a tricolour central design on a green field with harps in the corners, and it might be more eye catching. 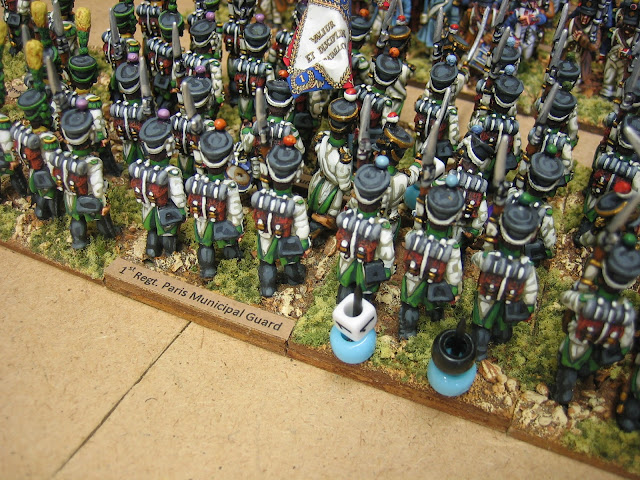 The centre stands of each unit (when in line) bear the unit's name plate and it's 'roster bead stand'.

I mentioned these before. They are not to everyone's taste but I like a paperless office and everything visible on the table. The beads are the dice modifier beads for playing Piquet's FoB2. The blue one on the left is for defence die and the one on the right one for combat die (blue is Up 1); The number bead is the command group ID bead; the black bead shows that the unit has not used its first fire. 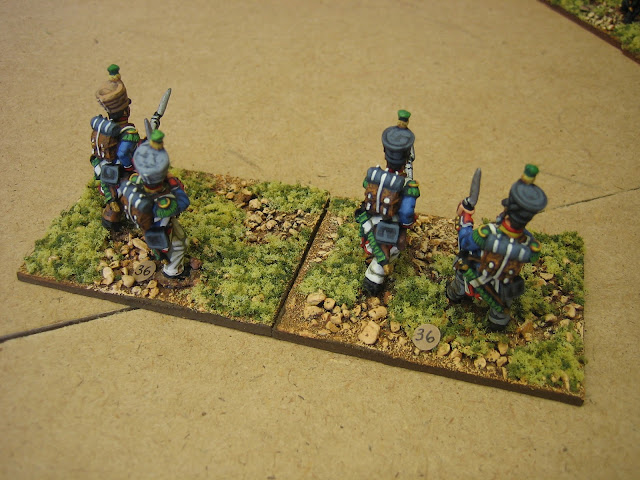 Skirmish stands bear a small number on a hole punch chad. In this case indicating these are skirmishers of the 36th Ligne. As the collection grows, this will be useful for sorting things out post battle.

All figures are FRONT RANK.

All were painted by yours truly using enamels (in the main).

Still to do (with half a dozen units to buy), for a total of 40 units plus command:

When both are up to the 20 unit, 'small army' strength, they will be worthy of a four figure 'C-in-C' stand apiece.

Getting to this point has been hard work. Painting both sides slows things down, especially at the start when there isn't enough to game with (and your painting a lot of Napoleonic stuff for clients during the week). Let's see how it goes from this point on.
at August 20, 2019 14 comments: