Crusades Project. First of the Saracens. 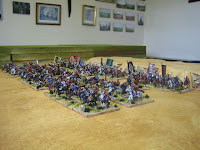 Well, the first half of the Saracen cavalry are now completed. Just enough to photograph for you to take a peek at. All figures are Perry Miniatures painted with enamels. The flags are from a variety of sources and, as with all of my armies, have been scanned, mucked about with on MS Paint, sized on MS Word, printed, stuck glued and sealed with a layer of PVA and then painted with enamels

Some command stands first, from left to right, Turkoman tribal leader (horse tail banner out of shot), Seljuk 'General', another Seljuk 'General' and two shots of an Arab 'General'. All are sub-commanders. 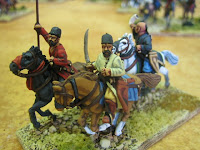 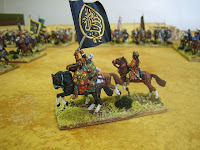 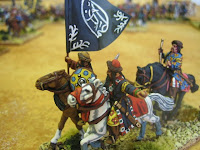 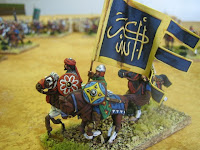 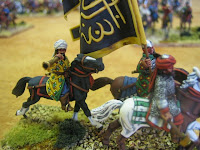 Next some Turkomen tribal cavalry / horse archers. The last shot shows the basing layout. The stands are 60mm x 90mm and each unit, strangely, is 11 figures strong (the 2 tribal leader stands had to come from somewhere - after thoughts!). 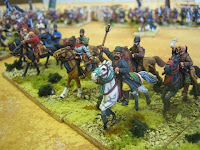 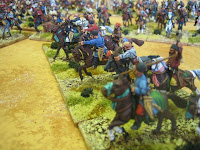 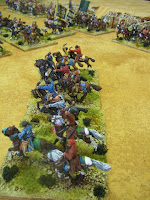 Now we get to the good stuff. Three units of Ghulam cavalry. Each 18 strong based on four 60mm x 90mm stands (4,5,5,4). This, I think, looks great; they look like two ranks of cavalry on the move, but only a third of the figures of each unit are actually based (on the same stand as the 'front' rank) in that 'mixed up 2nd rank'. Cunning! 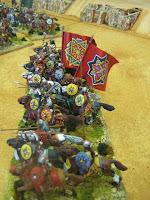 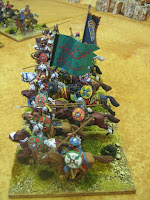 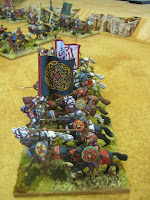 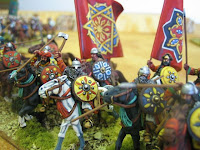 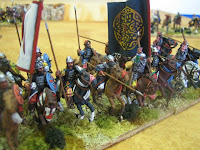 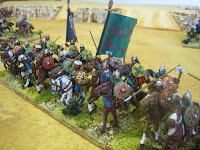 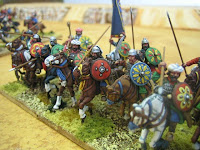 So what will the 'Saracen' army look like overall. Well I decided to collect a 'Syrian' and a 'Seljuk' army with mutually usable troops for fighting my Franks (see previous post), but with enough troops to fight amongst themselves with or without Frankish / Armenian allies. The combined force equates to:

The Armenians. (For use by any side.)

I almost have enough painted to play with now. First game in a month or so I reckon. I'm still on target for it all being done by Sheffield Triples in March 2009. That will be two years to the day to paint the lot.

Well done. I've been looking for examples of a Crusades era Arab army, nice to see one more example. Would you care to post some of the sources for your banners?

very good looking figures!!
i was doing some reading on crusader states) and found that the various crusader kingdoms would also fight amongst themselves and would often ally with different Saracen factions so you could have all kinds of combinations fighting each other

Beautiful work!
One boggles at the hours of dedication this must have required!
:)
Arthur