‘Arab’ buildings are probably the easiest buildings a war gamer can make. To show how easy, I will describe how I made the most recent addition to my growing town. It is probably hardest building to make; a mosque. You can judge the size of the mosque by the grid on the cutting mat. The squares are 1cm. The walls of the main mosque form a square, 11cm x 11cm. This makes the mosque much smaller than it would be in reality, but given war game ground scale, much bigger. It is a compromise; the important thing is that it looks right on the table, so all windows and doors must be figure scale.

Firstly, after deciding your measurements and drawing the basic wall elements on balsa wood sheet (4 - 5mm thick), cut out all of your bits using a sharp bladed craft knife. Remember, that unless you are going to miter all the walls (like a picture frame), and you want a square building like this one, you will need to take wall thickness into account by making two of the walls smaller than the other two by double the thickness of the walls. If you do this, measure windows from the centre of each wall so that everything looks balanced when it is put together.

I use a number 10 scalpel with 10A blades; because these are cheap: handles cost less than £5, and blades, sold foil packs of 5 blades, cost less than 20p each. 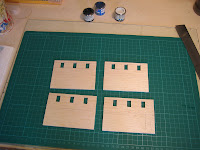 Next glue the walls together (I use thick PVA glue for this), adding balsa ‘right angle triangles’ on the inside for rigidity and ‘true 90 degree angles’, and pin. It is probably worth noting that I also use a cutting mat with a grid printed on it – just to check that everything is square. Once dry glue on the roof. I decided that this roof would overlap the walls by 1.5mm on each side. Once on, I drew lines, diagonally, from one corner to its opposite corner (the reason will become apparent) 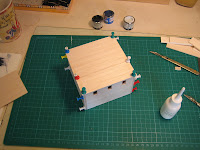 Next, glue on the dome, and then the parapet. This is where the diagonal lines come in handy. Measure the visible line to the edge of the dome at each corner; when they are all the same the dome is central. The dome is a 70mm polystyrene ball obtained from a craft shop. 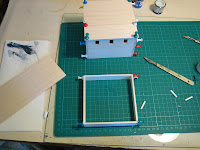 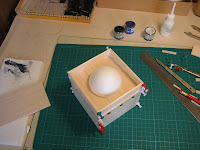 The walls of this mosque will be plastered. To give it the well worn look some of the plaster will be made to look like it has fallen off to reveal the brick work beneath. Cut a line around an area then ‘chisel’ out the area with a scalpel. Using a pencil with the grain of the wood and a scalpel against the grain, make the brick work. 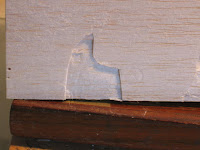 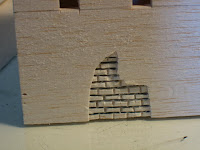 Next add the door. Being a ‘posh’ building I decided to add an ornamental stone arch behind it –all constructed out of balsa. The door itself was made out of thin balsa sheet scored with a pencil to make the planking effect. At this stage I also added some wide steps to the buildings entrance with a fountain and pool to one side (where the faithful can wash their feet). 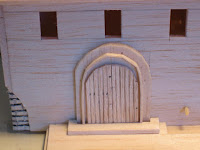 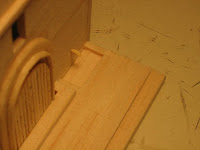 Now I added a tower where the Mullah, mad or otherwise, could call his congregation to prayer.
This was constructed using the same methods as the building. 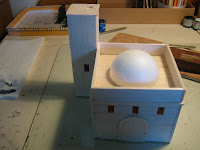 I crested my tower with a bottle top supported by square section balsa dowel (if I had had some I would have, in retrospect, used round dowel). To all intents and purposes, the construction phase is complete except for a crescent on the dome. This was fashioned from a shield, wire and a ball of miliput.

When the whole thing was dry I painted the inside black with ink. I glued the building onto a hardboard base, painted the door and brickwork with brown ink, and painted the outside walls, taking care around the brickwork, with a coating of filler. The filler should be a creamy constituency; I mix my filler with water and PVA glue. 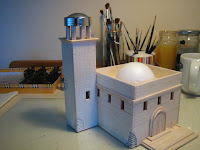 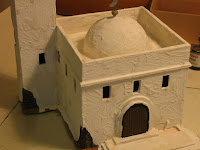 After dry brushing the brickwork and door in lighter shades of brown, I painted the rest of the building with magnolia household emulsion paint with a bit of brown and black ink mixed in. The resultant shade is a mucky brown grey colour. 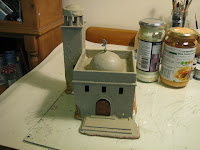 Next, the building was dry brushed with magnolia emulsion, and the crescent and water pool were painted with enamels. The base was finished in a similar way to my figures (see previous post under modeling). All done – One mosque! 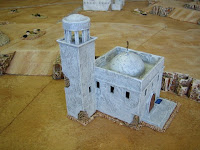 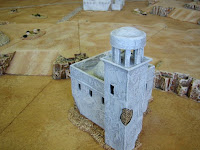 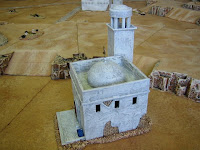 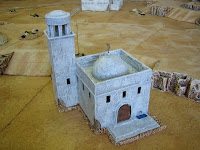 I like it. I tend to use foamcore for walls instead of balsa . . . but I can see some uses for balsa as you use it.

Great little tutorial and lovely finished product. I prefer balsa to foamcore myself..