This is the second version of this scenario. The first can be found here. This version features several changes to the terrain, forces and special scenario rules. It also, following a good deal of reading, has far more comprehensive historical background notes.

A Brief Historical Background To The Battle


Following the Spanish victory at the Battle of Cerignola in April 1503 the French retreated to their base at Gaeta. The Spanish, led by Gonsalvo de Corboba, followed up and laid siege but to little avail.

When French reinforcements arrived Gonsalvo fell back, in stages, until in late October the armies were facing each other again, close to the coast, on the Via Appia, with the swollen river Garigliano between them.

Where the Via Appia crosses the river there had once been a solid stone bridge but this had collapsed in the Dark Ages and had been replaced by a ferry. Gonsalvo de Cordoba, expected the French to try to force a crossing so he ordered a trench to be dug across the water meadows facing the ferry point. The weather was appallingly wet and 'water answered the spade': the trench immediately filled with water and the mud rampart could only be kept up with the use of fascines and gabions. The only benefit of the weather was that the river was in full spate and the ferry was barely usable.

Just as Gonsalvo de Cordoba had expected, the French commander, the Marquis of Mantua ordered a crossing. On the 6th of November the French built a makeshift bridge across the river using beams, barrels and some small boats and began to push troops across. When about a thousand had reached the Spanish bank Gonsalvo ordered his men to sally from their entrenchment and force the French back. A fierce struggle ensued at the waters edge. Finally the head of the French column was thrown back, its men recoiling back across the bridge or drowning in the swirling waters. The Spanish rendered the makeshift bridge unusable.


But the Marquis was not a man to accept the set back. He ordered that big ship's boats should be brought down the coast from Gaeta then sailed upstream to the ferry point. Here they would be joined together to form a much stronger, wider bridge. As soon a crossing was practicable, work parties went across the river and erected a palisade to protect the bridgehead whilst the bridge was completed behind it. The whole operation was carried out under the cover of French heavy guns which prevented interference from the Spanish.

Over the next few days the French attacked out from their bridgehead three times, but each time they were repulsed at the Spanish earthworks. All the time the weather worsened and, in mid November, the Marquis ordered offensive operations should cease until the weather improved. For the next six weeks there was a stalemate in conditions that resembled the trenches of World War 1. Men stood picket up to their knees in mud; the men were never dry; morale began to suffer.

However, one difference between the two armies was apparent. Whereas Gonsalvo, by personal example, kept his men at their posts and in good discipline, the French fell into indiscipline to the point of near mutiny. Fearing for his safety, the Marquis of Mantua came down with a fever politic, handed command to Ludovico the Marquis of Saluzzo, and went home. Slowly, the French army was pulled back away from the river, dispersing to better billets on higher and drier ground. The French cavalry, its horses suffering particularly badly, was withdrawn to seek forage and shelter as far away as Formia.

Meanwhile the Spanish position was improving: the whole Orsini faction, some 6000 men including 400 lances and 1000 light horse, having been spurned by the French, had come over to the Spanish. Gonsalvo now had an army of respectable size and with it he planned to take advantage of the French dispersal with a surprise river crossing that would outflank the French position. Under the supervision of the talented engineer Pedro Navarro a special bridge of boats was secretly constructed, flat pack style, at the Fortress of Modragone 15 miles behind the Spanish lines.

After arranging a Christmas truce for 25th and 26th of December, Gonsalvo set his plan into motion. On the nights of 27 - 28th of December, whilst the French were still celebrating, Gonsalvo began to shift his best troops and his bridging train up stream to the extreme left flank of French line at Sujo. Like everything else in Gonsalvo's plan, the bridging point at Sujo had been specially chosen. Here the ground was less wet and one bank did not command the other.

Gonsalvo's plan was simple. He would destroy the troops of the French left flank and then advance westward, via each of the French cantonments in turn, to Formia. Here, where the mountains came almost down to the sea, he hoped to cut off any French retreat. If his attack against the French left was showing signs of success, the large force he had left to hold the French at the French bridge was to attack over it in his support - a crippling right hook would be quickly followed by a shattering left uppercut.

For setting up this battle I used several sources but, the three main sources were:
Most of the accounts I have for the background to the battle tally, at least for the most part. However, when it comes to the disposition of the forces, and their composition in some instances, hardly anything tallies. For instance, I have the Italians with Gonsalvo or defending at the French bridge, and a similar thing for the Landsknechts with a third option of no presence at all. I also have Spanish infantry in both places. At Sujo, I have French infantry being surprised - either pike or crossbowmen - or light cavalry cavalry being surprised.

This divergence of sources gives me two options: first, to go with one source, or second, to cobble something together using them all. In the first version of this scenario I went with Sides but in the this version, partly in an attempt to create a balanced scenario that includes Gonsalvo's Landsknechts, I have chosen the second option. In doing so I will probably only succeed in pleasing myself but, as no one else seems to agree, why should I worry about that? 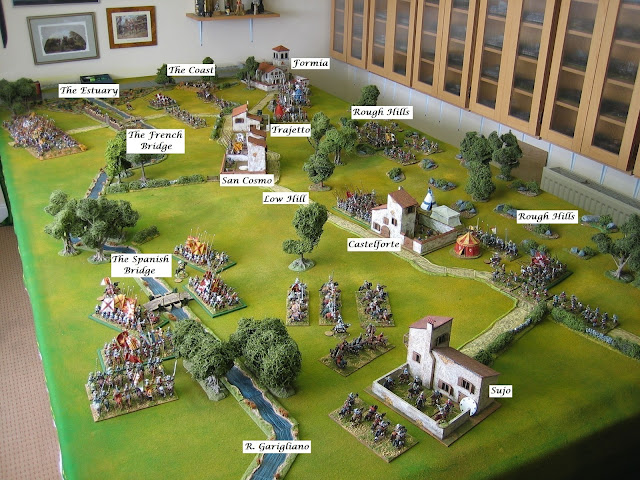 For the basis of the terrain set up I am still indebted to Peter Sides scenario book. Although my table is not an exact reproduction of his table plan (it features one or two elements from my other sources including Google Earth, and omits the village of Torre del Garigliano), it is unmistakably his basic table design. Groundscale is not at all accurate - the field was five miles wide - the French Bridge to Sujo - and Formia is actually ten miles from the French bridge. However, all are key elements to the scenario so all must be on table and, it is my general opinion that ground scale is rarely worth bothering with in any event, so on with the GAME. 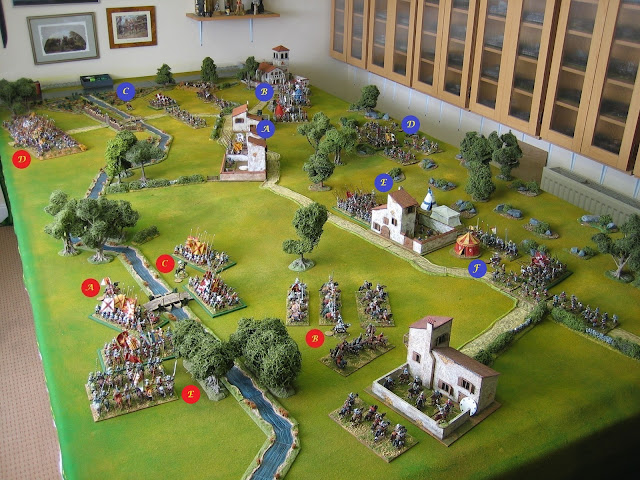 * Note: French command rating change at the end of each turn. This represents the time taken for news of Gonsalvo's attack to travel  / the surprise factor / state of readiness (see Special Scenario Notes). 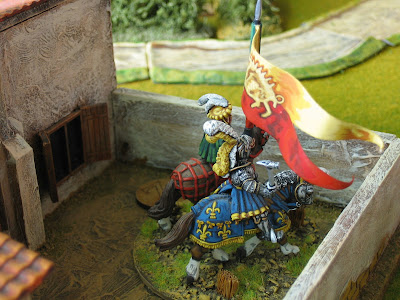 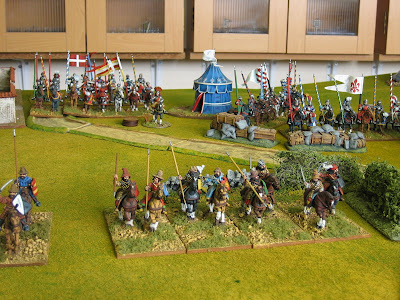 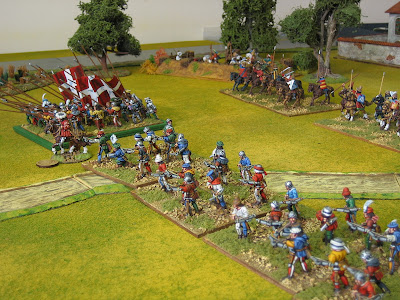 
Note: Piero was actually in command of the bridge itself - he fell off it and was drowned when Andrada attacked. 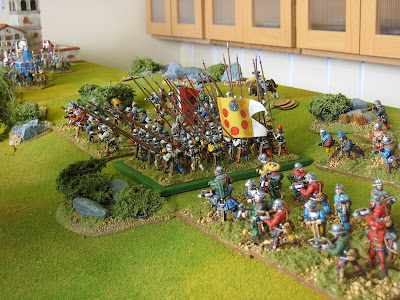 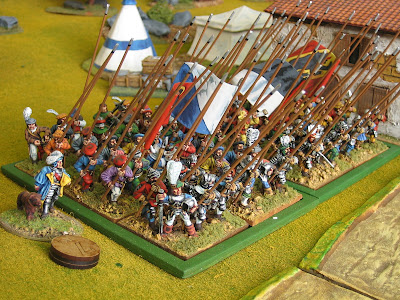 At Castelforte:
At San Cosmo:

Note: the command rating stack using chits for To The Strongest. 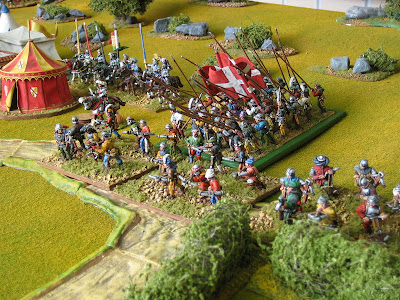 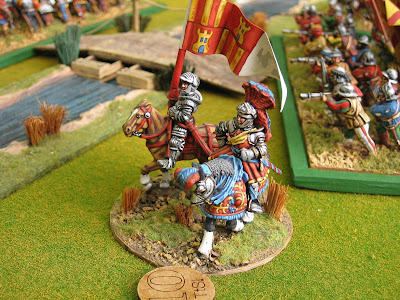 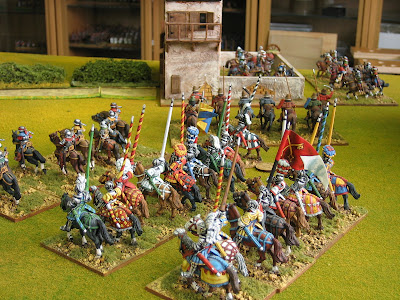 
Note the unit of French cavalry surrounded in Saluzzo - surprised in their beds. 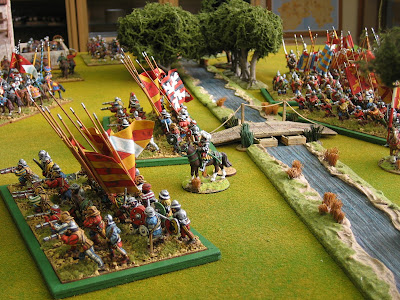 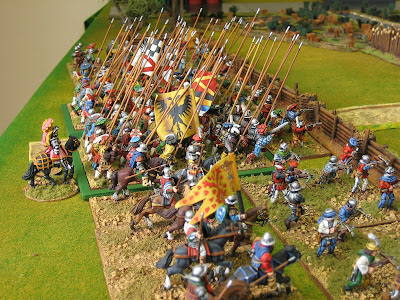 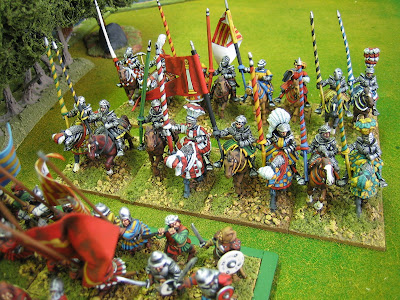 E: Diego de Mendoza - Command rating 8.
Graham and I will try this new scenario on Wednesday night. Following the game using version 1 of this scenario, we will use the broken battalia rules from Hail Caesar.

Apart from the two units in d'Algre's battalia all units are as defined in my Pike and Shotte unit characterisation table.

Morale boost: On taking the villages (unoccupied villages need only be contacted) the Spanish will receive stamina points. These represent the morale boost of being victorious. They can be stored and assigned to units which have lost stamina previously in the game at the end of any Spanish player's turn, as he wishes. Units may be brought back up to full strength. I have marked these (for game ease) by placing poker chips in each of the villages.


French command penalty:
To reflect the element of surprise and the time it would take for news of the attack to travel across the field I have used the simple expedient of temporarily reducing the command ratings of some commanders at the start of the game. For ease of play I have placed a stack of To The Strongest chits by each French commander. At the end of each French turn a chit is removed from the stack until only one is left. Example: On turn one, the Swiss captain has a stack of three chits, the first shows a command rating of 7; at the end of the first turn the 7 is removed, in this case revealing another 7 for turn two; at the end of the second turn this chit is removed revealing a command rating of 8 for turn three and all subsequent turns.

Any other result, including a disputed victory (where both players can claim it), is a draw.

First class. I look forward to hearing how the game played.

As well as everything else being splendid, I love the way the overall battle shot has been labelled, especially the script used - very nicely executed.

Wonderful info on the scenario and really look forward to reading the AAR.

I recognized the account, which does a lot to set the scene for this very modern style operation. I'm looking forward to the re-fight!