I have chosen the title for this post with some thought. The project is finished, my lead pile is no more but, the army isn't quite finished. I will need to add a unit of Chasseurs a Cheval and I still have room on the French shelves for four more units of infantry - probably two units of line and two of legere. However, given the existing infantry footprint, the extra infantry would almost certainly be surplus to requirements.

Having got that off my chest, let's get on to the review the army on parade. I'll just put my painting arm inside the front of my coat and.... 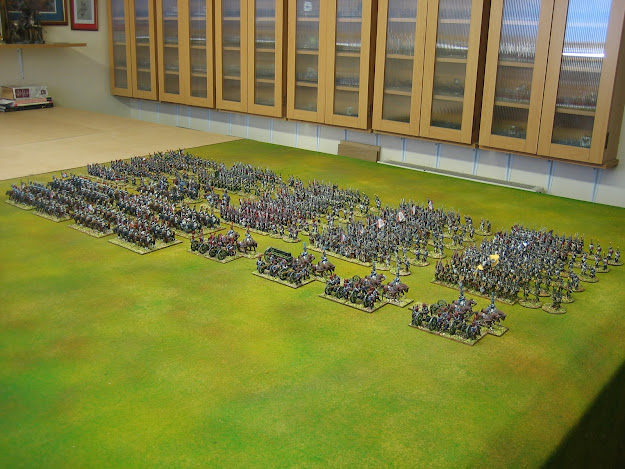 Here are the French, all painted and based. In total there are thirty eight units. It's the first time I've had them all out together and, to be frank, I was surprised by their footprint. Paraded on a frontage of just short of six feet, they take up a pretty big area. There are more than enough figures to play with on a table the size of mine.
All figures are Front Rank 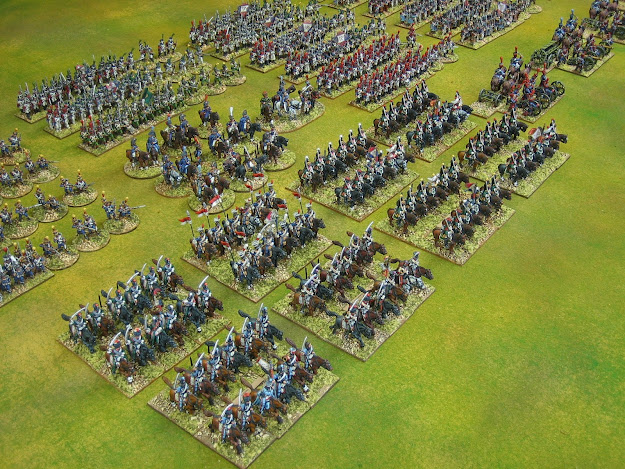 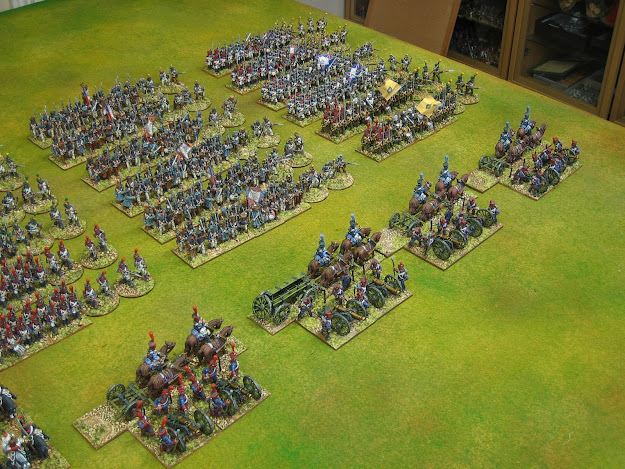 There are four batteries of two guns (three foot and one horse).  There are four limbers, one per battery.
This, given that a division was normally allotted only one battery, is more than enough guns for Peninsular games. When playing multiple division games at a scale of one infantry unit per 1000 men, one gun is nearer to the correct frontage than two guns so, again this is more than enough artillery. 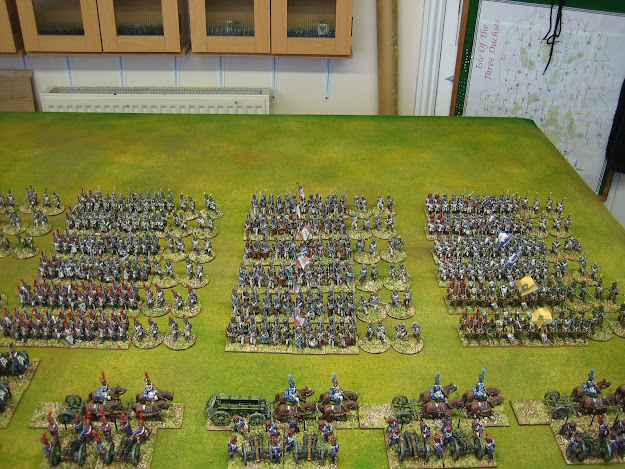 Here are the eighteen units of line infantry.
There are 12 battalions of French infantry and six battalions of foreign infantry. Each unit is twenty four figures strong on four stands, and each unit has an additional two stands of two skirmishers on round bases. All basing is 45mm x 45mm or 45mm diameter.
The French line units comprise two battalions each of the 27th, 36th, 39th, 50th, 1st Paris Municipal Guard (in white coats) and two units of reserve grenadiers. I'm counting the grenadiers as line units because, in extremis, they could stand in as such.
The foreign line units comprise two battalions each of 4th Swiss, 4th Vistula and 2nd Nassau. This mix was chosen for colour alone and it's a decision I'm more than happy with. 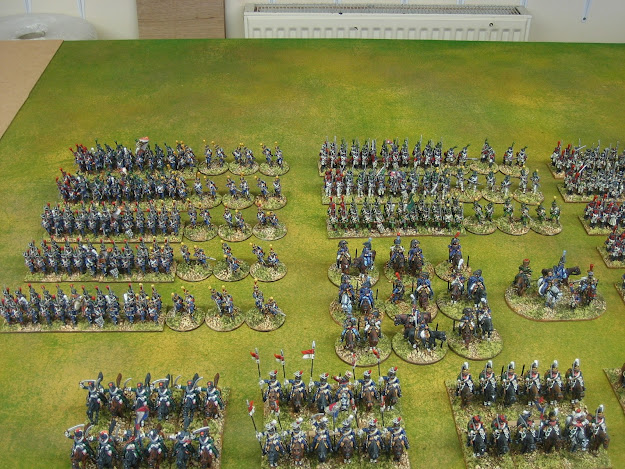 There are eight units of light infantry; five are French and three are foreign. These units are based as per the line infantry except that each has an extra stand of skirmishers (30 figures each in total) and those posed in firing line are on bases 60mm deep to prevent 'figure clash'.
The French legere comprise three battalions of the 2nd and two of the 4th (the latter in firing line pose).
The foreign legere, again chosen for colour, comprise one battalion each of the Legion Du Midi, Regiment Irlandais and Legion Hannovrienne.
Also pictured here are the army's C-in-C stand, eight 'divisional' command stands, and a singly based officer of engineers (for scenarios requiring one - bridge demolition, pontoon bridge ops, etc.). The C-in-C is based on a 120mm x 75mm pill box shape; the others are 60mm diameter. 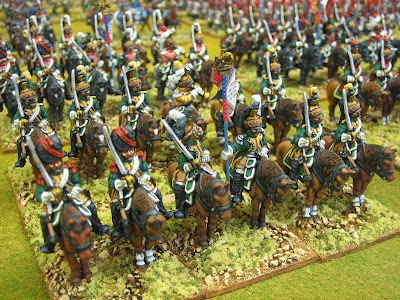 Of the four new cavalry units present are the 20th Dragoons with their yellow facings (and behind them the 15th with pink facings) which look very fetching. 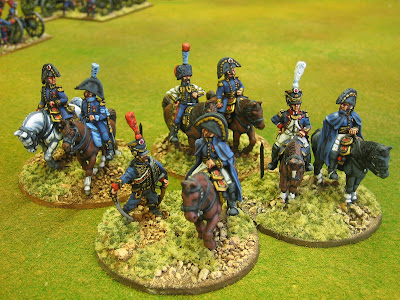 Among the new command stands there are these resplendent fellows. 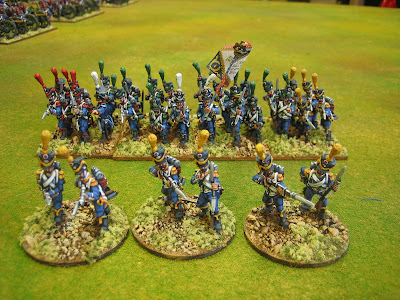 Among the eight new units of infantry figures are these of the 4th legere. If I were buying again, I would not go for the firing line poses. I much prefer the square basing of the marching line units. 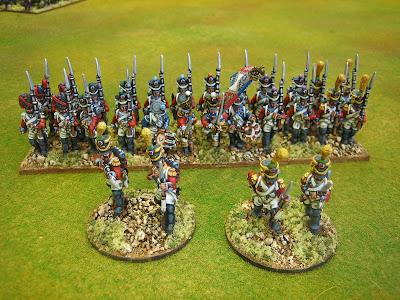 The Swiss look fantastic in their red coats with sky blue facings, and the elite company distinctions are excellent. The 4th regiment's grenadier bearskins did not have brass front plates so I had to cover them over with Milliput prior to painting. 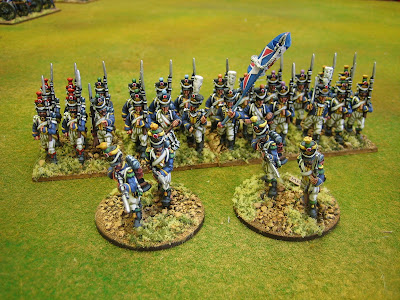 Blue and yellow is also one of my favourite combinations of colours. That being the case Poles of the Vistula legion were a must.
There were many variations of uniform description in the available sources for this unit. I went with the most striking: The white epaulettes on the grenadier uniforms only appeared in pictures but looked too distinctive to miss out on.
These are of the 4th Vistula Regiment.
Gonsalvo's blog was very useful here. 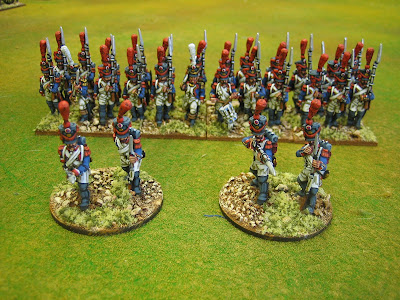 Units of converged grenadier companies appear in quite a few notable OOB and for that reason I chose to include two units in mine. As well as looking brightly coloured, with plumes galore, they can serve as ordinary line infantry if I run out of genuine line units.
There was much debate on the inclusion of grenadier skirmish stands but, in the end, I did them so they could double up as line infantry units. 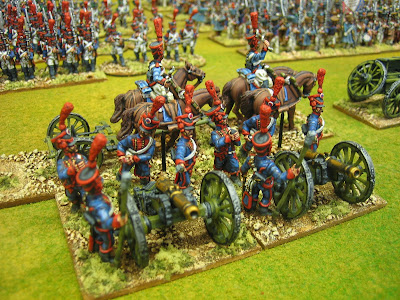 Although the horse artillery isn't a new unit, this is a picture of them fully based up and they look even better now. Again, the colour of them is splendid. 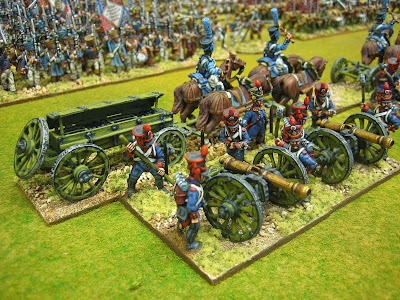 Finally, a picture of the newest artillery unit with its caisson. French artillery caissons are fantastic (this one modelled with an open 'pinned lid') as the front is a Gribeauval limber. The caisson is not glued on so it can be taken off, leaving the front wheeled limber section, to be used as a normal limber if the guns need to move.
If I had thought about this before purchasing my limbers I would have bought two as they can also be used as baggage train elements - anything that counts as a wargaming 'double bubble' gets my vote! 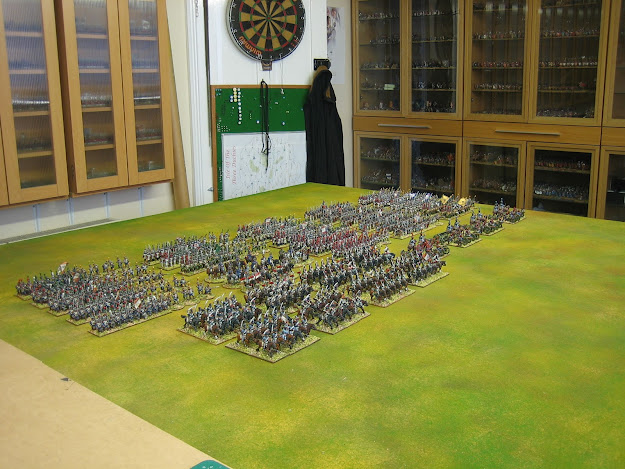 So, what is the total head count? It's this:
All in all I'm very happy with this lot but, I'm glad they are done and behind me now. I still have fourteen units of British left to do to finish the other half of the Peninsular project. I suppose I'll get onto them next but not for a while, I have a shed load of commissions to plough through first.

Wow! Great work! I just got started on my first 28mm Napoleonics (British Peninsula War British). How long did it take you to paint up this wonderful French army?

I am in absolute awe to what you have accomplished and envious. Superbly painted and based figures. Thank you for sharing your efforts on TMP.

Terrrific, a collection you can be very happy with that's for sure!

I bought the bulk of the figures for this and an Anglo Portuguese army back in 2015 - the package weighed in at 28 Kg (over 60 lbs) and has to be the heaviest single order of lead I've ever purchased. So five years to paint this lot plus 25 units of 'Brits'. There have been a few long breaks, of 6 months each, at a guess, along the way, so about three years in reality. I struggled a lot at the start of the project because it was taking so long to paint enough of both sides to get started, then I got side tracked. Since March I've painted about two dozen units. My aim is to get the remaining 14 units of Brits done by Christmas - I can paint two units a week for myself if I have a mind to do it.

They look absolutely superb! Bravo on getting to this landmark in your collection.

Wow... I have a French army around a third of this size and I thought that was something. Well done!

2 units in a week! Now I'm jealous of your army AND your painting speed! But very motivating, cheers!

Wow, what a superb looking army

What a splendid and inspirational sight!

Well done James, as expected they are beautiful and very very impressive.

Well done James. Absolutely beautiful as is to be expected from yourself.

Oh, so well done. Getting through something this large is always an accomplishment.

Fantastic achievement James. They look quite superb, Painting two units a week is a staggering pace. You should patent your formula and market it 😁

They look super, James. Since the presence of the Guard in Spain was fleeting, I think you chose well to have a couple of un its of converged grenadiers.

I rather like a few units in the "Firing" pose myself

These are fantastic! As ever, this has been a huge inspiration to my own modest painting efforts, I'm currently at less than 10% of your total for my French - but on the plus side I have managed to persuade a handful of mates to deep a toe (well, maybe more than a toe, you know how wargamers are :) ) into the Napoleonic waters. If only they hadn't all chosen to go for Brits!

Congrats on a major milestone! Everything looks absolutely top notch!