Do you remember these 18th Century limbers?

In the summer of 2019 I made up some limbers, using converted Gribeauval limbers by Warbases, for my SYW collection. I painted them natural wood: They didn't look right, so I didn't post anything.

I decided to buy some more and paint them up in national colours - Prussian blue; Austrian ochre; Russian red. Then, once done, I posted about them in March 2020.

In the interim, I had taken one of the converted limbers to Fiasco, to show Martin  at the Warbases stand. He was interested enough to take a couple of pics. I picked up some more Gribeauval limbers, plus some windows and doors from him, and that was that.

Then, last year (mid-summer?), I received a packet from Warbases with this addition to the Warbases catalogue. 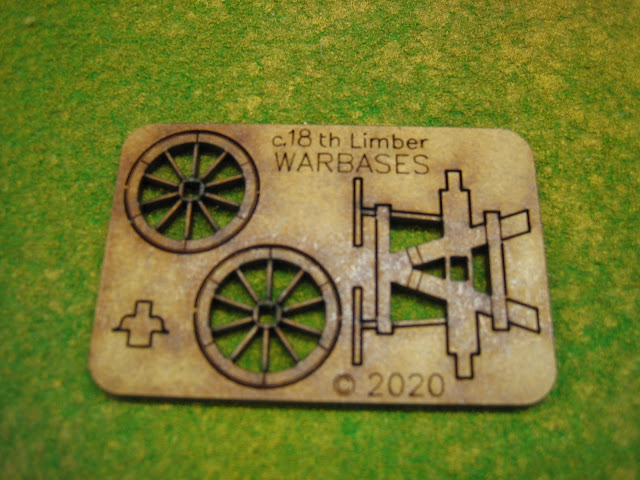 Unfortunately, after it arrived, I put it away and promptly forgot where. I came across it yesterday and thought I'd better do this much belated post.

I'm not sure it appears in the WB catalogue, at least I can't find it. But, for those who might wish to skip the conversion stage, Martin does have the pattern for some simple 18C limbers. He's always very approachable, so drop him an email if you want some. I'm sure he'll come back with a reasonable price to cut them for you - he's already done the donkey work.

EDIT: Martin has been in touch to say that the "c.18th Limber", as pictured above, will be listed on the Warbases web site soon. They will be priced at £1.20 each.

Email ThisBlogThis!Share to TwitterShare to FacebookShare to Pinterest
Labels: 18C, Modelling and conversions.

Nice paintwork as ever!
all your Napoleonics are absolutly fabulous!
congratulations!

These are brilliant James!