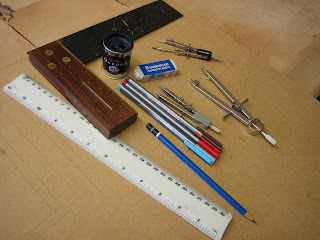 This stream was made for grid based games using To the Strongest rules so the shape and size of things was determined by the grid in this case. However, basic principles apply, etc.
Marking out the sections is very important and I used several pieces of kit to accomplish this.
The ruler and pencil are the only essential tools required but, everything else makes the job easier. The set square speeds up the process and obviously allows true right angles to be marked. The compasses are all pre-set at the three radius required to mark out the turn sections, again I'm using three to speed up the process. I tend to use a lot of coloured pens to mark things out so that when I'm cutting I cut along the right lines - I've made mistakes often enough to know that this is worth while. 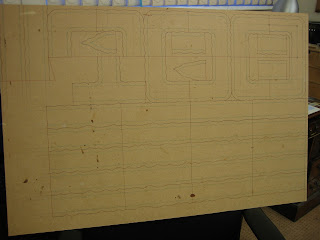 This is a two foot by three foot piece of MDF, 2mm thick.
It's been marked out with all of the sections I think I might need. Twenty two straights; ten 90 degree bends; three half length ends; two stream sources; one T junction for doing a fork / tributary.
The important measurement for the bends was the centre line because each bend precisely covers the corner and half a side's length of a square - being a bear of little brain I even marked this out once to make sure (bend section top right). The straight sections are 200mm long - a square's side.
Red lines are the straight cuts which I'll make with a Stanley knife and a steel rule. Short of buying a laser cutter, I think this is the best way to cut straight lines through 2mm MDF. A couple of gentle guiding strokes to start, followed by three or four heavy strokes is usually enough to get through it.
The black lines are where I'll cut with a coping or fret saw. Note that I have drawn the wavy black lines so that one cut makes two wavy banks. For cutting wavy lines, a coping saw is an essential tool; the fret saw is a nice to have for particularly 'deep into the sheet' cuts, and it rarely sees the light of day.
The light blue line is a guide line for the rivers surface, and in this case was probably superfluous. 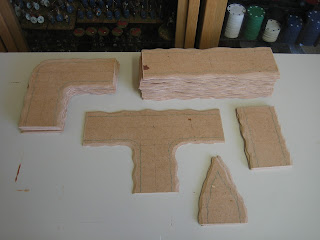 After cutting everything out, I chamfered the bank edges with a Stanley knife and then gave everything a good sanding with 180 grade glass paper.
The turns are set at 90 degrees because I'm primarily making the streams for To the Strongest games, where the streams run down the lines of the grid squares - i.e. between the squares.
Immediately after this was done I undercoated both sides of the sections with two coats of water based primer undercoat. Again, I'm not sure this was entirely necessary but it would be a shame if the sections ever got wet at some point in the future and warped. It's worth noting that the light blue pen line came through the undercoat. 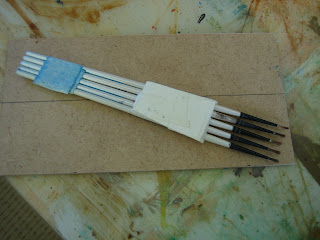 Next thing was to create the water's surface.
I made this simple tool to do this out of old paint brushes, a piece of card (to keep them flat) and masking tape. I used paint brushes because of the nicely rounded, hard, smooth handle ends.
This will be used to make lots of ripples, set at 90 degrees to the 'flow'. This is something that is counter intuitive but, when you look at the ripples in fast shallow streams this is the way the ripples run. So often I see wargame streams with ripples running with the current; I made them that way myself before taking time to look at ripples properly. 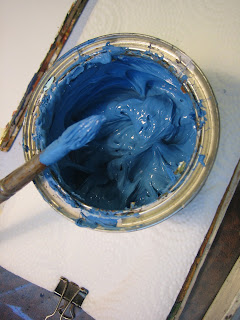 This picture shows why I made the new streams now. Whilst clearing out some cupboards and drawers a couple of weeks ago I came across two match pots (blue and grey) of paint that had become almost too thick to use. I mixed them together and got this very gooey mess. It's so thick it retains the shape you leave it in after mixing. 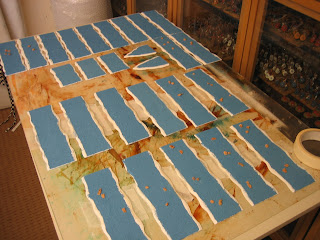 I put the paint onto the sections with the hog hair brush you can see in the previous shot. It wasn't put on that thick, certainly less than 1mm thick overall, then I textured the surface with the 'paint brush tool', washing the end of the tool (after doing each section) by dipping it into a jam jar of water and rubbing it with a big paint brush (that's why the lower masking tape has a blue hue).
I added model railway 'cork boulders' to half of the straight sections and to a few of the turns. 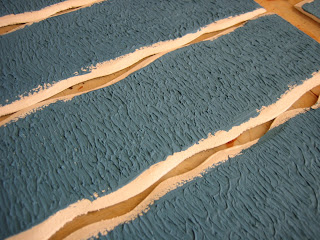 This shot shows how I did the surface more clearly. You can see I used short strokes rather than simply pulling the tool all the way across the stream. After doing the ripples I broke them up further with a stabbing motion, with the tool set at the direction of the ripples.
This shot also shows the base emulsion paint colour (left over from painting my teenage sons bedroom walls) that I used to paint the rivers - in reality it's even darker than it looks in this shot.
This was then dry brushed with various shades of blue. In fact they looked very blue at this point - I know what I'm doing, I have a trick up my sleeve. 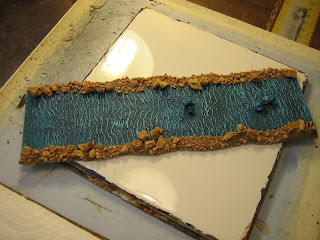 After dry brushing, I added the banks. This was simply done by sticking cork boulders, cat litter and sand to the edges of the river with PVA.
Note that I glued the boulders on first, then when dry, I painted a good thickness of PVA along the whole bank onto which I sprinkled cat litter, immediately followed by sand, followed by sand again a few minutes later.
Two things about the cat litter. Firstly this is the man made dust free pink stuff sold by Tesco. It doesn't disintegrate, or go mushy when wet. Secondly, I sprinkled it on holding the section at an angle so that a good pebbly bank was created at the water's edge.
When it was dry I painted the banks with Dulux Wholemeal Honey 1. This was then ink washed with diluted (4:1) burnt umber acrylic ink. When dry the banks and river rocks were dry brushed with sandier colours, then I did a final whip round picking out the edges of the big rocks and bigger stones - painting them properly. This final step might sound like overkill for terrain but it makes a big difference, and it's not like painting eyes; rough and ready highlighting is all that is required, 30 seconds a section tops. 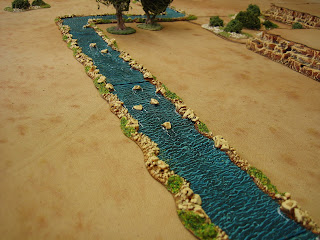 Trick time. After the banks were painted it was time to tone down the blue into the green spectrum (I think) by making the blue more of a dark aquamarine. This is done by mixing medium oak wood stain with yacht varnish. I mixed mine in a jam jar, about 20mm in the bottom of the jar with a tea spoon of stain. I actually put a label on the jam jar with the varnish level drawn on so I can repeat the mix in the future.
This was painted on quite thickly. You'll note it slightly, and nicely, darkened the bottom of the bank too. When this was dry I dotted some flecks of white 'foam' here and there with white enamel paint.
Last job, once the varnish was fully dry, was to add a small amount of green flock. 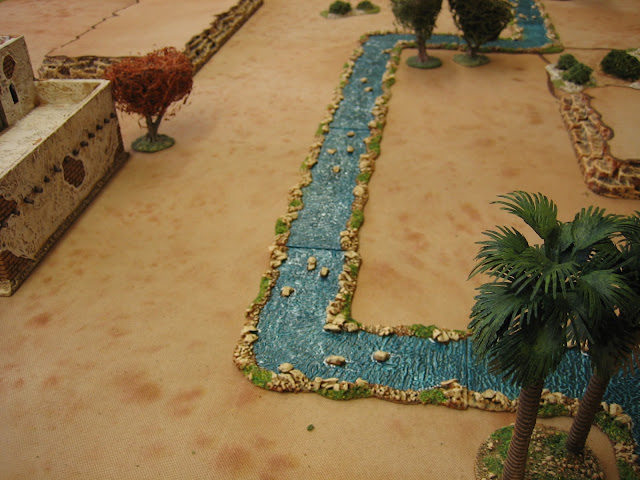 A shot of the stream taken from an angle that catches and reflects the light.
I'm pleased with how this came out: So pleased I'm planning on adding some less angular bends so that I can use it for games not based on a grid - like Peninsular and Italian Wars games where a stony banked stream might work quite well.
EDIT: I've done the extra bits of stream now too: Three more 10cm (half sections) sections, four 5cm (quarter) sections, eight 45 degree bends and four 22.5 degree bends. The bends are just simple short arcs. So now I can use this stream for just about everything.
One thing that often happens with light pieces of terrain is that they 'slip about' on the table when jogged whilst moving troops about. I've cured this by joining the sections together with a short piece of masking tape on the underside of each section's ends: Invisible, and works a treat.
at September 19, 2021

What is emulsion paint? Is it what we call acrylic paint in the USA?

Great work on the stream

Emulsion paint is household decorating paint. It is very similar to acrylic, and probably is one though we don't call it that here.

You can get it in any colour you want from 250 ml to 5 l. They can mix it to order in the DIY shop, even to match a the colour of anything you bring in if you want (they scan it to match the colour). I'm guessing you have a similar thing US side. The main company for it here is called Dulux. It's top end, high quality.

Nice tutorial, great idea on the ripple effect tool and also impressed that 2mm has produced a non-warp terrain piece, I have been pondering on this over the past couple of weeks. Thanks.

Very clever use of the qualities of paint and stain. The ripple detail is awesome. The color match is available in the states, 'sample' sizes are the smallest, yes acrylic is emulsions US equivalent.
Your savvy use of tools and devices warms my heart.

A lovely shade of blue-gray and some impressive modelling too.

Very effective James and nice to see how you went about making these:)

James,
Your grasp of the aesthetic and functionality is truly spectacular. I will definitely use your technique for my Bolt Action table. You could write a book on terrain you know...
Thanks,
Gunny

Your tutorial is descriptive yet to the point. I keep staring at a piece of MDF I have in my garage and wondering if isn't about time to put that thing to use!

Gunny, that kind of flattery will carry you far. Thank you.

Thank you all for your kind words.