Sometimes you can try to be too clever: Last week I ran the scenario as I'd set it out and, although the game was quite a good one, it was all done and dusted before the reserves had arrived and if the game had continued the reserves were so unbalanced as to make the game not worth continuing. However, I promised you a report and here it is. 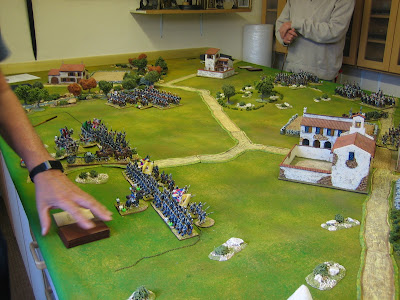 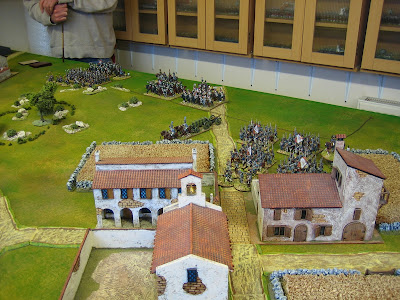 The French move towards the town of Poca Estavavan. 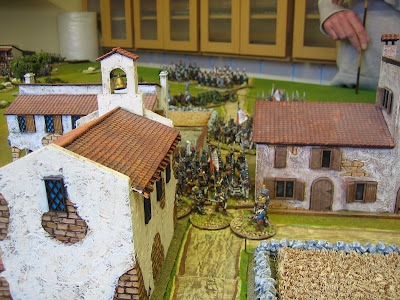 They arrive in strength and occupy it before the British can intervene. 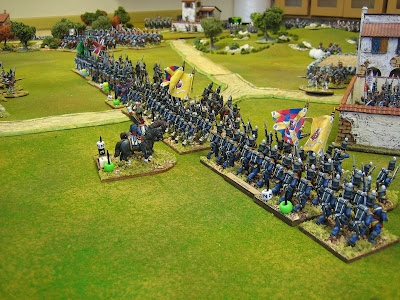 The British move to clear the town section by section, starting with the church section: The French hold out remarkably well and for almost the whole evening's play.
Mark employs his guns in counter-battery fire: This, in the long run, will unsettle the French position to the right of Poca Estevan and change the balance of the battle in what will prove to be a vital sector of the field. 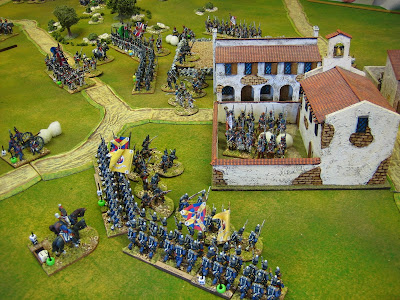 The British attack is developing nicely - the French are being outgunned in the village and the French battery, which has been shattered by the British guns, is about to be overrun. 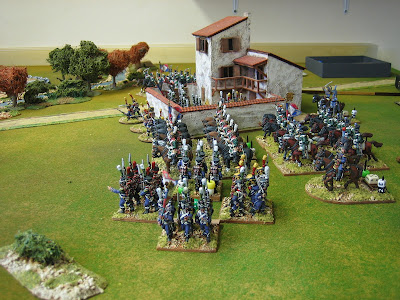 On the French right, the Legere occupy the farm and form square to nullify the British cavalry advance then, with these offering covering fire, they bring up their own cavalry. 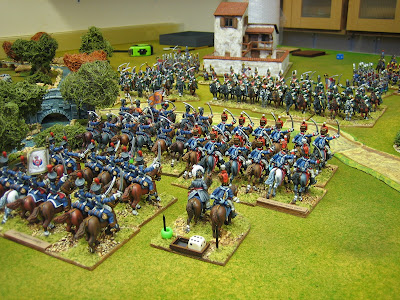 This shot was taken just prior to the glorious charge of the French cavalry that all but swept the British cavalry from the field. After this charge the French had the bridge and their cavalry had free roam of the field. 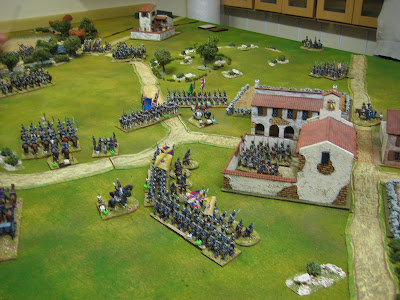 But, the village was about to fall to the British, and their infantry, guns, and (what remained of) the 10th Portuguese cavalry were able to swing to face the French cavalry which was moving to outflank them.
At this point, with the French in the village beaten, the French reserves started to arrive.
The French had drawn the cavalry reinforcements (envelope 3) and Graham felt, justifiably, that he had no way of retaking the village.
It was quite late in the evening at this point so, when Mark revealed he had drawn the Light Division (envelope 2) which was shortly to arrive at C (the bridge road) Graham conceded - the game was truly up. A resounding British win.
The game was a good one and both players had had their successes but, it had not gone as I'd hoped. The changes I had made to the original scenario, changes I thought would add more uncertainty and excitement to the game, didn't work as planned. Firstly, I got the timings wrong - the reserves should have arrived slightly (a turn) earlier. Secondly, the randomness of the reserves only served to make (by chance, and if the game had been continued) a British victory inevitable. Consequently, I've changed the scenario a little and will re-run it again this week: See my next post, later today. 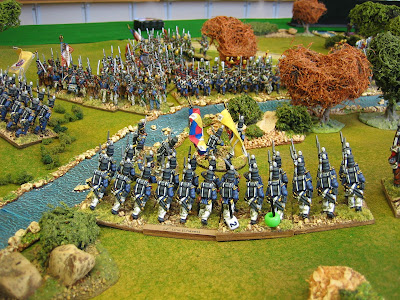