As I am making a push to finish the British I thought I'd get the difficult cavalry unit out of the way. 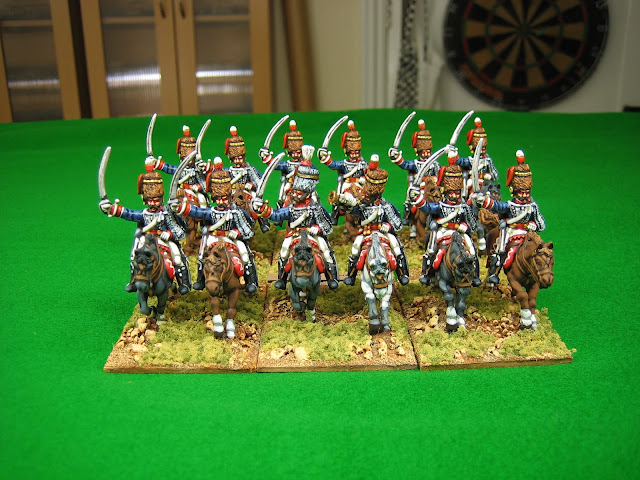 10th Prince of Wales Own Hussars (or are they?). 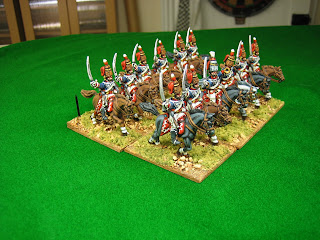 These figures are not my favourite Front Rank figures. I think the sculpts are quite old and the detail, which is very intricate, on things like palisse button loops and lace, doesn't quite suit my painting style. 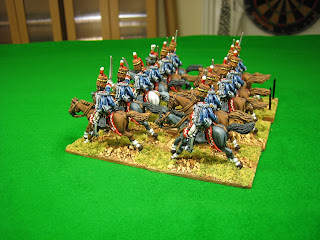 That said, I think they've come out okay. Very red white and blue, and one for the Brexiteers.
Note the distinctive grey fur cap of the officer, and the grey fur trim on the pelisses. 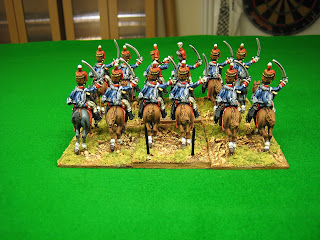 The six bases are 45mm x 60mm x 2mm MDF.
Two of the bases have a 7mm wide bar set at the back; one to hold the name plate; one to secure the two pins I use to hold command group ID and unit quality beads.
Consequently, these stands are slightly raised at the back; this construction is the same for all my units in this collection. It has allowed me to do something special with this unit because...... 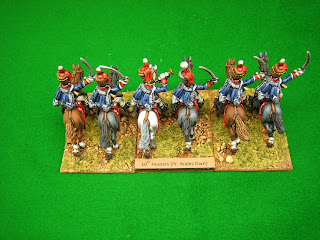 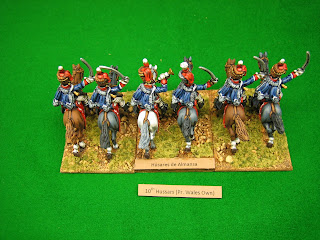 ....the Spanish Husares de Almansa regiment raised by General Whittingham (in Spanish Service) in 1810 and uniformed, it is said, in the uniform of the British 10th Hussars supplied by Britain.
How EU friendly is that!
However, it does seem that there may have been significant differences in the uniform so a bit of imagination will be needed to make the change.
I've seen two modern pictures of the Husares de Almansa (sources unknown) and both show the uniform of the 10th with the following differences: Black fur caps for all ranks; white fur edged pelisses.
The differences, especially in cap colour is striking but, as you know, I like a bit of fudge. 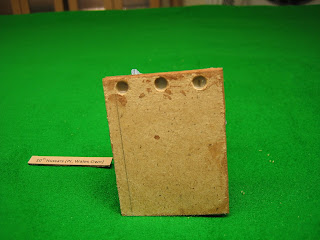 I've used a magnetic strip for the 10th Hussar's name plate whilst that for the Husares de Almansa is  stuck onto the base atop a piece of thin steel sheet.
To increase the magnetism of the steel sheet, I've set three small earth magnets into the name bar below it. This seems to add quite a lot of magnetic pull.
I had to think hard before deciding to which name plate to make removable. In the end it came down to this: The unit will most commonly be British and stored as such, so to keep the plate in place and magnetised for most of the time (especially when in storage) that name is the removable one.
Next up, an infantry unit: The Brunswick Oels. Then just two more to go!
at November 20, 2021

A most handsome unit, James, no matter what name plate they bear!

The 10th doubling as the Spanish 'Husares (or dragones) de Almanza', heresy I say heresy! I am just teasing a bit; these are wonderfully painted hussars in your very unique style.

It was an interesting dilemma that I will be facing in the future as I slowly build my eastern peninsular armies for Castalla.

Thanks for sharing your excellent photos via TMP.

The older figures definitely have their own charm.