The British and French are done!

Now it's time to begin work on my 'mid war' Spanish army. They have been a long time coming. Indeed, I purchased them in October last year and until last month did little more than sort out officer groups and add the skirmishers to the infantry bags. 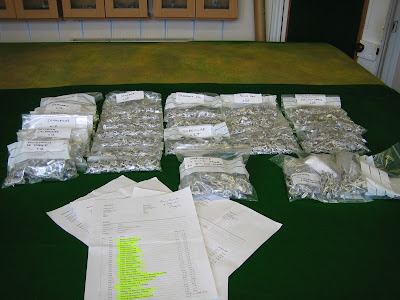 The Spanish army is about a third smaller than the French and British army, numbering twenty three infantry units (including three guerrilla units), six cavalry units, five guns, three limbers and seven officer stands: The lower numbers, combined with the fact that its one army to paint not two, should enable painting to progress reasonably quickly.

I've made a start by painting four units in what was termed the 'British Uniform'. These I've named Jaen, Victoria, Union and Bailen. These all served with Morillo's Division as part of Wellington's forces at Vittoria: Quite a versatile Spanish contingent.

Edit: Since posting I've been informed by Mighty Owl that Bailen was not with Morillo's Division at Vittoria and the Wiki OOB for Vittoria is wrong in this respect. I will paint up Tiradores de Doyle (actually not featured in the Wiki OOB) instead. Thanks to Bill Slavin for providing a picture of Tiradores de Doyle reenactors in British Uniform. Bailen will remain Bailen as it fulfils the prime directive: It fought in theatre (Spain) between 1809 and 1813. 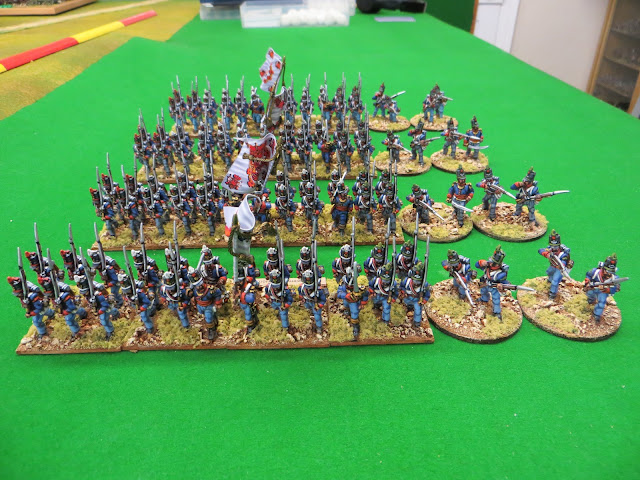 All figures are by Front Rank. All were painted by me in enamels. Flags are by Adolfo Ramos. Round bases are by War Bases, others are home cut - they are all 45mm. Each unit is 24 figures with four extra skirmishers.

Trousers were officially light blue but often they were not. I've painted two with mid blue trousers, two with grey trousers. 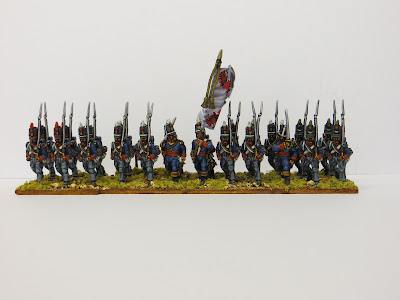 When it comes to flags for the Spanish I'm afraid it's generally a case of best guess / most suitable. I've chosen to flag mine with flags from their region - mostly. I like the Adolfo Ramos flags (because he offers more choice than GMB, and cavalry guidons). They are clearly printed, have bold colours and are quite darkly shaded: Truth be known, they probably go with my paining style! 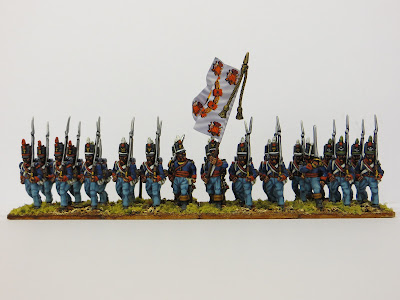 I've chosen to paint my Spanish with well tanned flesh. In reality, of course, all Peninsular troops should probably be well tanned but I chose to paint my French and British with a more northerly, paler skin tone. 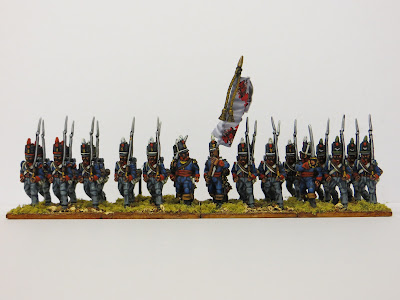 All these Front Rank infantry units were bought as unit packs. These packs come with two standard bearers as standard so an extra figure was bought to replace the second.
Quite early on, most units were officially reduced to one standard per battalion. Later, at least for some units, this was increased back to two.
Not all units were equipped with a standard from their region, many taking any old spare flags (created by the reduction) from the churches in which they were stored. As with most things Spanish (in this period) it all gets very confusing. 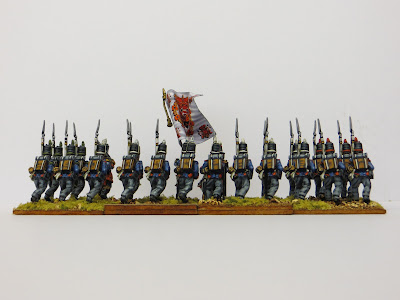 The rear view of these troops is quite good. Unlike other uniform styles provided by Front Rank these come with 'full equipment'.
With the extra equipment making them more laborious to paint than the other types of unit, it's best to get them done early - whilst the will to paint (at the start of a project) is at its highest: There are another five units in this uniform style to paint, then onto the easy ones. 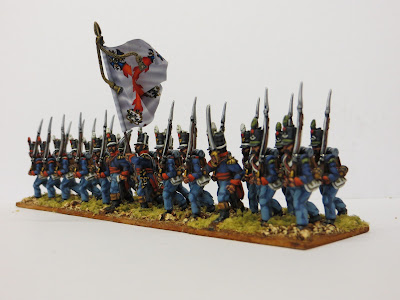 I think the pose - seemingly marching with purpose - is a good one. I like these units. 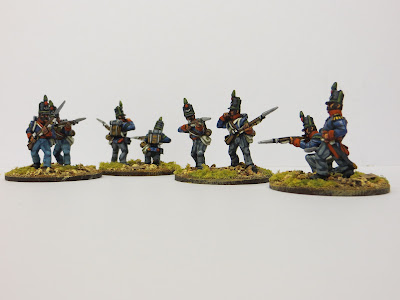 Each unit will have two skirmish stands. Too many? Perhaps. 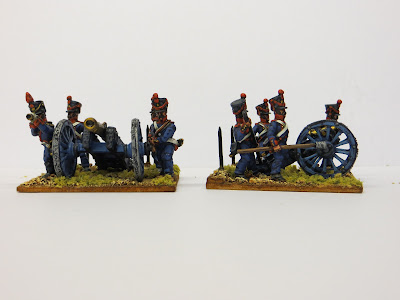 Foot artillery (1812 uniform) in shako. An 8pdr gun and a howitzer.
Home grown Spanish guns were mounted on  French, Gribeauval designed carriages, painted blue. Two of my guns will be British supplied pieces. 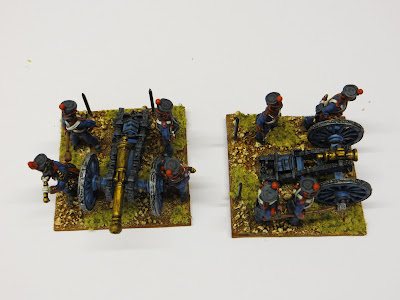 It's a pity all of the Peninsular artillery crew are dressed in blue - British, French and Spanish - but it is what it is. 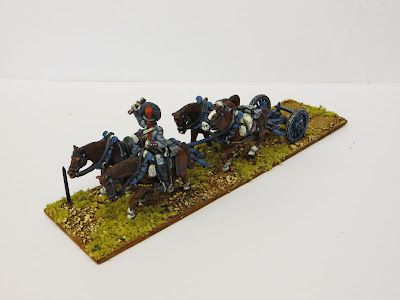 I've used a French limber for these guns, converting the (French) driver with a head swap to wear a tarleton/ Bavarian style helmet.
This splendid grey driver uniform, as close as was practical to convert to, is dated to 1813 (Osprey). In reality the leg / footwear should be short gaiters and shoes but, my guy has acquired some cavalry boots at some point on his travels. 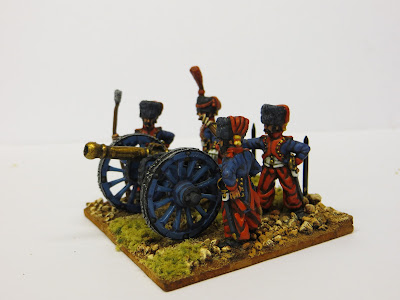 Unlike the French and British, which were painted straight out of the bags, some of the Spanish figures will involve quite a lot of conversion.
The artillery is the first stuff that required such work (the driver above was the first piece).
This crew was the second. They were all converted from 1808 crew wearing bicorns and high gaiters. Now they wear a bearskin and mameluke style trousers. 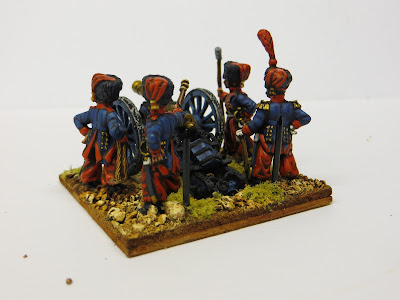 The heads and bearskins are from Nassau grenadiers and a Nassau officer; the trousers were added using thin 'sheets' of Milliput applied with a scalpel, suitably rounded off and creased with a large pin.
One fellow has a full beard because I accidentally chopped his chin off during decapitation. 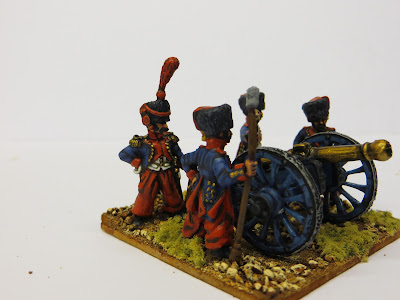 It's such a colourful uniform I had to have it in my army.
I took the basis of the uniform from a contemporary print in one of the Osprey books. The print is captioned:
"Horse artillery officer c.1812-1815; the exact unit is unidentified."
Now, that's a description to warm the heart of anyone muddling through! 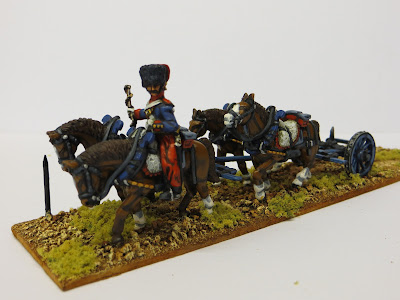 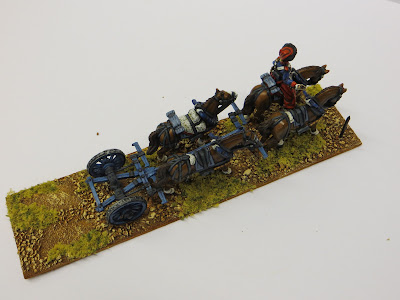 I really like this battery. Rare it may have been but, I can see it featuring a lot in my own OOBs. 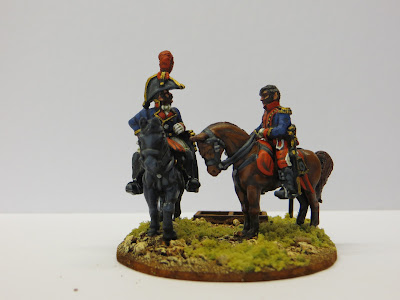 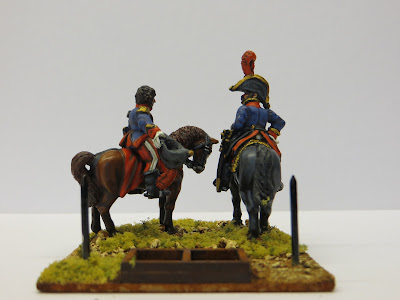 A lot of aides de camp were very brightly dressed (lime green in at least one case) but this one wears something closer to the prescribed (ignored?) pattern.

Next up. More of the same including Cazadores in 'British Uniform'.

Well, a wonderful start to your Spanish project. I particularly like your treatment of the horse artillery gunners. These are superb conversions and I admire your conversion skills.

I have settled for the stock horse artillery figures produced by Eagle Figures. I believe they are the only company that produce mid to late war Spanish Horse Artillery figures.

Well done! I look forward to your next installment.

Lovely work as always. Spanish are so often under-represented, nice to see such a solid force taking shape.

These are looking very fine. Having ploughed through an awful lot of Spanish reference in creating my own army I fully understand your bafflement in trying to figure out what they wore when! At least you are working on Post 1812 - before that it was a real free-for-all!
I especially like your battery conversion - not an artillery unit I have seen before, very exotic!

They are splendid and I can't wait to not only to see those Spanish painted but actually doing their stuff on the tabletop. Much maligned because they lost most engagements they persevered to the end and final victory (with the help of allies of course). Strangely you could describe the American Revolutionary army in similar terms but they seem to attract plaudits rather than brickbats - I've never seen a set of rules describing them as permanently surprised.

A great start to the Spanish project. Spanish uniform and organization information can be a nightmare! I greatly enjoyed my Spanish project (I did 1808/1809 uniforms), and have 2 new units of Cavalry to add to the mix now (once I paint them, of course). The Spanish remind me a bit of Republican Rome vs Hannibal - defeated repeatedly, but seemingly always able to raise still more new troops... and that without even a central government!