Going with the flow: Making rivers fast and cheap(ish)

For several years now I've been muddling through with rivers that I've made over time, mainly using perspex, for wargaming tables that I no longer own. These older tables were all somewhat smaller than the one I have now and consequently I've never had quite enough river to do exactly what I've wanted to do, especially in wider span. In the back of my mind I've been laying plans to rectify this situation, and now I've finally started to put those plans into motion.

The first new river I've made is what I now term the 'wide' one. This is for representing the widest rivers; such as the Danube, Elbe, Po, etc. Being a firm believer in the right to compress terrain, the actual distance of the span of the river is relatively unimportant providing that the river looks wide enough to do more than get your little lead soldier's feet wet.  It is simple enough to say the river is too wide to shoot muskets across, add 12" to artillery ranges when firing across it, etc. A wargame's table is only so wide and the footprint of impassible terrain is an import consideration. I decided on a span of 180 mm of water with a 30 mm bank. Incidentally, there will be two other span widths of river (a 100 mm wide river and a 50 mm wide river, both with 30 mm wide banks) which I plan to make in exactly the same way so that I have a totally integrated system of waterways. I've also decided to make enough length of each river to cover all (at least most) eventualities.

The basic material for the river is 2 mm thick MDF which I bought in 4' x 3' sheets. This is pretty cheap stuff, from memory it was less than £3 a sheet.

I undercoated what would be the reverse side with some household emulsion paint to seal it. I've been led to believe that MDF likes to soak up any moisture in the atmosphere which can lead to warping. I don't know if this is true but a little undercoat can't hurt.

I cut the straight edges, where one river section butts up against another using a Stanley knife and a steel rule, then I cut the wavy edges of the outside banks with a coping saw. A little fine sand paper was used to remove any burrs.

Next I added the banks using lengths of foam board (5mm thick) which were cut slightly deeper than the bank depth would be. Note that I cut the internal sides of the bank with a wavy edge before fixing into place with PVA glue. I used a scalpel with a 10A blade to make the cut.


Once the foam board was stuck to the MDF, the overhangs could be cutaway using a sharp 10A scalpel blade. It's best not to skimp on blades for this. I used three, in all, for doing this. I kept the slightly blunted blades for less precise work at some point in the future. 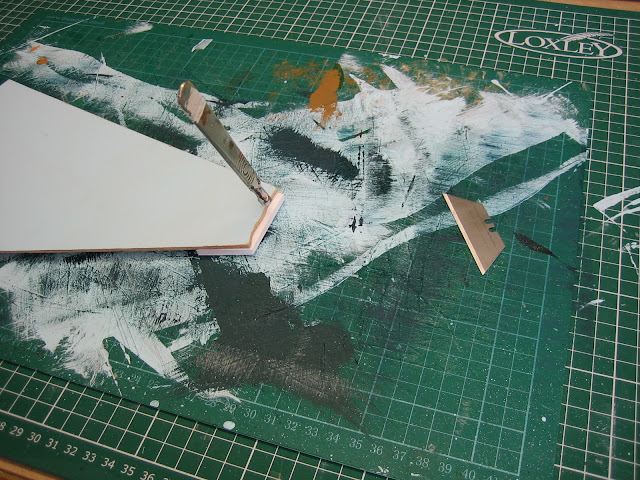 The banks are almost finished. They just need to be chamfered to produce nicer slopes. The outside chamfer of the bank was the tricky cut as I don't have a knife with a long enough blade to produce it. I had to use a handle-less Stanley blade to produce the cut - and a very sharp blade is essential here.


The inside edge is cut at a much steeper angle so a scalpel can be used.

That is pretty much it. Essentially the rivers are made and only need finishing with paint and flock. I used household emulsion paint for mine. I used a mixture of black, blue and green to get a dark colour as the base for the river and then I dry brushed it with a turquoise blue. The water was finished with a couple of coats of clear varnish (more anon). I did the banks in dark brown dry brushed with light brown, and the banks in dark green then flocked. The drying results are pictured below.

As for the painting of the water, well, it didn't turn out quite as I'd hoped. The colour looked O.K. until the varnish went on. Then, low and behold, the dry brushed blue suddenly went very bright and at least a full shade lighter. With the varnish on I thought that was it. Then, yesterday, I was finishing the painting of the third permanent bridge. I'd run out of my very clear varnish and so I had to use some old yacht varnish I've had kicking around for years, and because it's brownish in colour it gave a completely different finish to the water, especially after three coats. And I liked it more than the other colour.

I had an idea. Always a scary moment, so I sat back and thought some more. I didn't want to spend hours putting three more layers of varnish on my rivers, so what if I added a couple of thimbles full of wood stain to the yacht varnish? I slept on it, I woke up; I went for it.

This is much better and more what I was originally looking for. It's funny how things happen, sometimes.

So there you have it. Lots of river sections done quickly and relatively cheaply. The MDF used cost around £5; the foam board cost £3: the paint used cost £7.50 (£15 outlay but there is lots left to finish the other planned river section projects), the flock used cost £1.50; the varnish cost £7. Other bits and pieces I had hanging around anyway, such as blades and PVA glue, and various DIY surplus / leftovers. It took a whole long day to make and paint the river sections, start to finish, plus an hour to put on that last coat of mucky coloured varnish - which I hope dries by tonight because we're playing with it.

Email ThisBlogThis!Share to TwitterShare to FacebookShare to Pinterest
Labels: Modelling and conversions.

Don't know if you can get "snap knives" in the UK ( https://www.amazon.com/snap-knives/s?ie=UTF8&page=1&rh=i%3Aaps%2Ck%3Asnap%20knives ) but I use them to cut foam core. The extendible blade could help you in chamfering the outer bank. Plus if you get a simple sharpening device, you can maintain a sharp edge on your knife blades.

You can get them and I've used them in the past. In fact I have one somewhere, or at least the handle for one. That would have been just the ticket but I didn't have one to hand when I discovered I needed one. I'll have to dig it out and invest in some quality blades.

I think those river segments are quite good, and the final color with the brown dyed varnish turned out very well.

I feel like bridge pieces and fords are where the river terrain could get "fancy" if you wanted.

Fire at Will said...

Really enjoyed the detailed process description and especially the use of wood dye. I might try using it neat on the batch of canals I have to make.

Those rivers are very effective, and the brown lacquer really helps tone down the blue.

Very inspirational report that makes me want to give it a go.

Excellent “How to “ piece which I will come back to religiously. Thanks James.

Excellent result! Color of the water looks is very pleasing.

A really basic and simple way with a great effect at the end. I like the dimension and proportion very much and its flexibility on the tabletop. Well done! Thank you for this report.
Peter

This was very instructive and your results are splendid. Encouraging...! Many thanks for posting this.