Bulking out a command stand: A roadside shrine

I'm in the process of sorting out the last batches of figures to finish the Anglo-Portuguese and French armies.
I had always planned to do a second corps command stand for the French (because I can see two corps commanders featuring at the same time) and consequently, I've had three mounted figures and a couple of foot figures to do this in my lead pile for a long time.
I hadn't planned anything similar for the Anglo-Portuguese but I had thought about having a Beresford command stand (I even painted him). Then I decided he was surplus to requirements and didn't rebase him when I rebased the other officers.
However, whilst rummaging through the bag of odds and sods (left over from the project) I came across another unused British mounted officer. That would be two mounted figures, and I have an unused painted foot officer and an unpainted sergeant marching with his partisan over his shoulder: But, that is still not quite enough for a full C-in-C stand. Could I use a 'stand filler' as the extra piece I would need? 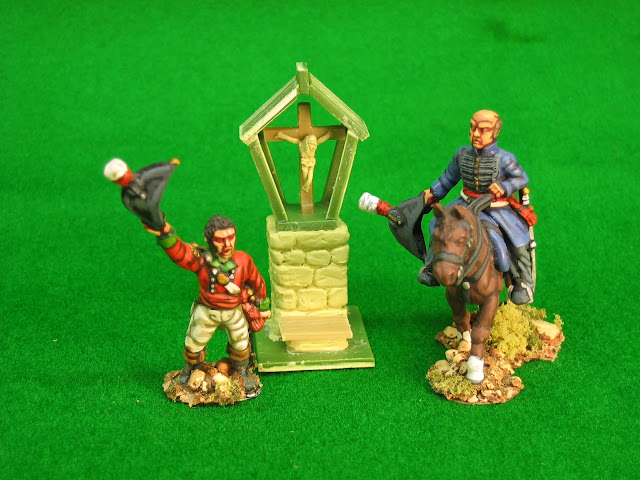 I could make a signpost as a filler, or a blasted tree trunk, or what about a roadside shrine! A shrine would not be out of place in a very Catholic Spain.

A roadside shrine could be quite big, at least as big as a figure, and it would be more eye catching than a signpost, or a tree stump. 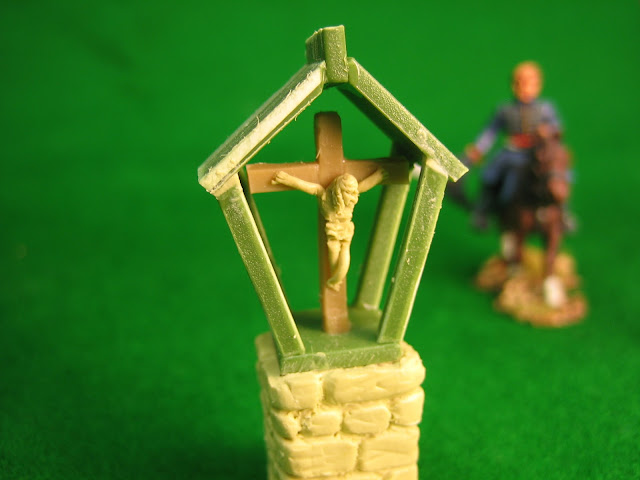 I'm not a great model maker, average at best, but even I could probably manage a cross in some kind of housing, perhaps on a Milliput stone plinth with a kneeling step.
I had some bits of plastic (Perry plastic bases and Airfix bits) I could cut up to make the cross and the housing, and Milliput is always to hand, so I got to work.
Then I decided that a proper crucifix might look better - more eye catching - than a plain cross. Sculpting is something I'm not very good at at all but, the Christ figure would be tiny and being such a recognisable thing only an impression would be needed. Out came the Milliput and in a jiffy I had this little piece of treasure - it's not that good but, you immediately know what it is.
I'm not sure how I'll paint the crucifix. Perhaps as a brass Christ on a wooden cross, or perhaps all wood, or all brass. Not being all that up on early 19th Century Spanish shrines I'm open to suggestions.
BTW, the plinth isn't a solid lump of Milliput. It's actually a block of balsawood with a coat of Millitput applied to the outside. Other construction is all visible. 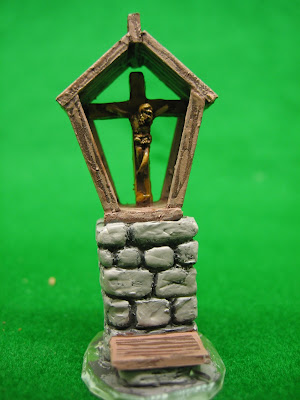 Edit: I have painted it up with a carved wood crucifix (which I could always, and simply, repaint as brass) and I think it looks pretty good. 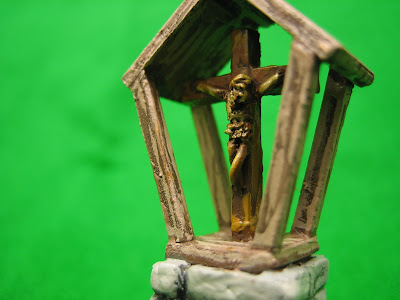 Here is a close up of the Christ. You can see just how simple I made the construction, with rolled Milliput for arms and legs - position, more than detail, being everything.

It’s beautiful!
I vote for a completely wooden cross and I stand ready to receive updates!

That works really well. I'll look forward to seeing it on the base.

Good idea for a command stand, can't go wrong with a wooden crucifix in the shrine. Very 'Last Valley' although that is a different period.

Picking themes for command stands can be tricky, but usually rewarding. Be watching for the finished stand.

That is a clever bit of inspiration and very well executed.

Such a thing would definitely be made of wood, but the figure of Christ would commonly be painted in "realistic" colours. That's what Catholic iconography is like.

I had a occasion to make a bunch of wayside shrines or "calvaries", when I modelled Bohemia for the war of 1866. There is a plastic model railway set of a little chapel and loads of religious statuary. I think it's by Faller.

I like the idea and the modelling but surely a Catholic shirne is lkely to be painted in quite bright colours?