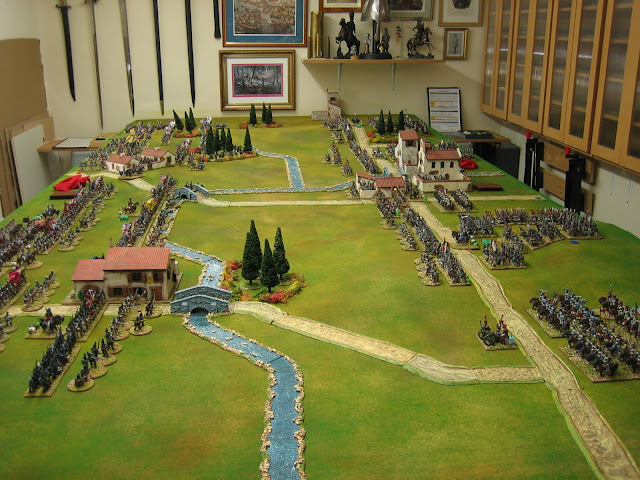 This week we started a fictional encounter battle between my French and British forces. I set this game up to get a feel of how the rules cope with a lot of troops and multiple players - in this case two a side, each controlling four division sized command groups. I'm not using all the troops I have but there aren't too many left in the cupboard.
So we can concentrate on the game rather than the overall aesthetic, I have kept the terrain very simple, just three hills, a small river system, a few woods, one large and three small villages linked by a road network. There are no extra terrain pieces to make the game look pretty. 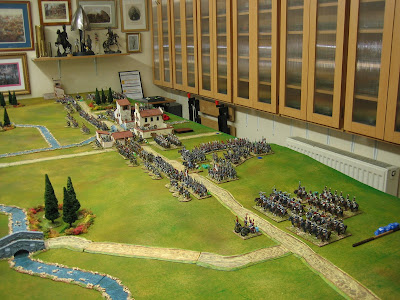 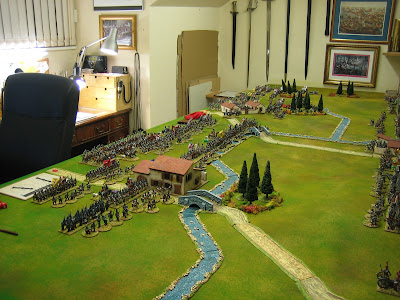 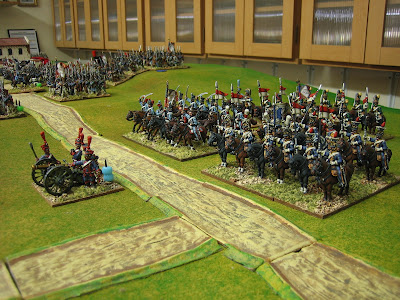 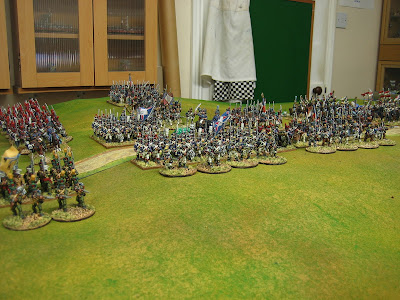 French left: A six unit infantry division with two batteries of guns.
Note the Polish troops of the Vistula Legion. I have quite a lot of foreign troops in my French army: I think the term is 'eclectic'.
Behind on to its right, a two unit reserve of converged grenadiers. 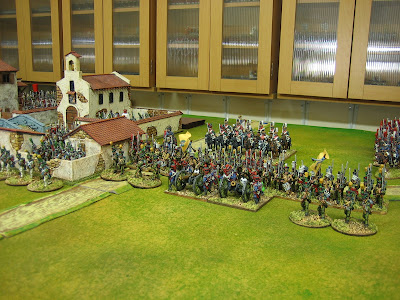 French centre left. Four units of infantry, two in the large village, supported by two gun batteries. They are backed by a single unit of dragoons detached from the cavalry division.
The infantry in the foreground are Nassau troops in their distinctive green uniforms. This formation is very foriegn because it also has the Legions Du Midi and Hannovrienne. Very pretty foreign troops for the French to play with. 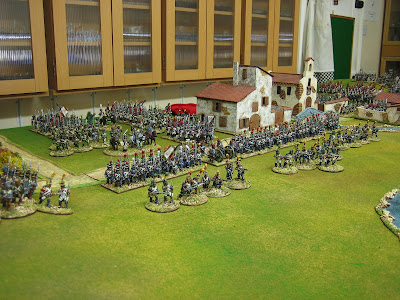 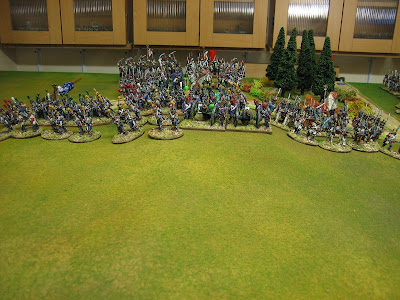 French right: A five unit infantry division supported by two batteries. They are holding the French end of the table wide ridge.
It includes two units of Swiss. 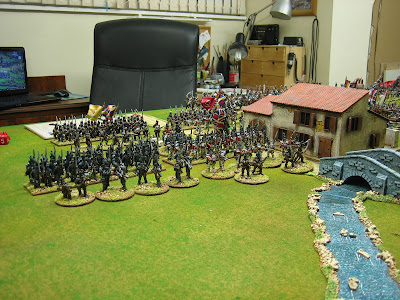 The British right: A five unit infantry division (7th) and a battery of guns occupy one of the small villages. This is a very colourful division, called the Mongrels because of the variety of coat colours.
This is game is the baptism for  Brunswickers and 51st Light Infantry. 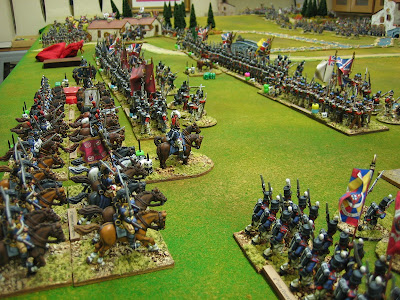 Just behind them and to their left is a two unit cavalry brigade. None of the British cavalry in this battle have seen the table before (hence the mix).
Then, what is effectively 'First Division', is split into two commands, eight units and two batteries in total.
First Division is another interesting group because it comprises Highland units, the Guards and KGL. 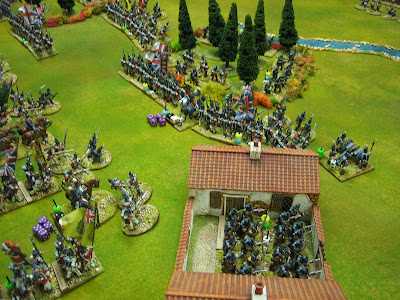 To the left of first division, occupying the central small village and some woodland are the six units and battery representing the elite troops of the Light Division. 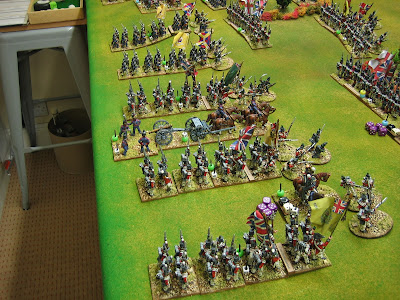 Behind the Light Division a 'standard division' of five Anglo Portuguese infantry units plus a battery deployed in column of companies and ready to move as a mobile reserve. 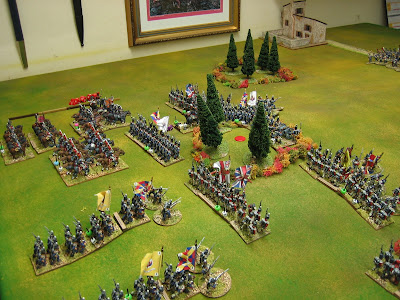 The British left: A 'standard division' and a cavalry brigade. 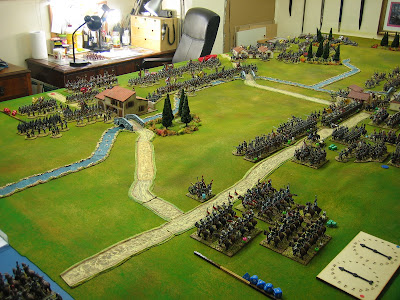 I took the French left. My orders, to attack Graham's 7th Division.
Note the initiative clock, dice my measuring stick.
All measurements in the rules are based around 3" graduations. I made four oak measuring sticks graduated in that fashion and they are proving to be very popular. I don't think I saw a tape measure (one provided to each player) in use all night - excellent! 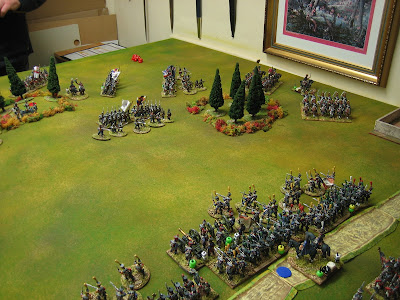 Peter, holding the French right had guessed correctly. Mark, taking the British left, would attack.
The quotes from the film Waterloo began. The game was going to be a jocular one. 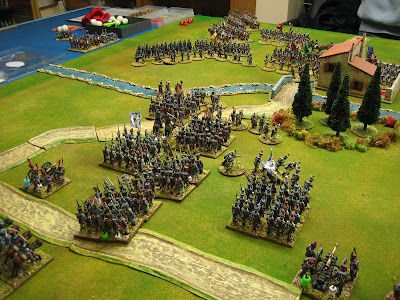 My French began their march towards the river, veering obliquely to bring pressure on the British right.
Graham began to deploy to meet my assault which, due to the vagaries of the sequence deck, stalled whilst the infantry awaited the advance of their 'supporting' cavalry. 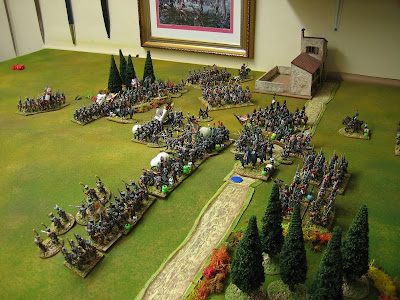 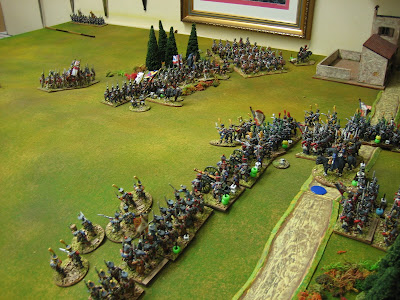 But Mark's attack is blunted with heavy loss, especially to the Portuguese which are blasted to pieces by French canister.
Mark's dice rolling was shocking. At any moment I expected him to pull his mask off to reveal Peter underneath. 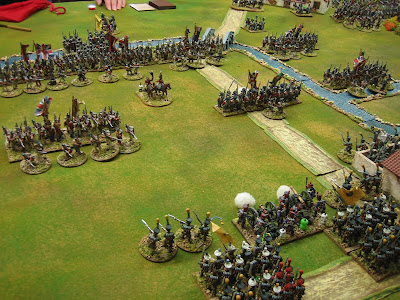 Seeing the French veer off to the flank, weakening their centre, First Division attacks across the river. It too suffers greatly from the attention of the massed French guns.
The French rolled high with their artillery all night, whilst the British rolled low. The casualties were consequently horrendous.
That was it for the first night's play, the game was well underway. With a bit of luck, it should be all done and dusted in the next session.
At the top edge of the picture, you can see the British 24 card sequence deck (brown card sleeves). Sequence decks (one per side) determine each side's turn sequence of moving, firing, melee and command actions. 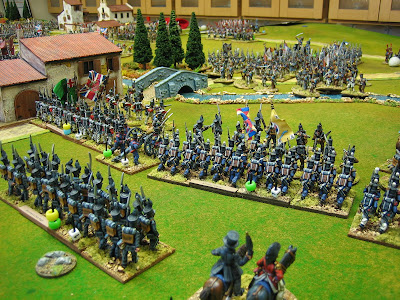 A view of my attack from behind Graham's line. Likewise, a view of First Division's attack towards the large village.
Note the red draw string bag in the background. This holds the French dominoes for determining initiative points. We pulled some right crackers out of it, gaining a whole turn's worth over the British in the deck cycles played. 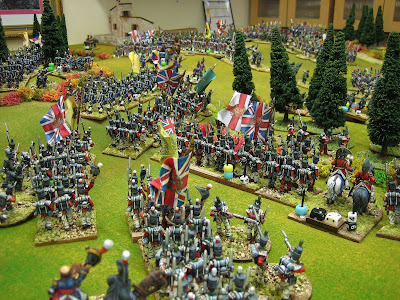 The Reserve division (left) is moving to support Mark's initial attack.
Having this amount of British and French troops is making me think towards the time when I can do a Peninsular campaign. Although it will have to be a bit scaled down, troop numbers wise, I definitely have enough for the job - big battles (like this one) would still look pretty big, I think. Can't wait to start painting the Spanish - but, still three French units to do.
at January 20, 2022

Wonderful photos! Really inspiring to see so many 28mm figures on a games table.

Looks great, James. I think you'll enjoy painting the Spanish; I certainly did a few years back!